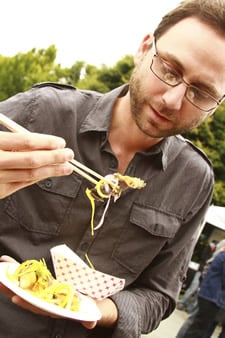 My name is Andrew Wilder, and I write this blog for a couple of reasons.  For me, it’s selfish; it helps keep me on target and eating healthfully. But I hope it’s more than that. I hope it helps you. I want it this to be a supportive community that will be a tool for all of us, to keep us motivated and learning, eating and living the best we possibly can.

I’ve loved real food long before the term “foodie” even existed, and recently decided to make healthful living and eating a primary focus in my life. In early 2009 I had my “ah-ha!” moment, and started eating better and exercising regularly.  It immediately started changing my life for the better, and I wouldn’t shut up about it.

Following my passion, I left a career in lighting design and then started Eating Rules in 2010 to help others find the same joy in healthful food. A few months after starting the blog, I issued the October Unprocessed challenge, in which I try to get as many people as possible to eat no processed foods for the entire month. (It’s been growing every year: In 2014, more than 22,000 people took part!)  I now earn a living as an internet consultant, and am the founder of Healthy Ads, an online advertising network that connects truly healthful companies with health-focused bloggers and their audiences, and I still work in the theater every so often.

When I was fifteen years old, I decided to become a vegetarian, for pretty much all the reasons someone would: Animal rights, environment, and health. It was a clear-cut, absolute decision. I would not waver or need willpower; this was simply the way it was. A line had been drawn, and I never crossed it.

At first, I was very excited — finding lots of new and interesting foods, reading books, talking with other vegetarians, and working hard to make sure I was smart about what I was eating. Over time, however, it became more and more difficult to eat healthfully. Although the college dorm provided veggie options, there was a lot of cheese and pasta. Then, when I started working — which involved a tremendous amount of travel — it got even worse. Fries, pasta, and breads became the norm. And don’t forget the cocktails!

Then, sometime around 2005, I found I had a harder time focusing, my short-term memory wasn’t great, and I felt a bit spacey or “out-of-it.” I also continued to battle acne. After reading The Acne Prescription

, a book that presents theories on how diet causes acne, I decided to try following his dietary advice. I was skeptical, considering that this dermatologist also has his own line of supplements that he’s selling, but I figured I had nothing to lose. (Traditional treatments, such as antibiotics and Retinoid Creams, had helped, but certainly not been a cure.)

So,  I cut out coffee and high-glycemic foods, and started eating seafood again. Eating that Salmon Salad (from a cruise ship buffet, no less… don’t ask) was one of the hardest things I’ve ever done in my life. I had to cross the line I had drawn so many years before.

Once I became comfortable with eating seafood, there was no stopping me! Oh, the variety! Shrimp and scallops and fish tacos! Lobster? Yes, please! I was loving all these “new” foods that I could eat. I had so many choices!

What followed was an important chain of events. Although my mental acuity came back (though some friends might argue that point), the acne continued to be a problem. I slowly, and without realizing it, gained about 20 pounds. Then, at the end of the summer of 2008, I found myself suddenly out of a long-term relationship.

By the beginning of 2009, it was time to start dating again. My new year’s resolution was to try online dating. It was time to get over any stigma I still had and give it a shot. Writing my profile made me realize that if I started dating again, I needed to start looking and feeling better.

Around the same time, I had my “Ah-Ha!” moment. I was walking through a parking lot — on perfectly level ground — and realized I was tired and my body simply didn’t want to move. I felt as if I was walking through sludge, and I thought to myself, “Self, I’m thirty-two years old. I shouldn’t feel like this.”

So I decided to try Yoga.  I started following some great Yoga Video Podcasts, practicing 20-minutes a day in my living room (where nobody would see if I fell over!).  Within just two weeks, I felt more limber and better able to move.

Around the middle of February, I started to wonder how many calories I consumed in a day. I had known for a long time that I should eat around 2,500 calories, but that was the extent of it. I had no idea exactly how many I was eating. So I started jotting down everything I ate on a post-it note. (The next day, I realized there’s a wonderful, free app for that).  Recording everything I ate into my iPhone was so enjoyable and so exciting (yeah, I’m a dork) that I tracked my calories for two months, without fail. Every day, I logged my weight, everything  I ate, and all my exercise. It particularly helped that exercising would subtract calories from my total, which meant I could eat more!

Next came my discovery of The Abs Diet

— a great book with a lousy name. It’s really an eating plan, not a weight loss gimmick (though it does help you lose weight!). It involves eating from twelve different food groups (nuts! low-fat dairy! low-fat protein! berries!) which are all delicious… and then there’s the wonderful thing called the cheat meal.

Not surprisingly, those twenty extra pounds came off pretty quickly.  I kept doing yoga, and I started running.  Within another couple of months, I was — after all these years — getting a runner’s high!  I loved it! And, my acne even improved!**

Recently, a good friend of mine told me, “You found fitness Jesus!” Indeed, I did. Healthy eating and exercise became a huge topic of conversation for me. I have several friends who are also interested in the subject, so we would spend hours and hours chatting about it and cooking meals together.

As I continued my education, reading Michael Pollan, among others, I started to notice a lot of patterns in everything I was doing.  I realized that — on top of the twelve Abs Diet rules — there were some other themes, if you will, that I found helpful.

I eventually distilled them down into three simple, yet very powerful, eating rules.

If you can follow all three of these rules consistently, you’re most of the way to beating the system of the American Diet. It’s not easy, but it is simple.

** Regarding Acne:  I saw four different dermatologists about my acne.  Not a single one of them mentioned poor diet or lack of exercise as a possible cause of my acne.  They prescribed drugs instead — topical treatments and antibiotic pills, some of which improved the situation, but none solved it.  My experience has shown me that diet and exercise do indeed make a HUGE difference in improving acne. Why not try it before you take powerful antibiotics or use lotions that keep you out of the sun and make your skin peel off?