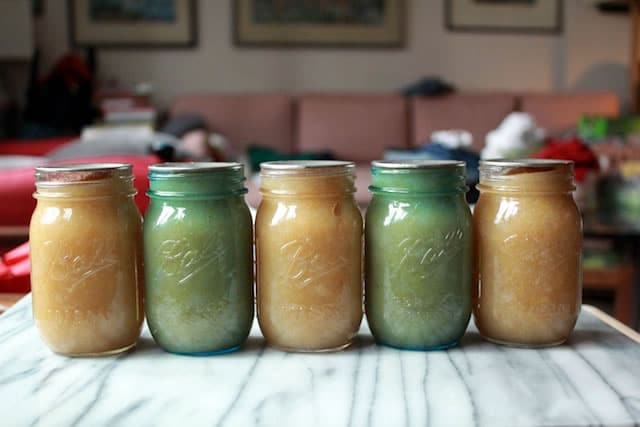 As a devoted home canner, I sometimes get swept up in the idea that the more I do or add to a batch of preserves, the better. Recently though, I was reminded that the simple approach is often the most delicious (and it’s always the easiest, to boot).

Over the course of a recent week, I found myself the recipient of nearly 12 pounds of apples and pears. The apples were leftover from a friend’s CSA share pick-up and the pears were a gift from a lovely couple that took a class with me. 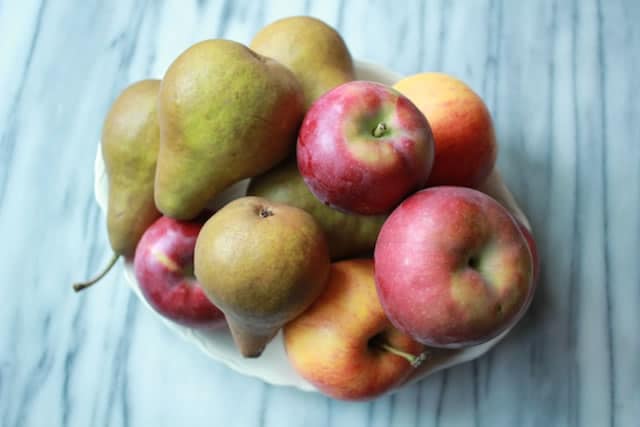 I spent a couple of days enjoying seeing the bounty of autumn fruit on my dining room table before determining that it was time to preserve. I contemplated a number of different recipes before deciding that at least half of the fruit was destined for a batch of sauce.

Still, I thought that I was going to make a complex, highly spiced sauce. I peeled, cored, and diced half of the apples and pears, and heaped them into a Dutch oven with the juice from one orange and two lemons. I added an additional drizzle of water to ensure that they wouldn’t stick to the bottom of the pot. I put a lid on the pot and turned the heat to medium low. 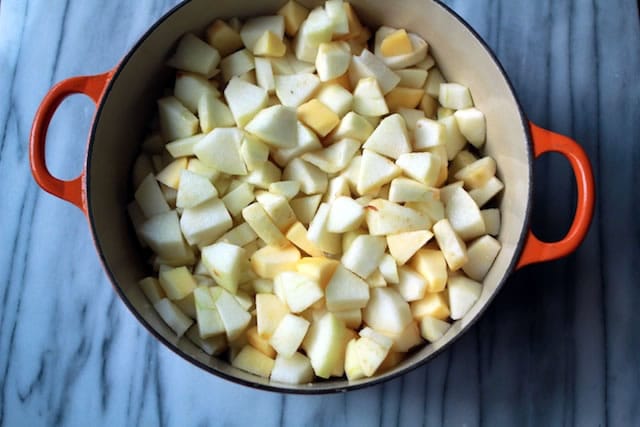 I let the fruit soften for the better part of an hour, stirring occasionally when the thought occurred. Then, because the hour was quite late when the sauce was nicely textured, I simply put the lid on and slid the pan off the burner, promising myself that I would add spices and sweeteners in the morning.

Only, the next morning, when I went to taste the sauce, I realized that it didn’t need a single thing. The apples gave it plenty of sweetness, while the pears added a pleasantly grainy texture. The small amount of orange and lemon juice I’d included offered the necessary tang. It was perfect just as it was.

I brought the sauce back up to a boil and canned it in pint jars (city living means that I have a comically small refrigerator. Unless something is destined to be eaten in the immediate future, I try to make it shelf stable). Simple, delicious, and only processed in my kitchen and by my own hands. Just the thing for October Unprocessed! 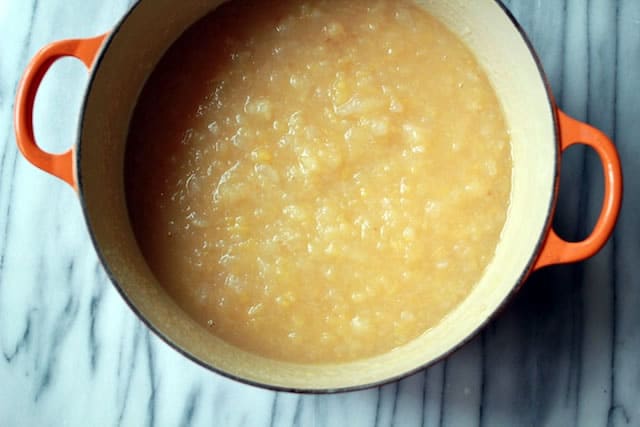 The apples gave it plenty of sweetness, while the pears added a pleasantly grainy texture.

To make the Apple Pear Sauce, which can be refrigerated for up to two weeks:

If you prefer to can it for shelf stability, follow the instructions below:

3.0K shares
When It’s Okay to Burn Your Food
A “Figgy” Fall Salad

Very nice to have found this recipe. Everything clearly explained.

I would like to try this, but I did a recipe with vanilla and a little spice a while ago that was really good and would like to get that flavor. Can I vanilla and perhaps a bit of cinnamon without jeopardizing the safety of this as a canned product?

Also, I have a large crop of Asian pears I would like to use along with our apples, but not sure if that would be safe, given in your book you say this is a lower acid fruit. Hoping to hear back from you!! Thank you!!

Tried this for my first canning project today. It tastes great & it all seems to have sealed so fingers crossed I didn’t mess anything up.

What headspace should be used for the canning jars? I’m guessing 1/2 inch.

Yep! Whenever a recipe doesn’t specify, opting for 1/2 inch is always a safe bet.