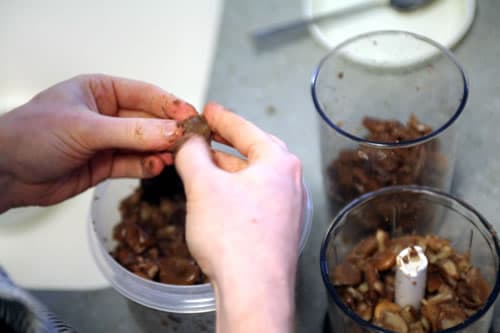 A few months back Matty and I picked up a one-pound bag of dried fava beans. As with most beans, they’re high in protein and fiber, while being low in fat, sugar, and sodium (unless added!).  Favas are also a good source of vitamins and minerals (especially folate, manganese, copper, phosphorus, magnesium, and iron).

The directions on the bag said they did not need to be soaked and merely to “Cook until soft.”  We did a bit of googling, but most of the recipes we found called for fresh favas, and we didn’t have much luck finding more specific directions.

Turns out, if you go straight from bag to boiling, you’ll be waiting about three hours for those beans to get soft. That’s not the real problem, though: They have a tough outer shell that you’ve got to get rid of somehow. We boiled them until the bean inside was very soft, but the shell didn’t really loosen up much.  So to get at the morsels inside, we Matty had to painstakingly, bean by bean, peel them apart by hand (I was busy taking photos, naturally).  It was a messy process. 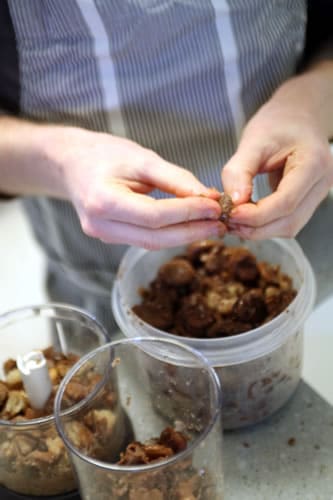 Turns out what we should have done was ignore the vague directions on the package, and instead soak the beans overnight.  Then, after the soaking, it would have been far easier to peel them (still have to go one at time, though!).  After peeling, it would have taken only about an hour or so to cook the beans the rest of the way. 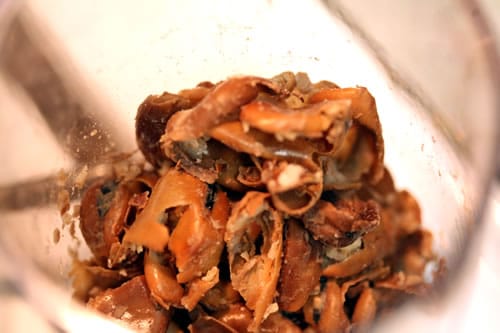 Even so, our Rosemary Fava Bean Pate turned out quite lovely.  Click over to Matty’s blog for the recipe and his take on the fava experience. 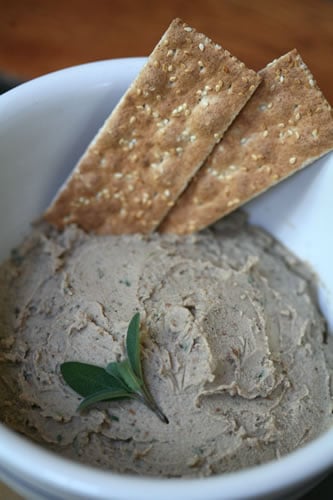 When I was growing up in Los Angeles, I learned this from our Armenian diaspora neighbors who migrated from Iraq. Simply boiling them outright for 3 hours without soaking first gave them stronger flavor, but the difference is negligible. The juice tasted almost like beef stock! What they did was break pieces of pita, or their Armenian Lavash in the bottom of deep dish or bowl, pour the magic juice to soak the bread, sprinkle the cooked fava beans on top, then a fried sunny side up egg on top, then sprinkle an herb they called “butnig”, which I understand to be dried wild mint (I googled it). They had invited us (my family) a few times to dine with them. Among other insanely delicious food they cook, I thought I would tell you about the fava beans one that we though is the ultimate comfort food. My mom got… Read more »

In the Middle East dried Fava beans, with skin on is a staple. These are the small dried beans. We make a dish that’s called ful medames. This dish is eaten breakfast , lunch and dinner. Very delicious, inexpensive and high in protein. They are eaten skin on in this very common and popular dish. You may be confusing the Fava beans used to make falafel. These are split, peeled beans. They are sold pre-peeled. No one would actually be silly enough to manually peel each bean…. soak well and cook until very tender – no peeling.

Okay, so leave the skin on for ful. I’m trying to make it because I have had it out and love it. I’m making a batch from driec beans now, but have peeled them and now boilng the beans.

I’m using big beans, so pretty tough skin, does that make a difference because a lot of people say the small beans are fine (below)

I just bought dried Fava beans from the market and soaked them overnight. They have a very yeasty smell like bread dough. Is that normal?

I don’t understand all the hype about removing the peel from dried (yes dried) fava beans. I just cooked them for the first time. I soaked them overnight in water (12 hours), rinsed them under running water, cooked them in a light boil (pot was half covered with pot lid) just plain water I didn’t even add salt. One hour and 15 minutes later, I have a delicious lunch. To me the fava peel adds flavor and nutrients, and after eating them I am still alive to write this. I cooked “Ziyad brand Small Fava Beans”. I hope this helps anyone who is anxious about cooking fava beans for the first time.

I grew up in Poland where eating fava beans is an annual summer ritual. They’re awesome boiled fresh, and when they’re a young crop you can eat the skin as it’s very tender. Later in the season you just bite the end off and push out the bean from the shell and leave the shell on the plate. I miss them so much. I just bought a bag of dried fava beans and found this site. I will soak them overnight like my mother used to do with other types of dried beans to use for soup or other dishes, and boil in slightly salted water until the inside is soft but not too soft. I hope they will turn out much better than the canned ones which are too soft, soggy and salty.

A pair of Channel Locks, squeezed on the “seams, pops the bean open nicely, except it MAY break in-two the meat inside. (I don’t care)
Then cook
I will also try a suggestion of cooking and eating with hulls on.
(Use a nutcracker if you have no Channel Locks)