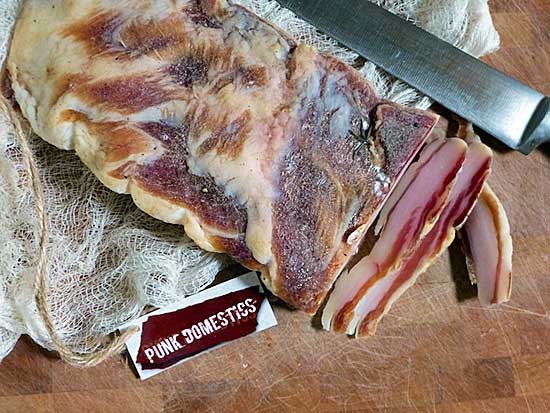 I make no secret of my love for cured meats. In fact, after well over a decade of vegetarianism, the lance that cracked my armor was a single piece of salame. My husband and I were on our first trip to Italy. After spending several days in Rome, my cousins drove us through some of their favorite hill towns in Tuscany before depositing us in Siena. One of the towns was Montepulciano, a noted center of wine making. We stopped at a cantina to taste some wine, and there they had a small board with a salame on it. “You should try it,” my cousin said. “They make it on the premises.” I thought to myself: I did not fly 5,000 miles not to taste that salame. And with that one bite, so began the gradual dismantling of my abstinence from meat. The final stake was driven into its heart during a month in Spain, in which I would have starved in the streets had I not caved in to carnivorism.

Today, I don’t just eat meat; I consider it a contact sport. As if it wasn’t enough of a learning curve to learn how to cook and eat an entire kingdom of food that I had ignored since my college days — and truly, you could spend your entire life honing the craft of cooking meat — I eventually came full circle and trained my eye on the thing that brought me over to the dark side to begin with: Salumi.

With last year’s Charcutepalooza challenge, which I supported on Punk Domestics, I became aware for the first time that making various forms of cured meat is actually feasible in the home. In retrospect, it was obvious. Like most traditional foods that we have come to take for granted as being grocery store staples, charcuterie and salumi have their roots in the rustic kitchens of medieval France and Italy. Salt had long been used to preserve meats (think jerky), and over time butchers and cooks learned to finesse the quantities of salt, the time curing, and the conditions in which the meats would hang to develop ever more refined products.

With the release of Michael Ruhlman and Brian Polcyn’s latest book, Salumi, which focuses specifically on the Italian tradition. I’ve kicked off a mini-Charcutepalooza, the Festa di Salumi, to encourage folks to try their hand at making their own salumi at home. Already I’ve worked with a friend to make finocchiona and porcini salame, and I have a few more projects up my sleeve yet. 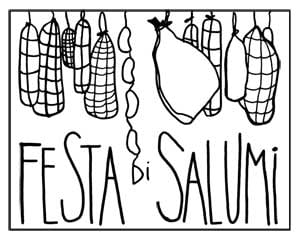 Now, I know not everyone is going to up and make their own salame. It’s a pretty complicated process, requires some skill with grinding and stuffing casings, and requires a rather particular setup where you can hang them in a chamber where you can control the temperature and humidity carefully. Moreover, it requires the use of sodium nitrate, and although the health risk of nitrates is in fact negligible, that puts it just outside the scope of the Unprocessed challenge. While it’s true that celery juice is positively teeming with sodium nitrate, I doubt any of us has a laboratory-like setup to extract precise amounts of it from the juice.

But that’s fine, because there are a few forms of salumi that require nothing more than meat, salt, spices and time. Whole-muscle (or muscle and fat) cuts are not prone to development of the spores of the Clostridium botulinum bacteria, which can occur in anoxic environments like in the ground meat inside a casing (this is what the nitrates serve to eradicate). They’re also far more forgiving with regard to curing environment. In fact, you can hang them right in your kitchen. Case in point is one of the simplest, and yet most delicious, meats you can make: Pancetta. Basically, it’s Italian bacon. You like bacon and Italian things, right? Thought so. Let’s get started.

The first thing you’ll need is a hunk of pork belly, preferably with skin on. (Pro tip: If you can land yourself a hog jowl instead of pork belly, then you’ll be making guanciale, which is approximately a million times better.) To get a proper cure, you need sea salt equivalent to 3% of the weight of the meat. In other words, for each pound of meat, you’ll need ½ ounce of sea salt. Now, odds are you did not purchase precisely one pound of belly, so I recommend weighing the meat in grams on a scale, and weighing your salt accordingly. My belly was 780 grams (my pork belly, that is — I wish my belly were that small), so I measured out 23 grams of salt. To that, again per pound, add ½ teaspoon each black peppercorn and juniper berries, crushed, one clove of garlic, minced, one bay leaf, crumbled, and one sprig of rosemary. You can futz with the quantities of the spices, just not the ratio of meat to salt. 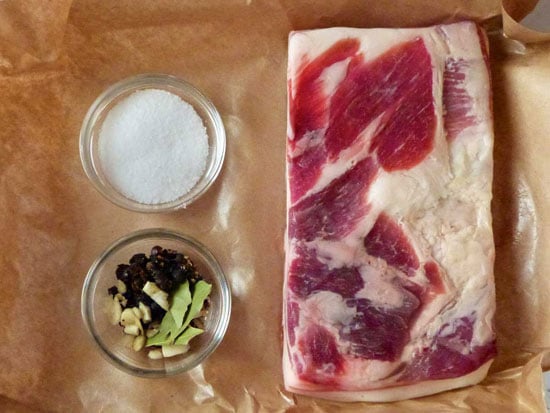 Mix the salt and spices well. Lay out a sheet of cling wrap and set the belly on it. Rub the cure all over the belly, coating all the surfaces. Wrap the belly and all the cure together, tightly, in two or three layers of cling wrap. Place in a dish large enough to hold it and put in the refrigerator for five days, turning at least once to redistribute. 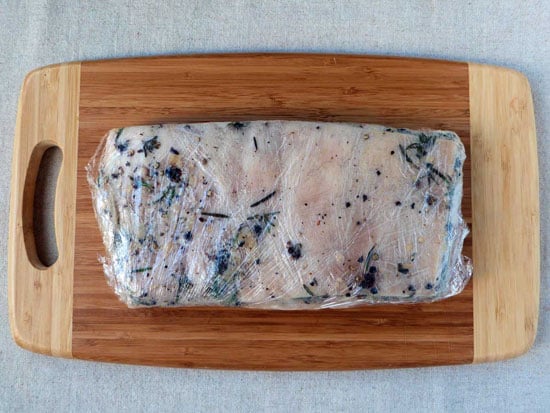 On the fifth day, unwrap the pancetta and rinse off the cure in cold water. Guess what? You have made pancetta. Behold your amazing powers!

Well, sort of. At this stage it is completely usable as pancetta, as long as you cook it. You can cut it and fry it up for whatever purpose you like. But if you want to go the extra mile and intensify its flavor, you gotta hang it. The hardest part about this is learning how to do a little belly bondage, but trust me, it’s not that tricky.

Wrap the belly in three layers of cheesecloth. Wrap a length of twine around the pancetta about an inch from one end, and tie it off with a square knot, leaving a foot or so of loose twine on one end. 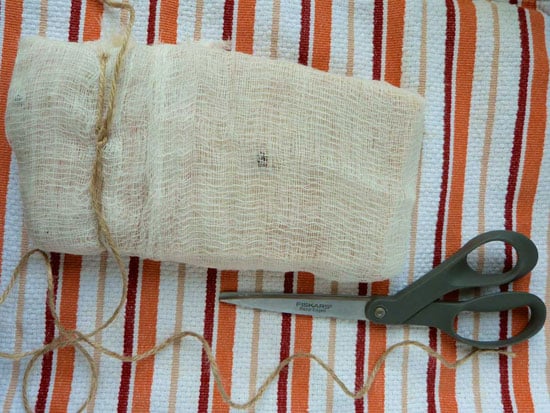 Make a loop with the twine. Wrap the loop over the far end of the pancetta. Pull the loop back toward the first knot, stopping about an inch from the first knot. 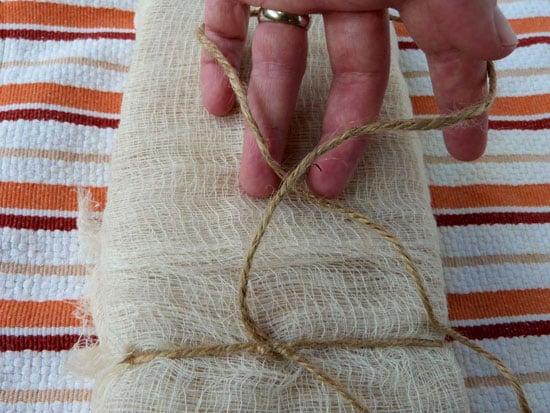 Pull the twine tight, make another loop, and repeat until you’ve gotten to about an inch from the far end. 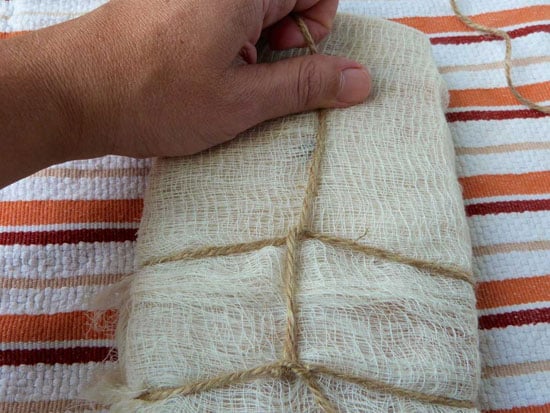 Flip the pancetta over. Wrap the loose end of the twine around each of the loops on the reverse side. 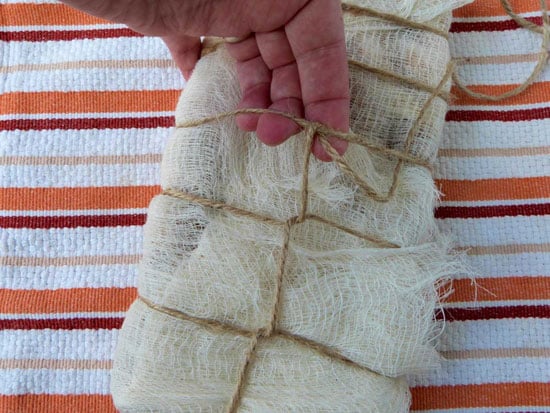 Tie off the two lengths of twine with a square knot. Leave several inches loose twine to use to hang with. 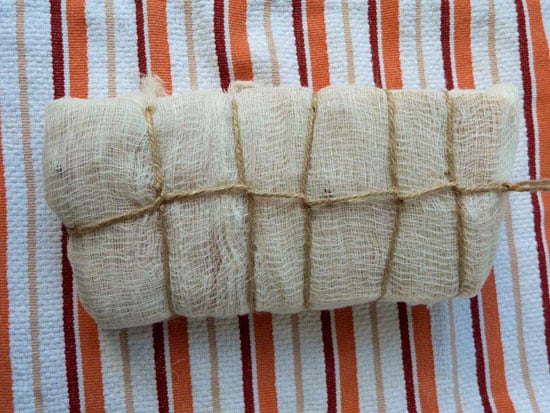 Weigh your pancetta. Jot down the date and weight on a label, and hang it on the twine. Adorable, Punk Domestics-branded labels are not strictly required, but, you know, nice. 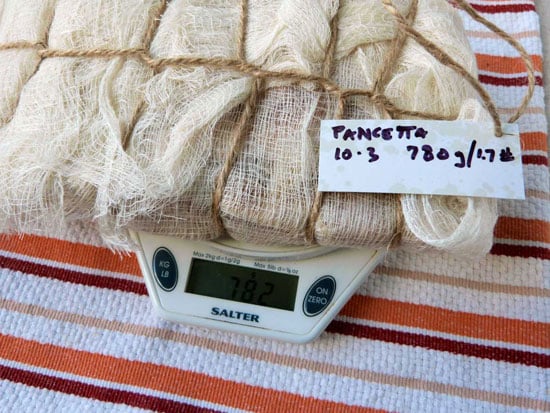 Hang that puppy! As I mentioned, you can do this more or less anywhere, but optimal conditions will be a place that is cool, slightly humid, with good air movement and dark. I happen to have a basement. Garages are nice, too. But, in a pinch, a corner in your kitchen or under a staircase make suitable spots.

Weigh your pancetta frequently. When it’s lost 30% of its weight at hanging, it’s good to go. For example, since my belly was 780 grams, my target weight was 546 grams.  You can pull it sooner than that, but unless you lose the full 30%, you will need to cook your pancetta before eating (which you were probably going to do anyway).

When you unwrap your belly, you may spy some wee spots of fuzzy white mold. This is fine; in fact, it’s the same white mold that salumieri deliberately add to salami and other salumi. Green mold is also fine. Both of these can just be scraped away before eating. If you see black or red mold, dispose of the pancetta. But this is very unlikely, unless the environment where you hung the pancetta was too humid or lacked sufficient air movement.

You may now cut into your pancetta and fry it up for whatever you like. Myself? I rather like pasta all’amatriciana, the classic Roman dish, which is basically just crisped lardons of pancetta in a simple tomato sauce with a little chili pepper. Absolute perfection. 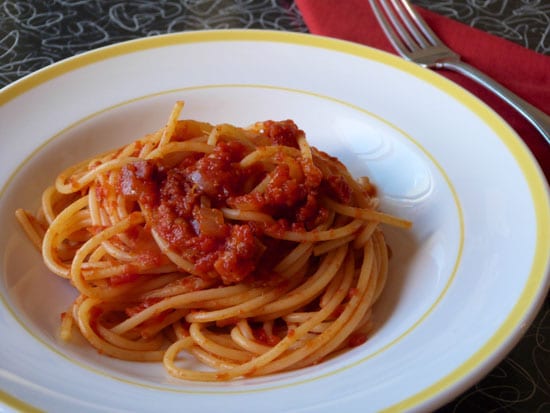