Linda Miller Nicholson writes the aptly-named blog Salty Seattle, and is known as much for her sassy stilettos as her sous-vide.  She’s a conscious omnivore, food-sorceress, and slow-food salt-maker. She lives in Seattle, Washington, with her husband Jonas and their toddler Bentley Danger. (Yes, that’s really his name). You can catch up with her, or at least try to, on Twitter. 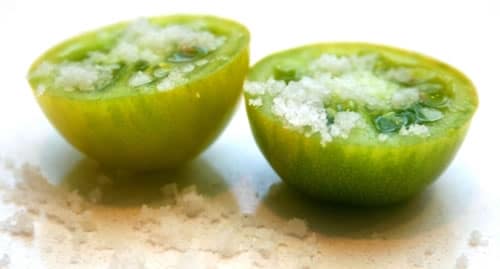 To know Andrew is to love him, there is no way around that fact. Consequently, when he asks you to do something, the only acceptable response is an enthusiastic YES! I have a fair amount of experience in making salt, so Andrew thought it would be a great thing to share with the many participants in the #unprocessed challenge.

Andrew’s totally going to make all of us into one big, happy Little House on the Prairie family by the end of the month, so we might as well embrace it. After you tackle salt, be sure to ditch your baking soda leavening agent in favor of ground deer antler, ok? But for now, something simple. Elemental. Salt.

Back in the days when my husband and I were blissful DINK’s (double income no kids), I’d collect shoes from every place we traveled. Whether we were in Tijuana, Mauritius, or the far-reaches of Eastern Romania, I’d shove my feet in the nearest goat hair confection — the weirder the better.

Fast-forward to my present life of polyandry: I’m married to my husband and a height-of-the-market mortgage, and I make do on the diminutive salary of a freelance writer. And then there’s my toddler, Bentley Danger, who has a shoe habit that rivals mommy’s because his feet grow like bamboo on steroids. Sadly, stiletto-hoarding no longer pencils out.

During those well-shod travels, I saw a lot of seas. In every port, I found a different salt on the shelves of the local grocer. In Hawaii there is the eponymous red alaea- course ground and tasting of clay. In Sicily there is sea salt collected in pans from corraline Trapani.

Soon, I had amassed a stockpile of more than 30 salts from around the world; the only rule was I had to have visited the source. Then the salt-craze hit the US and stores cropped up like The Meadow in Portland, OR, which sells hundreds of far-flung salts. Selecting salt at the market has never been more difficult. During my last excursion to Whole Foods I counted 15+. While the choice may be hard, a little bit of finishing salt goes a long way, and different salts complement different foods. Don’t believe me? Host a salt-tasting soiree and see for yourself.

When my global collection became less precious because I could find the same stuff around the corner, I began harvesting small amounts of seawater during our travels. If we rented a condo, I’d use a combination of sunshine and stovetop evaporation to make salt from the nearest shore. I learned that salt from Puerta Vallarta tastes like jet ski fuel, whereas salt from Victoria, BC is delicate, like the lips of a mermaid. 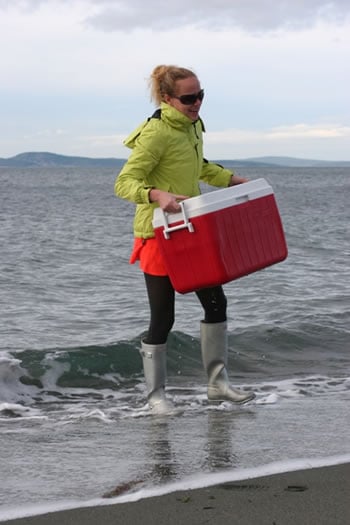 Soon, I had a major case of the self-harvesting bug.  Through a combination of trial-and-error and studying pollution patterns, I discovered my personal collection spot not far from Seattle in the vicinity of Deception Pass, Washington. One of the challenges associated with self-harvesting salt is that you need a lot of water in order to make just a few cups. The rule of thumb is about five gallons of seawater yields four cups of salt, but elements such as salinity of the water upon collection — has it rained recently? — can skew the ratio.

Always gather from an area that is clean, legal, and safe. High winds, blustery rain storms, and electric fences on naval bases are all red flags I’ve ignored. Learn from my mistakes! Calm, rain-free days on desolate shores make for easy seawater-gathering. Rain is not only uncomfortable, but it dilutes the water, amounting to less salt.

I gather water with medium-sized, rectangular, lidded coolers. Round drink coolers are buoyant and difficult to shove down in the surf, and 5-gallon water jugs don’t have a big enough opening to gather seawater effectively. To avoid silt, it’s a good idea to walk out into the surf as far as your constitution will allow. Better yet, collect by boat.

After you’ve schlepped your water home, rack it, just like wine, for a few days. That means leave the cooler untouched in a cool place, so that all the sediment and salt particles sink to the bottom. Next, siphon the clean water into a large cauldron. I use a canning pot. Do not siphon the bottom inch or so, as that contains impure sediment. Place the cauldron over low heat on the stovetop. Ideally the water should never go over 170°F, and whatever you do, DON’T BOIL IT — that will ruin the crystal structure.

If you’re processing five-gallon batches, it may take a day or two to evaporate, but keep an eye on it. Once the water level drops to a few inches, crystals will start to form. At this point, I like to remove the pot from heat and carefully (so as not to compromise the crystal structure) pour the water into a wide, shallow pan. If it’s sunny enough, I will do the final evaporation in my light-filled window box. If it’s midwinter, I give up on the notion of sun-dried salt and evaporate it in the oven, stirring gently every once in a while, with the oven at the lowest setting. This method produces better crystals because it provides more even evaporation than the stovetop. I resist over-evaporation because it weakens the flavor. Instead, I let the last of the water drip out of the salt by placing it in a tamis

(ideally) or shallow sieve for a few days.

Salt-making is an addictive adventure, but the reward is great. I always make more than I think I’ll need because news of a fresh harvest travels fast. Head seaward and gather some water before it’s so cold you freeze your thighs off. You won’t regret it. 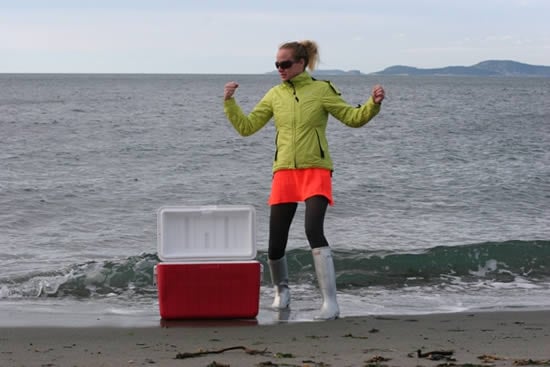 I just purchased harvested salt in a market in Ghana from the kata lagoon, so would by process be put it in water (don’t have ocean water) to take out the sediment and organisms? I know the locals use it all the time but not sure if my system could handle it without cleaning the salt or will heating it in the oven kill off organisms and just pick out the sediment before using?

We harvested salt from the Salt Pond on St John, US Virgin Islands. We let it dry in the sun while there, and then dissolved it in water when home, filtered the mud and grime away, and then boiled it to get the salt. QUESTION!!! Can we re-dissolve the salt, and allow slow evaporation to get larger crystals? you can email answers to photographybytoms AT gmail DOT com. Thanks!

Thank you so much for this simple, well orgainized procedure. I was wondering if you are supposed to keep the salt heated over night- if so, how do you acomplish that? Also, how would heating using a fire rather than a stove effect your results?
Thanks

I just boiled some Pensacola ocean and got some great tasting sea salt.!!!!!