Linda Ziedrich is the author of The Joy of Pickling and The Joy of Jams, Jellies, and Other Sweet Preserves. She blogs at A Gardener’s Table about food and rural life from a farmstead near Scio, Oregon, where she continually experiments with the produce from her orchard and large garden. 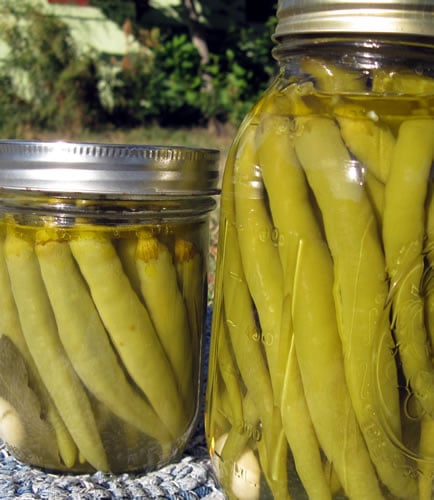 Whether you’re planning an Italian dinner or an American Thanksgiving, pickled peppers are essential on the appetizer platter. They are not only quick and easy to make one jar at a time; they’re also a good choice for a first canning project.

Your peppers can be green or ripe, hot or sweet or in between, and formed in any shape a pepper comes—round, conical, blocky, or long and skinny. Find one or more glass jars that will hold your peppers attractively. If you’re using long peppers you’ll want to pack them vertically, so compare the height of the jar to the length of your peppers; the jar should be a little taller than the peppers once their stems are trimmed. If you want to can your peppers, use either pint or quart mason jars, or try the 3-cup jars now available from Jarden (the company that makes Ball and Kerr jars).

If you’re canning your peppers, you’ll also need a jar lifter—available for a few dollars at most grocery stores—and a boiling-water canner, which can be any big pot with a rack or towel at the bottom. Fill the pot about halfway with water, and begin heating it just before you begin filling your jars.

Now start with seasonings. I use two small cloves of garlic and half a Mediterranean bay leaf for each pint. If you live on the West Coast and harvest native bay laurel leaves (Umbellularia californica), which have a much strong fragrance than Mediterranean bay, use a smaller bit of leaf in each jar. You might also try other spices, such as two or three black peppercorns or allspice berries per jar.

Before putting peppers into jars, I trim the stems to about ¼ inch. Then I make a short vertical slit in each pepper; this keeps it from floating. I pack each jar tightly, leaving a little more than ½ inch headspace at the top. Placing each pepper upright may waste some space but allows the stems to serve as handles for withdrawing the peppers from the jar.

Once you’ve packed the jars, make the pickling liquid. In a stainless-steel-lined saucepan, heat ½ cup each water and wine vinegar or cider vinegar and 1 teaspoon salt for each pint jar. If you’re planning to can your pickled peppers, the vinegar should be diluted to no less than 5.0 percent acid. If you’re going to keep your peppers in the refrigerator, you might instead use rice vinegar, which is usually diluted to between 4.0 and 4.3 percent acid.

I always use pure, fine salt, which comes labeled as “canning and pickling salt” or sometimes, in bulk, as “sea salt.” Sea salt that isn’t white, because it contains other minerals besides sodium chloride,  is usually fine to use, too, but don’t use table salt, which has additives that could make your brine cloudy, or salt to which clay, charcoal, or other colorings or flavorings have been added.

If you like a little sweetness to balance the sharpness of a pickle, add a little honey to the liquid in the pan.

Bring the liquid to a boil, and then pour it over the peppers in the jars. Wait while the peppers take in liquid through their slits, and then add more liquid to the jars as needed, keeping the headspace of slightly more than ½ inch. Now add 1 tablespoon olive oil to each jar. The oil will coat each pepper deliciously as it’s withdrawn from the jar.

If you’re not canning your pickled peppers, just close the jar tightly, and you’re done. Let the jar cool, and then store it in the refrigerator.

If you are canning your peppers, make sure you haven’t dripped any oil on the jar rims; a film of oil could keep the lids from sealing. Clean any oil from the rims with a paper towel dipped in vinegar.

A mason jar cap has two parts: a flat lid, replaced with each use, and a metal ring that holds the lid in place. The flat lids should be soaked in hot water for a few minutes before you put them on the jars and screw on the rings.

Now use your jar lifter to transfer the closed jars to the hot (but not yet boiling) water in the canner, allowing a little space between the jars. The water should cover the jars by at least an inch. Add more hot water if needed, put a lid on the canner, and bring the water to a boil. Hold it at a gentle boil for 10 minutes, and then turn off the heat and remove the canner lid. Before withdrawing the jars with the jar lifter, wait 5 minutes; this will keep the jars from leaking. Then set the jars on a rack or pad to cool.

Whether you’re storing your pickled peppers in the pantry or in the refrigerator, you’ll want to give them at least three weeks to develop their full tart, spicy flavor. So pickle your peppers soon, while they’re fresh from the farm or garden, and they’re sure to be ready in time for Thanksgiving dinner.

One of the better articles on this. I have been growing peppers five years. In the fall, I make and bottle hot sauces, but I like to have the around in pepper form all year. I used to freeze them, but last year I pickled about half of them. Eureka! Crunchy peppers all year round. This year it’s all pickling, no freezer… my wife is happy about that, as I keep the jars in the beer fridge, not the freezer. Your article here has better advice than I have found elsewhere… I probably need the book!

Can you tell me how much peppers for your recipe. Thank you, Nita

I’m pretty sure it’s a botulism risk to can pickles with oil in the jar. Might be better to add the oil when you crack the jar, otherwise you gotta find out how to pressure can them jars. Canning is easy if you follow the rules, but botulism causes paralysis… or death.

What kind of peppers are shown in this picture? I would appreciate any feedback

What kind of peppers are shown in this picture?

I have The Joy of Pickling at home! Such a great book. Once I finish off our current batch of pickled peppers, I think I may have to try out a batch of these. 🙂

This seems like a fun project! Does the pickling process kind of tame down the hotness if you use hot peppers? I like spicy but wouldn’t want it to be so hot you couldn’t eat them by themselves. Thanks for your feedback!

Pickled hot peppers do mellow in the jars over time. But I generally prefer to use super-hot peppers in sauce, though I sometimes pickle whole ones to give to chile-head friends.

Thanks for the feedback! I’m heading to the farmers market in a couple hours to see if they have anything suitable!