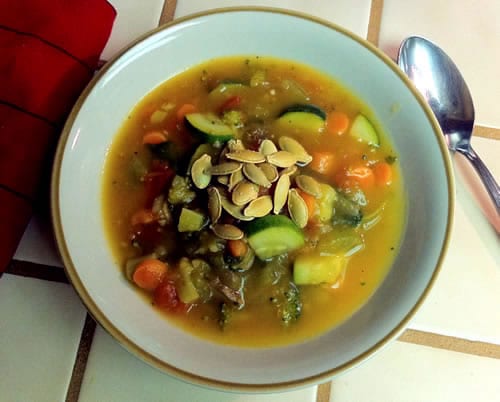 Here’s a healthful, hearty soup we made last weekend.  Add a slice of 100% whole grain bread, and you’ve got a wonderful, soul-sustaining, winter meal!

My annual new year’s party officially begins each year when we convene at the Costco in Redlands, CA, usually the day after Christmas. We grab two carts and load them up with enough food to last the lot of us nearly a week in the mountains.

This year, I was pleased to see that they had many more whole grain and organic options — including organic, cage-free eggs (we bought 9 dozen), 100% whole wheat spaghetti (6 pounds), and several different types of whole grain breads (6 sliced loaves and 3 dozen English muffins).

The biggest surprise, though, was the palette of 3-pound bags of Bob’s Red Mill Quinoa. My jaw literally dropped: Quinoa! In the Inland Empire Costco!!

Times, they are a-changin’.

We had a terrific week, spending a lot of time together in the kitchen and then enjoying many family-style, home-cooked meals by the fire.

On the last night we had to figure out what to make with what we had left in the fridge. With an eclectic assortment of veggies still in the bins, the obvious answer was soup.

We had also brought with us a pumpkin that had been sitting by our front door since mid-October.  It wasn’t squishy yet, so I was pretty sure it would still be edible.

So Saturday afternoon we decided to roast the pumpkin and then use it to make a soup with the leftover veggies. It worked out perfectly, making a hearty vegetable soup with a thick, rich base.

My friend Michelle and I made this up as we went along, and didn’t actually measure anything — so the numbers I’m listing in the recipe below are definitely approximations. That’s okay, though, there’s no need to be exact. Soups should change depending on what you’ve got on hand!

Want to change it up even more? Toss in any kind of whole grains or whole grain pasta, beans, or a protein such as turkey or tofu. You could even throw in some peanuts or cashews, which will soften nicely as they cook.

Although we still had tortilla chips nearby, it was January 1st, so they were off-limits (rule #3!).  Instead, we topped the soup with freshly-toasted seeds from the same pumpkin. They added a perfect, guilt-free crunch!

We decided to roast the pumpkin and then use it to make a soup with the leftover veggies. It worked out perfectly, making a hearty vegetable soup with a thick, rich base. 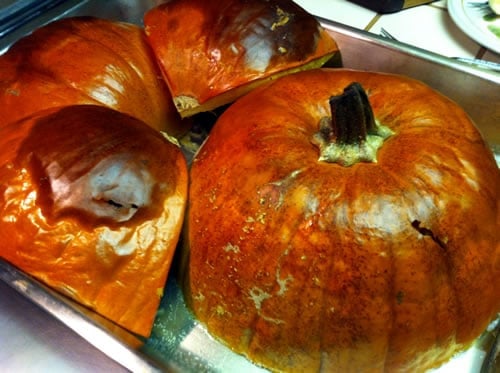 We used a “carving” pumpkin — the same kind you get at the grocery store for making jack o’lanterns.  For soup or bread, that’ll be just fine.  However, Laura (@Bwlrchik) recommends using the smaller “sugar” pumpkins for cooking, and Joel (@CptCrnch) recommends using “long-neck” pumpkins for pie-making.  Either way, a food processor or immersion blender will be tremendously helpful. (You can use a regular blender, but it’ll be a hassle!)

Preheat your oven to 450ºF. Rinse your pumpkin thoroughly. Cut it in half — it won’t really matter if you go through the middle or from top-to-bottom (we went through the middle and it worked great).  A bread knife works well, so you can “saw” through without slipping. Scoop all the seeds and soft stringy center section into a bowl with a spoon, and set aside.

Place the pumpkin halves cut-side-down in a large baking pan, and add about 1/2″ of water to keep it from drying out.  Bake, uncovered, at 450ºF for 45-60 minutes, until the skin can be pierced easily with a fork.

While it’s baking, prepare the seeds. Separate them by hand from the stringy orange bits, and place in another bowl. You won’t be able get all the orange clumps out, but that’s okay. Do the best you can for this step. Next, fill the bowl of seeds with water and rub the seeds between your fingers — the rest of the orange bits will slide off.  Rinse a couple of times and you should be left with clean seeds. Scoop them onto a towel and blot dry.

Lightly grease a shallow baking pan or cookie sheet (using a pan with a lip helps keep the seeds from sliding off).  Spread the seeds on the sheet in a single layer, and then sprinkle a little bit of sea salt on them.

Once the pumpkin is done roasting, turn the oven down to 300ºF.  Give it a few minutes to cool down, and then place the seeds in the oven on the middle rack. After about 10 minutes give them a quick stir. Toast another 10 minutes, and check on them again. When they just start to brown, they’re done!

Once the pumpkin has cooled, scrape the stringy flesh into a bowl. Purée with an immersion blender, food processor, or a regular blender, until smooth. For soup, you do not need to strain it.  However, if you’d like to use the pumpkin purée for baking, drain by scooping into a fine-mesh colander and allowing to drip for several hours. (Cheesecloth should work well, too).

Pumpkin purée also freezes well, so you can save it up to use in recipes year-round.

763 shares
Why is your January going to rule?
Surviving, no, Thriving at an Italian Restaurant

Hiya – I’ve just made this but I’m confused – what are the spices you refer to? You say “After the broth comes to a boil, …. Add the spices and simmer for at least 10 more minutes…”, but there are no spices listed in the ingredients, just oregano. I’m guessing something must be missing because I’m sure it’s going to be very bland with just oregano added.

This definitely looks delicious and I love soups!

I made the soup as listed with organic Imagine vegetable broth but also added 1 cup diced sweet potato, 1 cup lima beans, 1 cup of zucchini and 1 cup of yellow squash, more spinach, thyme, and fresh chopped rosemary. I used organic Farmers Market pumpkin puree with no additives that comes in a box. It was delicious and very flavorful. Next time I may try will using fresh roasted pumpkin and maybe cinnamon.
Thanks for the recipe.

I appreciate all your effort but I hated the soup recipe found it terribly bland.It has great visual appeal but lacks taste.

Hi Sophie. Sorry you didn’t like the soup! Did you add enough salt? I was specifically vague about the amount of salt, since people’s tastes vary widely – but salt does bring out flavor, so it may simply be that you didn’t add enough. Hope that helps!

I used only water to add to the pumpkin puree and I have to say that the soup came out rather bland. So a broth would be better, unless one knows how to be creative with spices and use some in addition to the oregano. Braggs and Srirach saved the day, though! Overall, it is a good vegetable soup recipe. Thank you for sharing it.

Made the Pumpkin Vegetable Soup yesterday paired it with a spinach salad that included chickpeas. The soup was absolutely delcious!!! Leftovers for tonight!

This was a great recipe; thanks for posting. I mixed it up a bit by dropping a couple of veggies we didn’t have on hand (broccoli, mushroom, tomato) and adding swiss chard (stems & leaves both), a small eggplant, and garbanzo beans. And then added 1t cumin, 1/2t cinnamon, and about 3T curry powder. Your recipe is a fantastic canvas for experimentation! Great for these chilly LA winter days. 😉

Thanks Jennifer! Glad you changed it up and it turned out well. Adding the other spices sound like great choices, too. The thing I love about this recipe (and most soup recipes, really) is that they’re so flexible. Just use what you’ve got on hand, and go from there!

I’ve been making pumpkin-ish / winter squash recipes for the past month. Wanted to let you know the flesh of ‘Sugar Pie’ pumpkins aren’t watery or fibrous (and aren’t really sweet either, despite their name!) making it MUCH easier to cook soup, pie, muffins, cookies, quick breads, ice cream, etc.

Thanks, Cynthe! Next year, I’ll definitely try the sugar pumpkins and kabocha instead! I do like the fact that we can cook our jack o’lantern pumpkin instead of throwing it out, though. I love decorative and edible foods! 🙂

That was some seriously good soup! I really liked how the pumpkin provided a nice thick/smooth texture to the soup without overwhelming the whole thing with a “pumpkiny” flavor.

And the chopping wasn’t tedious at all, especially since I took several cheese-and-cracker breaks 🙂

You’re a trooper! (And now, I think I’m going to reheat the rest of the soup leftovers…)

I can’t wait to try this, Andrew! I’m bookmarking it and putting it on my menu for next week. 😀 Time to clean out the freezer of pumpkin puree and turkey broth! lol

Nice! Except for all the tedious chopping, it’s really quite an easy recipe. (Good opportunity to practice your knife skills, I suppose…)

Let us know how it turns out!

I like recipes that give me an opportunity to practice my knife skills. 😀 I will definitely let you know how it turns out!

Andrew, the soup was wonderful! I would definitely make it again. It was worth all that work chopping!