Chili wasn’t the first thing that came to mind when Andrew asked me to participate in October Unprocessed. But as I pondered my thrillingly large pile of red and yellow heirloom tomatoes, jalapeños, poblanos, bell peppers, garlic and cilantro, all from my upstate New York garden, the idea of a homegrown chili was born. 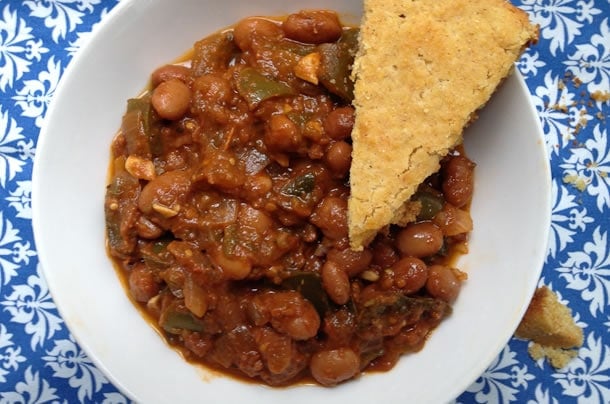 When the mailman surprised me with my latest Rancho Gordo order the very same day, the chili decision was made for me (or at least it felt that way). The maroon and ivory speckled Good Mother Stallard beans were simply calling out.

I must confess, this is the first time I’ve made chili without opening a single can. I usually reach for canned tomatoes, tomato paste – and (gasp!) canned beans if I’m in a major hurry. I can’t tell you how good it feels, and tastes, to make an utterly unprocessed version. If I’d thought of it, I would have also added a foraged ingredient: epazote. The stuff grows all over the place on the sidewalks of Brooklyn – but then again, you never know if a dog has peed on it!

It was a bit hard to use my über-ripe heirloom tomatoes for chili instead of a salad, but I have to say, they gave this chili a lightness and sweetness that really set it apart from run-of-the-mill chili. And of course, using dried heirloom beans rather than canned also made for a more flavorful chili that canned beans could never begin to match. While I used Good Mother Stallard beans, Rio Zape beans would also be excellent choices, as would regular old pintos.

When using fresh tomatoes in a chili, it’s important to keep the spicing subtle. I usually go for deep, dark intense chilis that call for toasted ancho chiles, chocolate, beer, coffee, etc. But here, I held back, adding only some mild New Mexico chile powder, cumin and Mexican oregano. That allowed the tomato and bean flavors to really shine.

So if you live in a part of the country where you can still get good fresh tomatoes in early October, get some and make this chili while the gettin’s good.

If you use homegrown or fresh ingredients in this chili there is no way you could go wrong!

By day, Cathy Elton is a busy advertising copywriter. By night (and weekend), she is an even busier food blogger. What Would Cathy Eat? focuses exclusively on heart-healthy vegetarian recipes. Cathy found her way to heart-healthy eating the hard way, after having a severely blocked artery at the tender age of 44.  Her goal is to help people eat well while still enjoying adventurous and satisfying food.  She is proving that heart-healthy doesn’t have to mean boring.

Trying this tonight…not vegetarian by choice, but sometimes the budget means meatless meals…and I never have canned beans on hand, just dry ones…so finding this recipe is fantastic!!

This was really great!! I had bought some tomatoes with the idea that I’d make a really fresh chili. This was exactly perfect! I did not have any jalepeno peppers or the other kind, but otherwise I followed every ingredient, only change was using 1/4 of the amt of chili powder as we’re not huge fans of very spicy. I did choose to use 2tbsp of real maple syrup and it was the perfect addition. Best veggie chili I’ve ever made.

This sounds beautiful. I use to eat veggie chili as a child. I haven’t had it in years though since I think the canned chili isn’t as nice, so it will be exciting to bring back some good old tasty memories!

Roxana, do you have a blender? That could work for the tomatoes in lieu of a food processor.