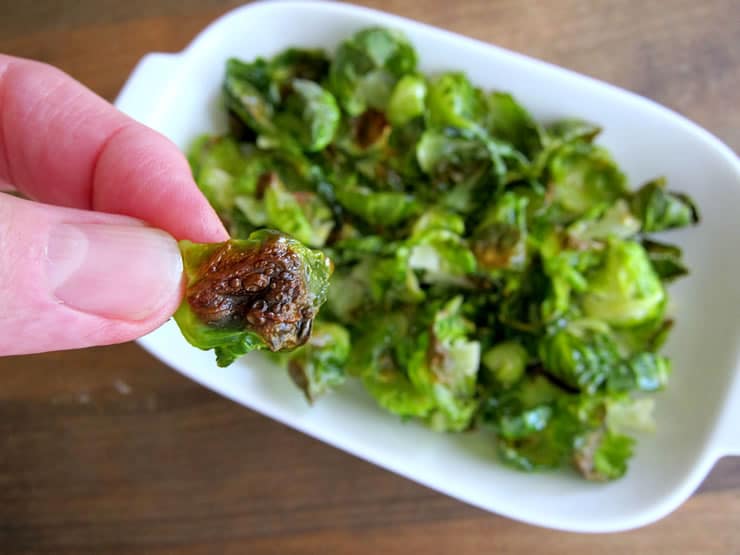 We’ve been chipifying everything from the produce department since that first brave soul decided to see what roasting would do to kale leaves a decade or so ago.

The kale chip has been joined, over time, by the carrot chip, parsnip chip, zucchini chip, butternut chip, beet chip, turnip chip and anything else creative home cooks could get their hands on.

Whether in home or commercial kitchens, roasting and toasting thin vegetables to crispy perfection is a certifiable thing.

Last year for October Unprocessed, I showed you how to make baby bok choy chips. If you haven’t tried that yet, I encourage you to break free of your kale chip obsession and give bok choy a whirl.

And if you’re ready to move on to the next chip today, let’s make Brussels sprout chips. 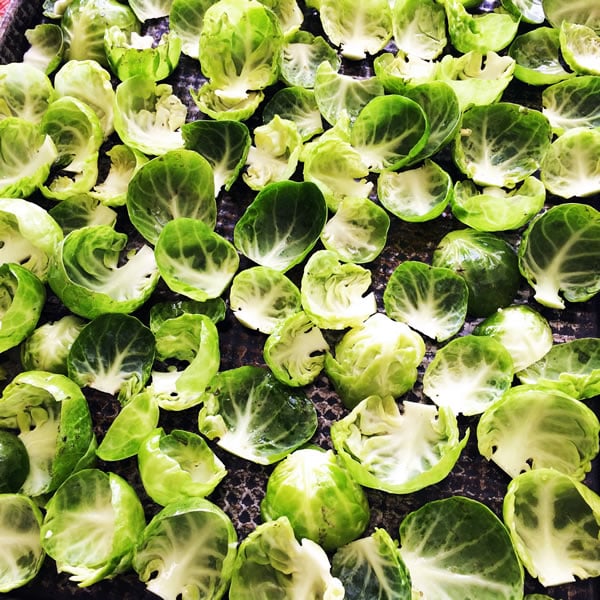 Yeah, America’s most hated vegetable — the one people despise before they even try it — is actually GREAT when you chipify it.

Sure, this vegetable villain can be bitter or sulfurous when cooked too long, but it’s a nutritional powerhouse, which trumps its stinky reputation. Cruciferous Brussels sprouts support the body’s detox, antioxidant and anti-inflammatory systems — three systems closely associated with cancer prevention.

Pros: Nutrient-dense, high-fiber, low-calorie, gluten-free, Paleo, vegan, very low on the Glycemic Index, no saturated fat or cholesterol. And did I mention delicious?

Con: Bad word-of-mouth. You’ll have to convince the sprout haters to try them.

Let’s see if we can turn around Brussels sprouts’ image using this one chip-making technique, without using a fancy PR firm to do it.

(And if you are already a B.S. fan or want another way to use them, also try this magnificent Brussels Sprouts with Bacon, Parmesan and Dates, which will make your eyes roll back in your head when you taste it.) 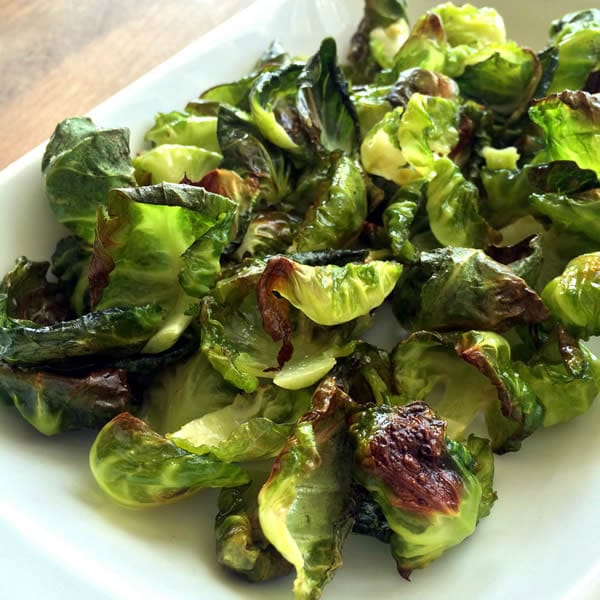 Dorothy Reinhold is the publisher, food writer, photographer and recipe developer at Shockingly Delicious, where she posts terrific, tried-and-true, scrumptious, “scary good” recipes with big flavors. She has been named one of the Top 50 Mom Food Bloggers by Mom.me, a Top 100 Food Blog by Babble.com, and PBS’s NextAvenue declared her one of the 25 best food blogs for baby boomers. She’s been featured in the Los Angeles Times, Sunset Magazine, Taste of Home magazine, on Yahoo Shine and has written for Huffington Post, America Online, Foothills Magazine, and has had a 20-plus-year food column in Southern California newspapers. You can connect with her on Facebook, Instagram, and Pinterest.

How would you store these? And would you recommend a shelf life?

Alexandra, we always eat them right away, so I don’t have experience storing them or with a shelf life. My gut says you should plan to eat them, not store them. Hope you try them!

What an original recipe with Brussel sprouts. Looks delish!

This is definitely the recipe that can turn their bad PR image around – haha! Actually, I adore Brussels sprouts, and roasting is one of my very favorite ways to prepare them! This incredibly simple recipe is such a great alternative to less-healthy snacks like potato chips. Such a terrific idea!

Thanks Shelley! So much of life is about image and PR, isn’t it?

Awesome idea, I could eat the tray of them!

Thanks Tara. You could, and I DID!

Jusine, I completely agree with you. They ARE better!