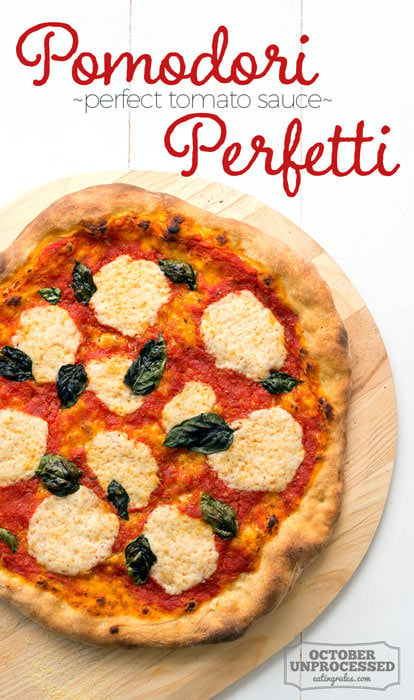 Growing up on the East Coast, pizza is a way of life. Those broad, New York style slices were a quick lunch, easy dinner, and, of course, a breakfast of champions. Eating a cold slice while waiting for my other slice to heat up in the toaster oven was a more common occurrence than I’d like to admit.

At the time you could even make an argument that pizza was a perfect food, since it hit just about every part of the food pyramid in one slice. The crust was a grain, tomato sauce, a veggie, pepperoni covered the meat/protein, cheese was your dairy, and if you went Hawaiian, you even had some fruit! Perfection, right? Unfortunately the meats were usually highly processed pepperoni, ham, or sausage, and your local pizzeria was definitely not making their own fresh mozzarella. So the cheeses and meats that were piled high on those NY style pies were processed nightmares.

You gotta give it up to New York and their style of pizza though. Not only is it truly iconic, but it’s a perfect slice of America if you think about it. We love taking things and making them bigger, louder, and, well, kind of more obnoxious. We were also on the leading edge of processed food innovators beginning during WWI, and powering through the 50s with processed gems like TV dinners and Cheez Whiz. So, of course, we took what was a masterpiece in simplicity, pizza, and made it into a topping heavy monstrosity with cheese oozing out of the crust. And hey, I’m not saying I didn’t eat (and enjoy) a stuffed-crust pepperoni pizza in the day, but it is a far cry from pizza’s roots in Naples, Italy.

When I began my research on true Neapolitan pizza for my new book, Sexy’s Best, Vol. 1: Seriously Legit Vegan Neapolitan Pizza, I was delighted with it’s simplicity. As with most truly Italian food, the focus is on taking a few ingredients and making them shine. Simply prepared vegetables are the cornerstone of true Italian cooking. Locally made cheeses, a small pasta dish, a salad, and a small portion of meat or fish is a typical Italian meal. Everything fresh and clean. Nothing processed.

Those ideals crossover to their pizza as well. The dough of a true Neapolitan pizza only consists of flour, water, yeast, and salt, in very specific amounts. So specific, in fact, that the Associazione Verace Pizza Napoletana was created in 1984. It is a nonprofit organization, founded in Naples, whose mission is to “promote and protect true Neapolitan pizza.” The organization gives its stamp of approval, or Vera Pizza Napoletana (V.P.N.), “True Neapolitan Pizza,” to those pizzerias that follow a strict set of guidelines regarding ingredients, equipment, and technique, thus preserving the quality and consistency of Neapolitan pizza around the globe.

Flavor in the crust is produced naturally by slow fermentation of the dough over several days. The sauce is simply whole peeled, canned San Marzano tomatoes with garlic, basil, and salt. Fresh buffalo mozzarella, believe it or not, is optional.

There is a bit of a catch when it comes to the tomatoes however. Not in their amount of processing, which is minimal, but it’s the designation of “San Marzano” that is tricky and confusing at best. To get the sweeter, less-acidic San Marzanos that are grown in the volcanic ash-rich soil below Mount Vesuvius, and required for the V.P.N. stamp, you must look for the Denominazione d’Origine Protetta (“Protected Designation of Origin”) stamp, otherwise known as D.O.P.

Not every tomato that says “San Marzano” on the label actually qualifies as true D.O.P. tomatoes. Some are grown in America using San Marzano seeds, and are often labeled as “San Marzano style.” You have to look for a little red emblem on the label for the D.O.P. designation to know that they are the real deal. These might not be too easy to find, depending where you are. And if you were to find them in a store or online, they would be on the pricier side. 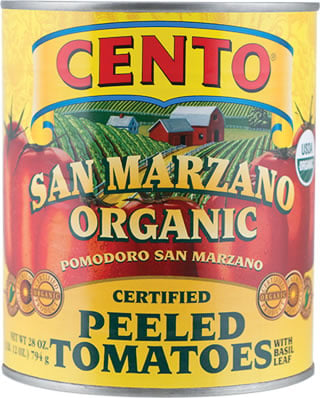 Then there is the Cento brand of San Marzano tomatoes, which is fairly easy to find in grocery stores or on Amazon. Cento San Marzanos used to carry the D.O.P. stamp of approval. The company says that due to what they determined to be the “unreasonable” nature of some new label requirements, they decided to remove the D.O.P. seals from their label, but claim that they remain certified San Marzano tomatoes that are grown in the proper regions of Italy. This is, of course, heavily debated on forums and blog posts, and we may never know the truth. But these are the tomatoes that I use, and they make a flavorful sauce, packed with tomato goodness. If you want to be absolutely sure you’re getting the real deal, seek out that D.O.P. stamp, but in my opinion, the Cento brand is completely acceptable, and delicious.

Two other important steps that make this sauce extra special are straining excess water from the tomatoes, which concentrates their flavor, and removing as many seeds from the tomatoes as possible, because they would impart a bitterness to the sauce when blended. 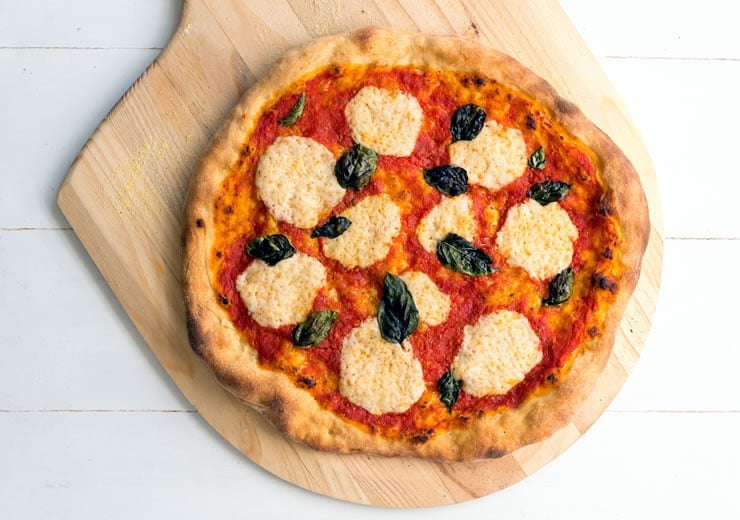 Pomodoro Perfetti, or Perfect Tomato Sauce, is a recipe that allows the tomato flavor to shine with its simplicity.

The sauce will keep in the fridge for a week. Allow to come to room temperature before making your pizzas.

Brian L. Patton (a.k.a. The Sexy Vegan) came to internet semi-fame in the early days of YouTube with his funny, irreverent, off-beat vegan cooking videos. He has since penned cookbooks, contributed to and been featured on major media outlets such as nytimes.com and huffingtonpost.com, and is a regular recipe columnist for VegNews Magazine.

I am so loving this recipe and explanation. So the tomato sauce is not cooked until the pizza bakes? What do you like to use for vegan mozzarella?

Thanks, Dana! That’s right, the pizza is cooked at a high temperature, under the broiler actually, so everything cooks in about 4 – 5 minutes, including the sauce. In my book, is my recipe for an easy homemade cashew based “buffalo”-style mozzarella. For this pizza the best store bought cheese would be the Fresh Mozz from miyokoskitchen.com, it’s similar to the one in the book. For more standard “NY/American” style pizzas (which bake longer) I like the Follow Your Heart’s mozzarella shreds.

Simple is indeed the best. I would love a recipe for pizza crust made from whole wheat flour:)

Hi Jean! Here are two you can try:

I like to make things ahead of time in large batches for me to use at later date so If made and not used right away; can this be put in freezer safe containers and frozen?