Meghan Joyce likes to eat. She also likes the world. She shares her vegan (mis)adventures in cooking, restaurant reviews, and the occasional vegan “newsy” bit at Meghan The Veghan. You can also find her on Twitter. 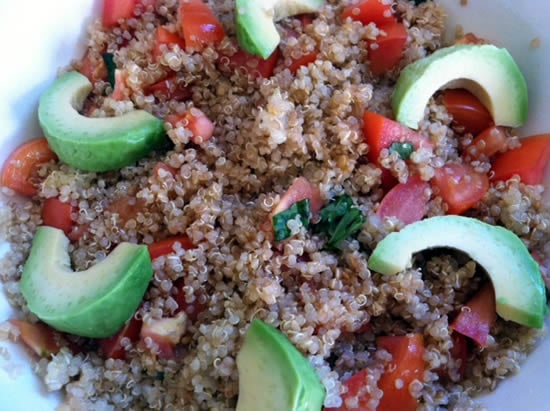 I became a vegan seven months ago, mostly for environmental and economic reasons, but in part because I love a challenge. And so far, eating only unprocessed foods for the month of October has been more of a challenge than I expected when I signed the pledge.

There were some obvious first steps to take. I cut out my vegan butter substitute, Earth Balance, and hid my Daiya fake cheese in the back of the fridge (unlike real cheese, that stuff lasts forever). I replaced my Almond Breeze brand almond milk with organic unsweetened Eden Soy milk, whose only ingredients are reverse osmosis purified water and organic soybeans. (No, I wouldn’t know how to go about osmosifying water in my own kitchen, let alone in reverse, but in my opinion water is water.)

But there was still one processed food I couldn’t figure out how to part with: CLIF bars. I’m a graduate student at a university with very few on-campus vegan options. I always pack a lunch, but sometimes I get hungry at odd hours and I’ve already eaten my lunch, and it’s not like I can just pick up a vegan snack at one of the campus convenience chains.

If I get too hungry, I get cranky. Like scary cranky. So I always carry around an emergency CLIF bar to avoid a situation in which, in a hunger-induced fit, I either lash out at one of my colleagues (best case scenario) or just lie down in the middle of the bike lane and slowly starve to death (needless to say, worst case scenario).

But after discovering that my favorite snack bars are made of lots of unprocessed ingredients, I stashed my Costco-sized box of CLIF bars in a back corner of the pantry for the month of October. I knew I had to replace them with something. I tried making my own unprocessed bars out of rolled oats and brown sugar, and even though they tasted delicious, they fell apart when I tried to transport them to campus.

So I tried Lara bars. They’re $1.79 a piece at my local grocery store and I’m poor, so I only bought one bar to start. I went with a “pecan pie” bar, whose only ingredients were almonds and pecans. It tasted great, so a bought a few more. But as I said, they’re expensive. A slightly cheaper and equally easy alternative has been just carrying raw nuts, rather than bars made of raw nuts, as an emergency snack.

But even with the emergency snack bar problem solved, I’ve had to make two exceptions to the unprocessed rule. The first exception: Eating out. When I go out to eat at regular-people restaurants, there are usually only a few vegan options for me. It’s not like I’m going to order fake meat (which is obviously processed) during this month, but I’m not going to be a stickler about the ingredients in the dressing on the one vegan salad on the menu.

The second exception: food friends make for me. I had a potluck dinner party at my new house last weekend, and my omnivorous friends got really creative with the vegan dishes they made. During any other month, I am already that annoying vegan friend who doesn’t want to eat their regular food. So I wasn’t about to refuse to eat the vegan cookies they had made special for me with Earth Balance instead of butter.

With those exceptions, it’s been a really successful unprocessed month so far. It’s given me the chance to get creative rather than relying on my go-to easy snacks. And I feel great about supporting unprocessed food companies like Ezekiel bread (but keep it in the freezer or it will grow mold in like two days because it has no preservatives!).

Some of the recipes I’ve created this month will definitely become staples in my diet even after I reintroduce some processed foods. I’ll share one of my favorites (and one of the easiest to make) with you now.

Do you have a favorite recipe for an on-the-go bar? Share in the comments!

Quinoa with Tomatoes and Basil

This healthy dish is sure to be a favorite as it is super simple to make and has amazing flavor rushing throughout the dish.

Here are step-by-step directions for How to Make Fluffy Quinoa.

WONDERFUL dairy not too far away makes one realize why it USED TO BE CALLED sweet butter!! The whole milk is to die for, almost a meal in itself!

Why aren’t you eating raw cashews when you’re hungry? I’d bet money you aren’t getting enough healthy oils in your diet. Try Tropical Traditions coconut oil. Find their web site and read all about their ‘back to the natives’ old fashioned processing. I’ll always go with back to Grammy’s food before I’d use something like earth Balance. Nice name tho. Again, avoiding organic butter from grass fed cows???
Why do you think God gave us those nice moo cows and yak (yaks?) and goats who don’t kill us when we take their milk?? I mean! If bears gave milk I’d be avoiding it too!! I have a

You would have to make a few adjustments to veganize them… but these are great! http://www.melecotte.com/2011/09/quinoa_nut_bar/

I love Katie’s homemade Larabars from Kitcehn Stewardship. If you have a food processor, it’s a much cheaper way to get your larabar fix. (I tend to make balls instead of bars though – they seem to fall apart less.)

These bars are yummy (and easily transportable!). My version cuts down on the sugar. They’re still sweet, though: http://www.eatingwell.com/recipes/almond_power_bar.html

I use 1/4 c. agave or honey and 1/2 c. almond butter, and omit the sugar. Be careful to just warm this mixture — if it cooks too much, it’ll be too thick to mix into the dry ingredients. I use whatever dried fruit I have on hand — recently that’s been cranberries, apricots and sour cherries. Yum!

Throwing fruit into the mix is a great idea! I’ve got some golden raisins that might work.

Homemade Larabars are SO EASY and transport well. Look at the ingredients in whatever bar you want to make and remember that ingredients are listed in order of amount (largest amount first). With the limited ingredients you really can’t go wrong. Toss everything in a food processor and tweek it until you love it. Go for it. Honestly, you will find that it is easy.

If your Larabar doesn’t hold together well, throw it in a reusable container and eat it with a spoon. Nothing wrong with that!

This looks yummy. Going to try it this weekend.

I’ve had off and on success with oat bars but none good enough to post yet, that said – now that I think about it – my Bounty Bites (http://84thand3rd.com/2011/04/23/bounty-bites/) which I make as truffles could be transformed into bars really easily. I’d perhaps add a bit more oats, form the mixture into a long log, cut into batons and flatten a bit when coating in the coconut. Let me know if you try it!

I have found a bunch of larabar recipes, just google it up- will save you a bunch of cash! And check out hungryhungryhippie.com, she packs a crazy amount of to go vegan foods for her 12hour shifts nursing and has great recipes for granola and how to pack snacks that are easy.

Meghan
Reply to  Tt in nyc

Fantastic! Thanks – this will help a lot since my bars fell apart…

thank you for posting this one! I just bought quinoa for the first time, and I still have LOTS of basil in my garden for this dish!! this is one of my favorite flavor combos. can’t wait to try this one!