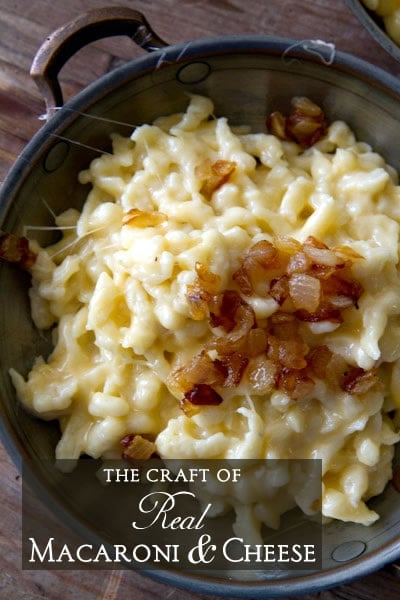 If there’s one processed food that holds the record for the most appearances at American dinner tables, it’s probably macaroni and cheese. I grew up with that very same blue box most of you did, with its starchy, duck-orange “cheese” powder and strangely comforting chemical flavor. If ever there was a flavor that I’ve grown to associate with the color orange, it’s that little Kraft flavor packet.

As I got older, I indulged in what I thought was a much more gourmet version: the yellow box, which contained not an envelope of dried powder, but rather a squishy pouch of nuclear-orange goo. I very nearly lived on this sludge for years, completely enamored with its over-the-top saltiness and the fact that I didn’t need to add a single thing to the sauce to make my dinner. For me, this weird pouch of gluey “cheese” was macaroni at its best.

At some point someone taught me how to doctor my macaroni packets, adding hot dogs, potato chips, and even real spices to the goo. Woo-wee! I was living the life of a true gourmet!

Then at 23 years old, I had my cholesterol tested. I’m a relatively small person – only 106 pounds on a heavy day – and pretty active. You can imagine my surprise when my doctor, who didn’t even want to test my cholesterol until I pushed for it as part of my physical, alerted me to the fact that my cholesterol was nearly 300. My doctor was appalled. “What the hell are you eating?” he demanded.

This day shall go down in history as the point in life when I first recognized that there was a difference between processed food and real food. I grew up on the worst of diets – everything I was fed as a child came out of a box, a can, or the freezer. My mom, being a single parent with two kids and a crap job, did the best she could to get food on the table; many nights dinner consisted of concentrated soup or instant ramen, a can of generic green beans, and boxed mac and cheese. I had no idea that I was eating like crap, because in the 70s and 80s, everyone ate that way. It was just what I knew to be normal.

Fast-forward 15 years and I’ve got a very different philosophy on food. Nearly everything I eat now is in its whole-foods form, ideally organic, and most likely cooked from scratch by me or someone very close to me. That includes soups, stews, vegetables, and countless other things I used to eat out of a box, bag, or can. In fact, I can barely stomach processed food these days – the level of salt and sugar completely overwhelms my palate, making it tough to get down more than a few bites before I feel bloated and gross.

Perhaps the most profound change, though, was how my perspective on macaroni and cheese evolved. I went from being a young adult that subsisted almost entirely on dried pasta and powdered cheese, to being the author of a cookbook that creates inspired mac and cheese dishes out of fresh ingredients and small production, artisan cheeses. That’s quite a jump, isn’t it? Now that I’ve been exposed to the world of real cheese, there’s no turning back.

A lot of people believe that creating macaroni and cheese from scratch is difficult, when in reality it takes very little effort and yields results that are a thousand times tastier than anything you’ll get out of a box. If you know how to heat milk and shred cheese, then you’ve got the skills necessary to create a supremely creamy stovetop mac and cheese dish from scratch. The best part is you don’t even need a recipe. Here, I’ll show you the basic ratio:

That’s it. Really. Oh, and some pasta, of course.

Here’s a base recipe for creating a macaroni dish that is both gorgeously decadent and way healthier for you than boxed versions. Down with the powder packet and squishy pouch!

This dish is so easy to make, yet tastes like you've been slaving away for hours over the stove. You can be creative in your choice of cheese, combining two, three, or even four different cheeses, as long as they're capable of melting into a sauce. You can also add a handful of cooked vegetables, if you like - in fact, this is a GREAT use for leftover veggies! A few tips: be sure to remove the sauce from the heat before adding the cheese, as heating cheese too quickly will cause it to separate. Also, hold back on the salt until after you've added the cheese to the sauce - the variety of cheeses you use will greatly affect how much seasoning you'll need to add.
Course Entree
Cuisine American
Prep Time 10 minutes
Cook Time 30 minutes
Total Time 40 minutes
Yield 8 servings
Calories 304 kcal
Author Stephanie Stiavetti

Stephanie Stiavetti has a superpower, and it’s teaching people how to cook like a boss. After spending the past decade putting herself through culinary school and working in the food industry, she started Fearless Fresh to help you become the badass home chef you’re meant to be. Check out her cooking cheat sheets, which guide you through every step of the cooking process with creativity and ease. You can also find Steph on Instagram, Facebook, and Pinterest.

Well, ok, but isn’t that pasta still a processed food? Is it really better than the box? I don’t believe the pasta is good for anyone either.

Pasta is about as processed as good bread – that is, grain is ground into flour, mixed with liquid, baked or dried . . . . You can get really good, whole-ingredients, preservative-free pasta in most grocery stores, now.
If you’re off grains, of course, you’d need to use something else . . . grilled zucchini, baked potato? Me, I still think grains are a reasonable thing to eat on a fairly regular basis. I didn’t learn to like mac-&-cheese until well into adulthood – my gradeschool served it (I don’t know what they used, but I recall it looking JUST LIKE the blue box), and Dad, a whole-foods nut before anybody else bothered, informed me that it was a) junk, and b) very nasty-tasting. I believed him. 40 years later, a workmate brought some for a potluck. Our rains should start early next month, and I’m saving this recipe!

I used to think that my mom’s macaroni and cheese was the best in the world so I learned to make that and served it to my own family. Until. My son learned to cook merely by watching me- bad mom, I guess, but I didn’t teach him. He started making “Ba-ma’s” macaroni and cheese for us and now he’s the one who makes it when we go to Ba-ma’s. Angels sing when the dish comes to the table. It’s that glorious. Nowadays we often make it with Tinkyada brown rice elbows- or the ones that look like cork screw elbows. Somehow, the dish remains amazing. Our mac and cheese is more of the custard type than creamy. My son is twenty now and I call him for a refresher whenever I get ready to make mac and cheese- it’s too good to make too often, lest my daughter and… Read more »

I like to steam butternut or acorn squash, smash it, and then stir it into the sauce. YUM!

I’ve seen too many mac & cheese recipes that are from scratch but don’t follow the basic principle of short pasta with a mornay sauce. Thank you for getting it correct!

Sounds delicious! Any ideas on how to make the sauce in a single pot to minimize clean-up?

Simply don’t warm-up the milk ahead of time, pour the milk straight in the roux, little by little. It’s how I do it at home. Voila, one pot only.

Even better, if you want to save on washing even more, is to use the same pot you cooked the pasta in, and add the pasta back in that same pot after the sauce is done.

Perfect timing. I think I am going to be a convert soon! Can’t wait to try it —

I always add carrots to mine — and I chop them up and put them in the boiling water with the macaroni. This works well with cauliflower and broccoli also.

Looks like German Käsespätzle.
Gluten-free recipe – http://www.kuechengoetter.de/rezepte/Auflauf/Kaesespaetzle-178037.html
(Google will translate for you)

I’m so excited to try this! I used to be a fan of the blue box many years ago, but I don’t know if a Zombie Apocalypse could get me to touch it now. Thanks for the great recipe!

I Love making and eating macaroni & cheese from scratch.

After the pot, i pour it in a baking dish. put some buttered breadcrumbs mixed with chili powder on top. stick it in the oven for 10 minutes at 350. Yum! Serve it with a big side salad. Heaven.