Daniel Koontz is the author of Casual Kitchen, a blog helping readers cook more, think more, and spend less. Last year he gave us his thoughts on The 80/20 Rule, and today he shares another important — and empowering — idea.  Oh yeah, and there’s something about zombies, too. 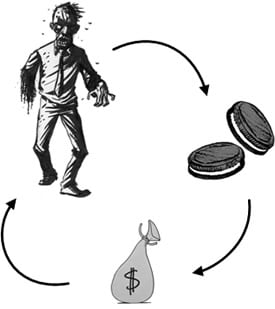 There’s an entire stack of costs involved in getting packaged and processed foods into the hands of consumers. Take Oreo cookies for example — uh, exactly the kind of food we’re trying to avoid here at October Unprocessed. Baked into every box of Oreos are ingredient costs, processing costs, packaging and transport costs, advertising and marketing costs, and so on.

All else equal, if a company wants to make money on what it sells, then the retail cost of that box of Oreos must equal the sum of all the various costs in that cost stack, plus a profit margin.

Okay. With that as a starting point, let me ask readers here at Eating Rules a question: What is, by far, the single biggest cost in the cost stack of almost all processed foods?

I’ll give you a big hint: It’s advertising and marketing.

In fact, when selling processed foods, almost all major food companies use a transparently simple, three-step business model based almost totally on advertising. Here’s how it goes:

2) Charge those consumers a premium price when they shuffle mindlessly and zombie-like to the store to buy food products,

It may be simple, but this business model works well — exceptionally well. Some of the most successful and long-lived companies in modern economic history (Proctor & Gamble, Colgate-Palmolive, General Mills, Kellogg, Pepsi, just to name a few) use this model to earn juicy profit margins across recessions, depressions, booms and busts.

Here’s the thing, though. This advertising-consumption cycle works for one reason and one reason only: Because we as consumers enable it. Sure, the companies make the foods and run the ads — they’re the first part of this equation, obviously. But when we consumers pull our money out and buy these products, we complete the advertising-consumption cycle.

That’s why assuming that consumers are helpless victims under the boot of the food industry is not only inaccurate, it’s deeply condescending. It presumes that we are helpless zombies who can’t resist advertising. Despite the semi-facetious title of this post, most human beings are not zombies. I hope.

(However, if someone behind you in the grocery store moans “braaaiiinnnns” — run. Just in case.)

Here’s the conclusion. Now that we’re totally familiar with the hilariously simplistic, three-step business model above, we consumers know exactly what to do. We know food companies will run lots of ads and spend lots of money on branding, and we know they’ll try to sell processed foods to us at prices high enough to cover those advertising costs — and still earn generous profits. We the consumers end up paying for everything, including the ads, and often end up getting suspect food products in return.

That’s why, as consumers, we must adopt an entirely new philosophy of consumption.

When you see products being advertised, don’t be a zombie and passively ingest the message of the ad. Instead, develop the opposite instinct and avoid those products.

When you see an ad for cookies or branded, boxed cereal on national TV, or hear a processed food jingle played on the radio, think of the enormous cost of running those ads. Think of yourself paying for that ad — which is exactly what you do when you buy that product.

When you see a product or company sponsoring a major sporting event, or buying naming rights for a stadium, think about the enormous cost. You pay for that. A saturation print ad campaign? You pay. Billboards? You pay. Super Bowl ads? Yep, you pay.

Before long, you’ll start to see heavily advertised foods for what they really are: Destroyers of consumer value. You’ll have no problem instinctively avoiding them, and instead you’ll automatically seek out lower-priced, less-processed, and healthier foods instead.

If there’s one idea I’d like you take away from this post, it’s this: Advertising destroys value. Rethink how you react to advertising, and you’ll get far more value for the food you buy.

Although advertisers and marketers are always one step ahead. Read more about Edward Bernays. I would agree that humans can break the cycle of mindless consumption of advertising and products… First step.. understand HOW the advertisers and marketers get you!. It can be a bit more complex and subtle than ad’s in between your favorite sitcom. To understand the psychology behind the ad’s you have to understand your own mind.. Understand why you may be motivated to obey an ad. Advertisers get stealthier and stealthier every moment knowing that consumers “wake up” and they need to move on to something more imbedded into the lives of consumers!. The person sitting next to you at a bar may be a shill being paid to sell a certain drink or even a camera or smart phone. It may LOOK as though they are a normal bar patron but their casual conversation about… Read more »

Dan, to clarify, I see that you are advocating for consumers. Assuming that the target audience for your message is people who are still regularly buying these products, my thought was that the zombie language and some reader comments that mentioned poor food choices might be coming off as elitist instead of motivating. You are offering resources on your blog to make healthy food more accessible, so obviously that is not your intention!

More great comments. Thanks for the thoughts and insights.

One quick reaction to Ella’s comment: Yes, having sympathy is important. But please don’t mistake this post to be unsympathetic in any way. The whole point of my writing it was to advocate for consumers. What I don’t want to see, however, is readers confusing “having sympathy” with “taking action.”

The bottom line is this: the more of us who engage with others on this subject, the fewer people out there will continue to be susceptible to advertising. Again, if you feel strongly about this issue, write about it, talk about it, and share this post!

I totally agree that the money spent on advertising is ridiculous.

I think it’s important to have some sympathy for people who are susceptible to advertisement. Advertising works so well on people and is a solid investment for the companies because it’s based on tons of market research about how our brains respond to tastes and images. So, honestly, we are all kind of hard-wired to be zombies. I might be a part of the whole foods/health food blogging community, but I certainly feel a strong call from the Oreos. Obviously, it’s devious for companies to exploit how our brains work to the detriment of kids and the food insecure.

For the same reason, it’s probably good to limit kids’ exposure to advertisement.

This made me think of the ads I see in food magazines I read. Most of them are for luxury consumer goods like refrigerators and cars, but there are often spice company ads, and lots of them (McCormick, Spice Island, etc). I wonder what might make spices from these big brand companies better or worse, health and ecology-wise, than spices from Penzey’s, or bought in bulk at Whole Foods? Makes me wonder what role processing plays in buying herbs and spices…

So true that advertising destroys value. We really must be more aware about what we consume. Is it a mere coincidence that I find that most coupons are for processed foods, junk food, etc? Yet I know so many people that buy this junk just because they have a coupon. Pretty sad if you ask me.

This is really informative. I agree that food industries mustn’t treat their consumers as zombies. When I do referral marketing , I try to think of what’s best for my clients when they visit my store.

I twigged to this when I worked scheduling advertisements for a radio station. I looked at what it cost an advertiser to run a week’s worth of commercials on one small town station and imagined how many other stations were running the same ads. Just radio. So if the product advertised sells for $1.29, how much of that is for ingredients? Not much – the ad cost a lot more than that. You won’t find many name brands in my house, and what you do find aren’t likely to be in my kitchen.

Whenever I laugh over an ad on TV, I ask myself afterwards, “What were they selling?” Half of the time I can’t remember, and it makes me laugh to think of those wasted ad dollars. I’ve seen some ads dozens of times and what they are selling still doesn’t “stick.”