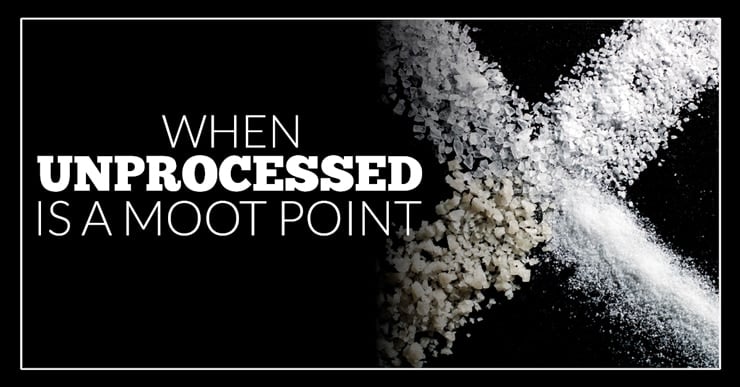 As a dietitian, I over-stand the importance of eating a diet rich in unprocessed or minimally processed foods. Our current food landscape is awash with ultra-processed foods, which deliver plenty of added salt, sugars, and oils but not much in the way of true nutrition.

Alas, “unprocessed” has become co-opted by the food industry as an advertising tactic, especially with salts and sweeteners.

While simultaneously adding more potassium to the diet (predominantly found in whole, plant-based foods) is key for healthy blood pressure, there is no doubt that high intakes of sodium are problematic. Sodium is quite sneaky, by the way, showing up in high amounts in foods that may not taste particularly salty; a Dunkin’ Donuts corn muffin has as much sodium as eight chicken McNuggets.

Meanwhile, the latest figures from the Centers for Disease Control and Prevention (CDC) show that the average adult man in the United States takes in about 335 calories from added sugars every day: that’s about 84 grams, or 21 teaspoons. Women take in 239 calories — about 60 grams, or 15 teaspoons. These figures far exceed the American Heart Association’s and World Health Organization’s added sugar recommendations.

Nevertheless, it still worries me when I see salts and sweeteners marketed as “healthier” or “better choices” simply because they undergo minimal processing.

Let’s take a look at some examples, beginning with sweeteners. 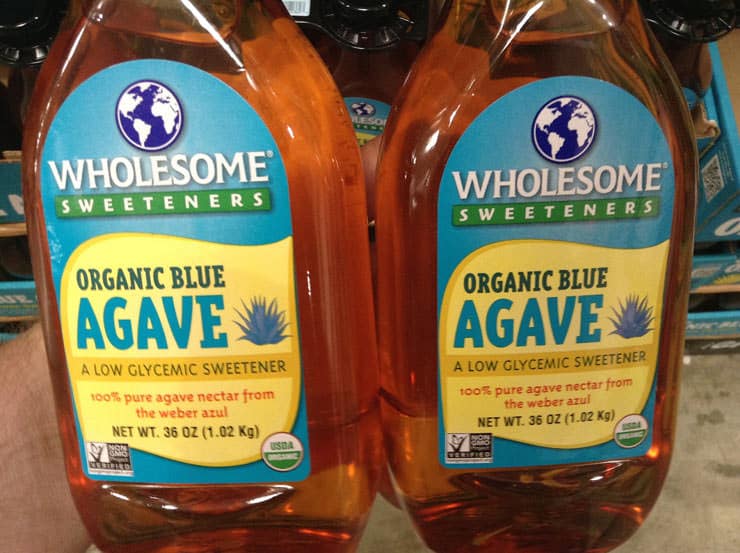 A decade ago, agave nectar was somehow relegated to “health food” status in certain circles because it was considered a minimally processed alternative to table sugar with a lower glycemic index (the higher a food’s glycemic index, the higher it raises blood sugar). However, basing healthfulness strictly on the glycemic index is unwise. If you go by those numbers, then ice cream is a “better” choice than fresh watermelon. Agave ultimately fell out of favor due to its high fructose content. While high fructose intake appears to come with its own set of problems, high intakes of added sugar – regardless of fructose content – are bad news for health.

Maple syrup is, even to this day, considered “better” than table sugar because it is less processed. Some even tout the naturally occurring minerals in maple syrup as a way to showcase its apparent superiority as a sweetener. While its distinct flavor certainly has culinary importance, claims of its nutritional prowess are greatly exaggerated.

Yes, there is magnesium and potassium in maple syrup (two minerals Americans fall short on). But, a tablespoon of maple syrup provides a scant 4 milligrams of magnesium and 42 milligrams of potassium. In other words, it takes 58 teaspoons (232 grams of sugar!) to match the magnesium in a cup of garbanzo beans, and 11 teaspoons to match the potassium in half an avocado. Of course, the maple syrup doesn’t offer any of the heart-healthy fats, vitamin K, vitamin C, or fiber that same half avocado contains.

Then there’s honey. A quick glance around the internet comes up with many largely unsubstantiated health claims about honey: it supposedly “aids in weight loss” (a sweetener that helps with weight loss?), “strengthens the immune system,” and “helps reduce blood pressure.” The presence of “vitamins and minerals” in honey is sometimes mentioned, but a tablespoon (12 grams of sugar) delivers a paltry 1 mg of calcium (.001 percent of a day’s worth) and 0.1 mg of vitamin C (.00 percent of the DV). Meh.

The sweetener du jour is coconut nectar, and its “minimally processed” status and low glycemic index are its main selling points. Oddly, the fact that it contains 17 amino acids is also touted as a plus, which makes very little sense for two reasons. First, only nine amino acids – the building blocks of protein – are essential (meaning we need to get them from food). Second, sweeteners offer very little protein, so coconut nectar’s amino acid content is also minimal. And if there’s one thing Americans don’t have to worry about, it’s their protein intake.

Brown rice syrup is ubiquitous in many supposedly “better-for-you” processed foods — especially protein and granola bars — where it is often listed as the first ingredient. While some proponents point to its “natural” and minimally refined status (as well as the absence of fructose) to explain its alleged superiority over white sugar, it doesn’t offer any nutritional advantages. In fact, since its sweetness is less pronounced than that of other liquid sweeteners, higher amounts of brown rice syrup (hence more grams of sugar and more calories) are necessary for flavor’s sake.

Bottom line: whether you’re talking about honey, agave nectar, maple syrup, coconut nectar, white sugar, or brown sugar, you are talking about 4 grams of sugar – and 16 empty calories – per teaspoon. Increasingly, it is becoming clear that these calories are not just empty, but also harmful.

A similar style of healthwashing happens with salt. The respective grey and pink colorings of Celtic and pink Himalayan salts are often pointed to as proof of their apparent nutritional superiority, since these natural colorings are derived from the naturally occurring minerals in these salts. In the case of Himalayan salt, for example, the pink hue comes from iron oxide.

Many purveyors of pink Himalayan salt boast that it contains 84 essential minerals. Sounds fantastic, right? Well, again, it’s important to keep amounts in mind. The mineral content of any salt, in the recommended amounts (no more than a teaspoon per day), is negligible.

And, by the way: shame on those who claim that pink Himalayan salt is great for “detoxing” the colon due to its unrefined nature (I’m not even going to link to such nonsense).

Americans undoubtedly need to increase their intake of minerals like magnesium, calcium, and potassium. However, we should strive to get them from whole foods, not salts and sweeteners.

159 shares
Massaged Kale & Quinoa Salad
You, Too, Can Homebrew

I’m glad you address this as I have been avoiding sugar for the last 6 months and noticed a lot of sugar-free recipes call for agave or maple syrup. And I couldn’t figure out why that was all that much better than white or brown sugar. Good to know that I should reduce those foods as well. I know the term “unprocessed” is different for everyone, but I’d love if we also addressed oil as a processed food. I see it in so many unprocessed recipes, but I consider it a processed food. It’s a concentrated food, not a whole food. It takes up to 20-40 olives to make a few gulps of olive oil, but few of us would eat that many olives in one sitting. Plus have you ever watched oil being made? I don’t know that I could consider it unprocessed after watching the process. Research tells… Read more »

So helpful and comprehensive — thank you! My family is good about avoiding store bought and processed sweets, but we do enjoy the occasional baked treat. So are all of these options equally bad for you in baking OR is it still better to substitute white sugar with one of these, such as coconut sugar, in baking? Thanks!

Hi Amy – One of the things Andy (deliberately) didn’t address in the post is some of the externalities associated with sugars. I’d argue that while organic (and Fair Trade) sugar isn’t going to make any difference in your body, it will make a difference for the health of the planet and of farmworkers… so that’s something to consider as well.

That actually brings me back full-circle to Andy’s guest post from 2014!
https://eatingrules.com/why-organic-matters/

A great reminder during this unprocessed challenge!

Love the dose of reality. Thank you, Andy.

YES. This is exactly why I’m working so hard to remove the added sugar from my Not Ketchup sauces. Real fruit, with its fiber and nutrients and natural sugar, is sweet enough. Our bodies don’t need more sweet than that!

I agree with you! These sweeteners and salts are basically the same as what’s in our pantry

I absolutely agree with this! Some of those sweeteners and salts are OK in very small amounts but you need to be aware that they are basically the same as white sugar and iodized salt