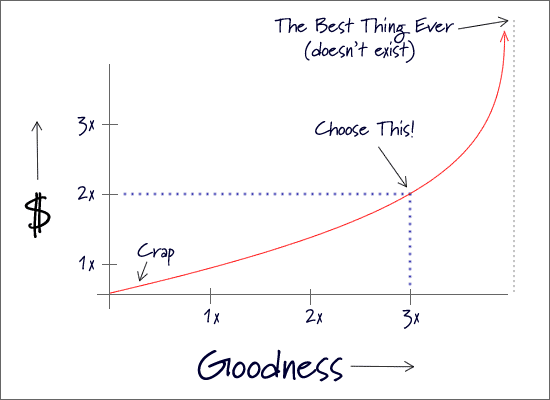 Shortly after I finished college, I worked part-time at a high-end audio store. This was no Best Buy; it was an audiophile’s dream, filled with some of the finest home audio equipment available.

They had two demo rooms, the shelves filled with entry-level and mid-range speakers, CD players, and amplifiers. It was all good gear, but it was nothing compared to what they kept in “The High End Room.” This wondrous space had a separate lock on the glass door.  Glass, of course, so you could peer in and lust after the unobtainable.

Everything in the room was top-of-the-line, from the $40,000 speakers (with huge slabs of granite on the sides) down to the $10,000 speaker cables. Yep, ten large for just the cables from the amplifier to the speakers. (In their defense, these were no ordinary wires. They were about an inch in diameter and had a large box in the middle with all sorts of top-secret electronics, which presumably gave the electrons a Swedish massage as they passed through).

Because we frequently moved speakers around, one of the pins on the cables broke. While it was out for repairs, we switched to the next model down (which sold for a measly $1,200).

When the repaired cables were returned, they tasked me with hooking them back up.  It was a slow day, so they let me listen for awhile, comparing the two cables to see if I could hear a difference.

After enjoying some truly fantastic recordings, I came back to the front of the store. John, one of the salesmen, eagerly asked, “So? What did you think?”

“Her voice was a tiny bit clearer and more realistic.  I think they sounded better, but I’m not sure they sounded nine-thousand-dollars-better.”

But what about for the rest of us?  We have to draw the line somewhere, right? I’ve been pondering this for awhile now, and I’ve come to a few realizations:

First, “Best” is a fallacy. There’s always going to be something better.  There is no such thing as attaining perfection.

Second, the closer you get to the mythical “Best,” the more expensive something becomes.

Third, and most importantly, it’s an exponential relationship. The tiniest of incremental improvements will cost increasingly more and more as you get closer to the top.

The reverse is true, too.  If you start from total junk, it takes very little money to move up by a significant margin.

So it seems the sweet spot is somewhere in the middle — a few steps above “crap,” but a few steps below “perfection.” I think that spot lands at about twice as expensive and three times as good.

How you apply this whole philosophy really depends on how you define “good.”  It can be applied to just about any purchase, but let’s consider it in the context of food (this is a food blog, after all).

Taste is probably the highest priority in defining “good.” Many people stop there.

There are many other criteria to consider:  Healthfulness (more nutritious! organic! whole grain!), environmental impact (locally-sourced! grass-fed!), ethics (fair-trade! family farms! humane treatment of animals and workers!), and so on and so forth.

For example, let’s say I can get a pound of tomatoes at a big grocery store for $2.  They’re not organic, they’ve been trucked halfway across the country, and frankly, they’re pretty darn bland. But what if I go to the farmers’ market, and find a pound of tomatoes that taste delightful (I know this because they gave me a sample), are pesticide-free, are grown locally,  and come from a small family farm. If those tomatoes cost $4/pound, would you buy them? I sure would! Yes, they’re twice as expensive, but according to my values, they’re at least three times as good — maybe more.

This is all relative. Everyone’s starting point will be different, based on budget, expectations, and a personal sense of what something is “worth.” Ultimately, it’s about value: No matter where you start on the curve, once you go beyond twice as expensive, three times as good, you will experience diminishing returns.

So next time you’re at the market (or any store, really), consider this philosophy when looking at the options available to you and the prices beside them.  If your budget allows, try to find something that’s twice as expensive but three times as good. You’ll be glad you did.

Enjoyed this post again! Thank you again for the great reminder

Well observed subject matter of health and cost on food. Your post is well written and simple to understand. Thanks for sharing.

Taste buds have a limit in the quality of the taste that can be distinguished. Hearing has a limit to the quality of sound that can be detected. Eyes have a limit to distinguish colors and limit to distinguish details of what they see. For example, TV screens will hit a limit where eyes can’t distinguish between a maximum number of colors (about 170,000), or number of pixels per inch. At these points, cost is not the limiting factor but the human body. And then you have to consider the health of the particular human… Human ears deteriorate some over time, plus eyes, taste buds, etc.

I just have to say, I love love LOVE your chart! I wanna steal it and hang it on my fridge.