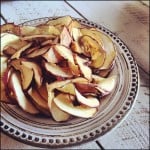 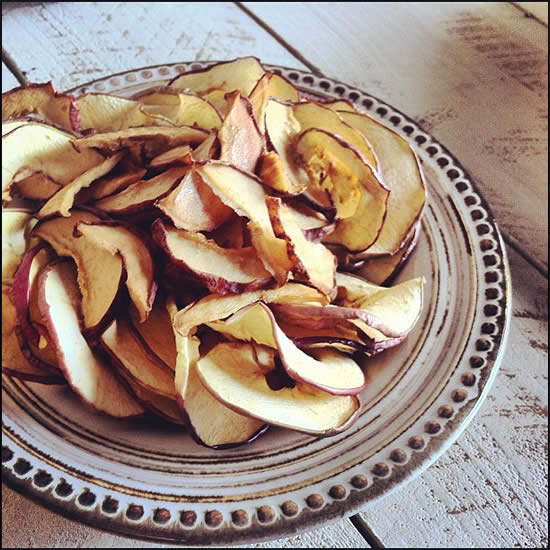 Yesterday was our monthly Food Bloggers Los Angeles meeting — it’s a chance for fellow food bloggers to get together, share some food, and do some bloggy shop-talk. It’s always a potluck, and there’s usually a common theme – this one was “Apples & Pears,” as we’re in the height of the season. Since I’m scrambling to keep all the October Unprocessed plates spinning (so to speak), I needed something extremely quick and easy.

I recently borrowed my mom’s old food dehydrator (made in 1979!) and realized this was a perfect chance to use it. So I sliced up some fruit, set it in the dehydrator, and got back to work. (Truth be told, I was actually on the phone while I was doing most of the slicing.) Couldn’t have been much easier, and you’ve got to love the ingredients. 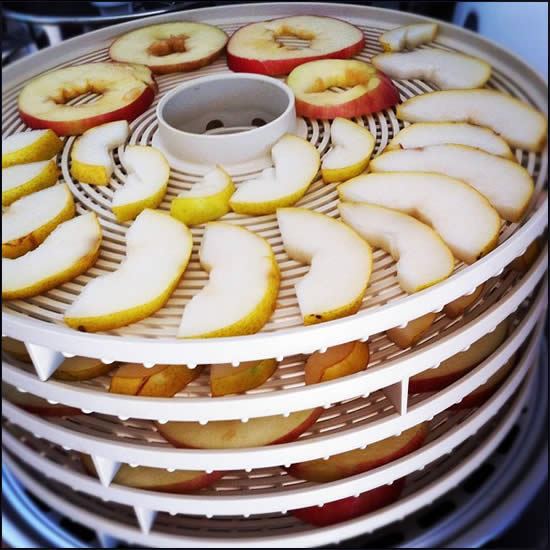 I made this recipe with four apples and two pears, as that was about as much as I could get in the dehydrator. That made about 4 ounces of dried fruit (it's amazing how much they shrink!), which didn't look like much, but was actually a nice amount (that's what's pictured at the top of the post). The fruit should be ripe, but not mushy.
Course Snack
Cuisine American
Prep Time 15 minutes
Cook Time 6 hours
Total Time 6 hours 15 minutes
Yield 4 servings
Calories 30 kcal
Author Andrew Wilder

I learned the hard way that an apple corer would be really helpful -- it took me about five times longer because I had to use a paring knife (and it wasn't pretty). I also don't have a mandoline slicer, so I just did the best I could do keep the thickness of the slices as even as possible. It doesn't really matter if they're a bit uneven, though you'll have to keep a closer eye on them because some will finish sooner than others.

It look yummy with the look!!! Am going to try it with ovum.

You are kind of my hero. October is going to be such an awesome month on this website. Looking forward to being here!!

Pampered Chef makes a tray that use can use to make “chips” in the microwave…apple, potatoe, etc. Basically these but faster…and nice for those of us who don’t have a dehydrator.

I am getting apples in my CSA box this week, so plan to try the oven method on Thursday. Is the best way to store them in a sealed container at room temp?

I put them in a sealed container in the fridge… they’ll keep a little longer that way.