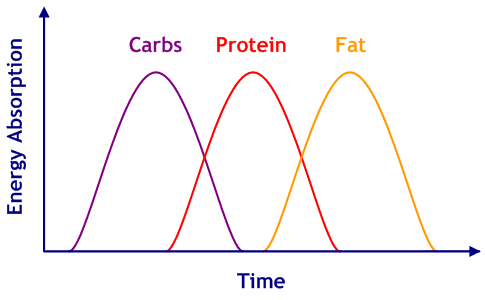 The three energy-yielding nutrients (fat, protein, and carbohydrates) are converted into energy in your body at different rates and times.

Sugars and starches are converted to energy the soonest, followed by protein, and finally fat.

Eating a bowl of fruity pebbles for breakfast may give you a spike of energy very quickly (so you can “jump start” your day, I suppose), but you’ll probably crash within an hour or two after that.

By eating a more balanced breakfast (such as eggs, a slice of whole wheat toast, and a banana), you’ll end up with more consistent energy throughout the day.

If you’re curious as to how this works, here’s a very brief overview of Your Incredible Digestive System.  If you can stomach it (sorry), read on:

This is mostly about mechanical digestion — breaking down the food into smaller bits with your teeth.  Saliva adds moisture, softens the food, and starts breaking down starches.

The gooey wad of food you swallow is called a “bolus” — the third-most awful word in the English language*.

Your stomach has an “upper storage area” where food goes immediately after you swallow it.  Starches continue breaking down here.

Some simple sugars and alcohol are absorbed directly through the stomach lining into the bloodstream (which explains how that Rum and Coke knocked you on your butt so quickly last night).

The food then moves to the lower digesting area of the stomach.  Here, extremely acidic gastric juices and enzymes break down the proteins (and halt the starch digestion).

The food is now a watery ball of sludge (technically it’s called “chyme” — the second-most awful word in the English language*), with most of the fat floating on top (and is therefore last to leave your stomach).

After an hour or two in the stomach, the chyme [ugh] moves on to…

This is where most absorption of nutrients, both macro and micro, occurs.

Simple sugars are absorbed almost immediately, with the rest being absorbed over the next 7 to 8 hours (give or take).

Enzymes from the pancreas and intestine walls (to break down everything) and bile from the liver (to emulsify the fat) whittle down the food until it’s finally absorbed into the bloodstream through the walls of the small intestine.

The large intestine absorbs fiber fragments, fluids, and some minerals.  This is where bacteria in your colon do a good job (hopefully) of the final breakdown of anything that’s left — though most fiber is not absorbed (more on fiber in future posts; I’m sure you can’t wait).  After about another 12 hours (on average), you then excrete whatever’s left as feces.

By the way, the amount of time this whole process can take varies widely among individuals.  The “average” is about 24 hours, but your mileage may vary.

* Hereby I present you with the most awful word in the English language:  Moist.

5,000+ people who keep the weight off
Pickled Carrots & Garlic with Cumin