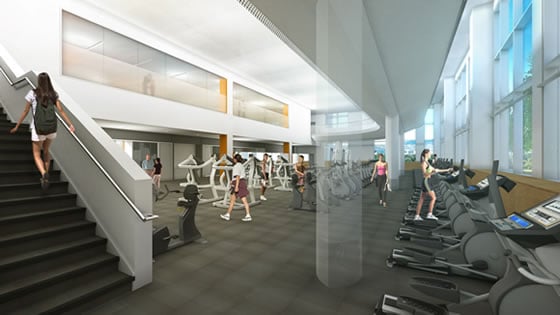 A rendering of the Anschutz Health & Wellness Center’s fitness floor (which looks remarkably like the real thing, except for the semi-transparent column that’s holding up the running track)

Last weekend I attended the Fitness and Health Bloggers Conference, at the University of Colorado’s Anschutz Health and Wellness Center.

At first glance, the two-month-old Center looks merely like a beautiful new gym. But it is far more than that: It’s a visionary facility that will serve as a “wellness hub” for the community, doctors, researchers, clinicians, and business.

The lobby contains a prominent demonstration kitchen and a bistro serving up fresh, healthy fare — using veggies that were grown on their green roof  (the “Better Bean” burger with a side of fennel slaw was terrific!). They have a “metabolic kitchen” that allows them to create consistent meals for test subjects in weight loss and health studies. There’s a demonstration grocery store, accurate down to the price tags and NuVal scores. And the locker rooms are fantastic (which makes me feel not quite so silly for referring to them as “dressing rooms”). 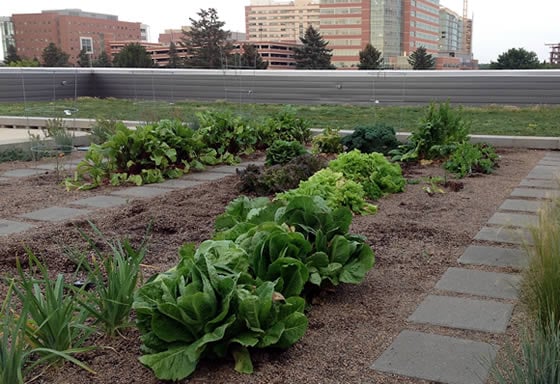 The Green Roof atop the Anschutz Health and Wellness Center. They serve up these veggies in the lobby!

At the helm is Executive Director Dr. James O. Hill, PhD, who has quite an impressive resume. He’s published more than 350 scientific articles, and co-founded the National Weight Control Registry. Also, he’s nice, funny, enthusiastic, passionate, and generous with his time — he spent all weekend with us, as did many of the staff at the Center. (Dr. Hill and his team were kind enough to give us the “run” of the place, leading classes and workshops all weekend long. Everyone’s enthusiasm and helpfulness was phenomenal!)

I attended the conference as a brand ambassador for Attune Foods, one of the weekend’s sponsors (full disclosure: they paid my way).  After serving up a whole-grain and gluten-free breakfast the first morning*, and then working the “trade show” floor for a few hours, my Attune duties were complete and I was lucky enough to get to stick around for the rest of the conference. 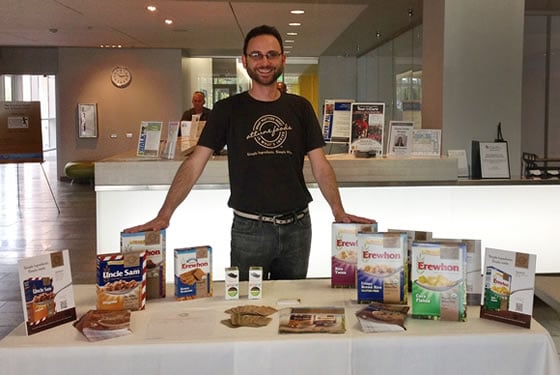 Yours truly, happy to chat about Attune Foods

At Dr. Hill’s keynote speech, The Importance of an Evidence-Based Approach to Health and Wellness, one of his main points was that “Eat less, move more” is simply bad advice.

The problem with the “eat less” mantra is that eating less makes you hungry, and eventually your body’s biological urge will overtake your willpower (willpower has a finite capability).

Instead, the advice ought to be “move more, eat smarter.” What does he mean by that?  The “move more” part entails more than just diligently going to the gym on a regular basis — it means being active throughout the day. That doesn’t mean you necessarily have to break a sweat, though. It can mean taking the stairs instead of the elevator, choosing a parking spot that’s further instead of closer, and so on. Ultimately, we need to change our culture and our environment so we automatically incorporate movement of some kind throughout the day, every day.

As for the “eat smarter” part, it means eating more nutrient-dense foods, and less energy-dense (high in calorie) foods. That means choosing filling and satisfying foods that are also good for you.

This resonates with me personally, since it’s the exact same method I used to lose thirty pounds a few years ago (though I didn’t put these particular words to it at the time).  I still ate quite a lot of food (and six times a day!), so I certainly wasn’t eating less food — it was just that the foods I was choosing were lower in calories and higher in nutrients. (ie, brown rice & sautéed spinach vs. french fries & mayonnaise). 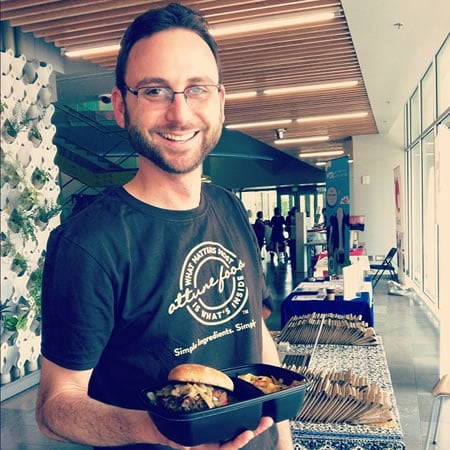 Diet is the driving force in weight loss…

There are two parts to the weight loss problem.  First is losing the weight. Second is keeping it off.

Relatively speaking, the first part is easy. Losing weight is exciting, and seeing the pounds come off (or your clothes get looser), is highly motivating.  The really hard part, as we all know, is keeping that weight from coming back six months, a year, or five years later.

Diet and exercise** are the two best ways to do all of this, of course (I’m not going to get into medications or surgery here — that would be a whole other post!).  The most recent scientific evidence, according to Dr. Hill and Dr. Holly Wyatt, the associate director of the center, is that reducing calorie consumption is the most effective way to lose weight. It’s much easier to eat 500 fewer calories than it is to burn those 500 calories through activity. (That’s one Starbucks Zucchini Walnut Muffin vs. 40 minutes of running.)

This is not to say you should not be exercising — of course you should (and this is indeed one of the few times I’ll even use the word “should”). But the point is that when it comes to losing weight reduced calorie intake is the more important part of the equation.

…But physical activity is the driving force in weight loss maintenance.

So when it comes to keeping the weight off — the boring, un-sexy, really hard part for the long-term — physical activity is the key. Yes, you need  to continue to “eat smarter,” but ultimately, if you don’t stay active, the weight is going to come back on.

As Dr. Hill said quite bluntly: “You don’t have to exercise to lose weight, as long as you only want to lose it temporarily.”  His point is that you need exercise for both weight loss and maintenance — and without it, the maintenance just isn’t going to happen in the long run (pun intended, sorry).

In part 2 of my FHBC wrap-up, I’ll talk about the work of Dr. Iñigo San Millán, the head of the Center’s Performance Laboratory, which adds a fascinating new layer to the “diet vs. exercise” discussion…

* One of my favorite moments of the conference was during that first breakfast, sponsored by Attune. I had set out their breakfast cereals, including Original Uncle Sam and three different Gluten-Free Erewhon cereals. One of the attendees came up, saw the Corn Flakes and asked in disbelief, “Is that truly gluten-free?”  I confirmed it was certified gluten-free, and she just lit up. As she explained that she had not eaten corn flakes in over five years, she started to tear up. It was a pretty powerful moment, and I happily gave her a box to take home.

** For simplicity and clarity, I’m using the words “exercise” and “activity” pretty much interchangeably. There is a lot of research into how much and what types of activity is best for all of this stuff… but that starts to get a bit too nitpicky.  The most important thing is that you find something that works for you, and stick to it.

13 shares
Five Steps to Really Living
Your Mitochondria and You (My #FHBC12 wrap-up, Part 2)

Thank you for this article! This is so clever and oh, so true.
I an EXPERT in dieting – i’m only 27, and have had 3 successfull diets in my life already. whoo. we all know difficult part is keeping your weight off. smart eating, not letting yourself go hungry, lots and lots of activity are the basic rules that helped me keep the weight off for a year now. Thanks for reminding us of what’s important.

Its refreshing when people reject the ‘eat less, move more’ crap. While the author has definitely made a step in the right direction, the truth lies somewhere in between that and what the poster ‘Razwell’ said. Its true that body fat is defended relentlessly usings its hormones, but how much really varies from person to person. We all know people who have failed to maintain weight loss, and we all know people who have succeeded. Unfortunately most people fail because humans just haven’t evolved as quickly as our environment, but we may be able to learn a few new tricks in the future.

Are we still stupid, if we hew to the Law of Thermodynamics, simply because we spend time on the internet ?

“Eat less, move more” is NOT suported by current science looking into the hellishly complex phenomenon of obesity. I suggest ALL of you educate yourselves and look into Dr. Jeffrey Friedman’s and Dr. Douglas Coleman’s work. Body weight in humans and animals is NOT under conscious control. It is INVOLUNTARILY regulated by extremely complex neural circuitry communicating with gut hormones and gut microbiota . There is an ungodly complicated feedback loop. We are NOWHERE NEAR figuring out obesity. Science does at all yet understand the chemical behavior of fat cell receptors. We know about a glass of water. What we DON’T know could literally fill the vast oceans of the world. Only low intelligence people with deep BELIEF systems parrot the “eat less ,move more nonsense.” It is a WROGN HEADED EXTRAPOLATION. The body DEFENDS fat mass. it is NOT passive. It REACTS to any attempts voraciously. Eat less move… Read more »

Disagree that the old adage needs to revised. ‘Eat smarter’ simply feeds the sort of food fanaticism that has become the American hallmark. Eat less is on the mark so long as it implies learning to savor smaller amounts of the foods we already enjoy.

This makes a lot of sense…Especially when it comes to keeping the weight off.

well this is awesome. it seems obvious, right? to move more, eat smarter. now we just have to educate people on what eating smarter means, that is where people go wrong. Thank you for opening this door!