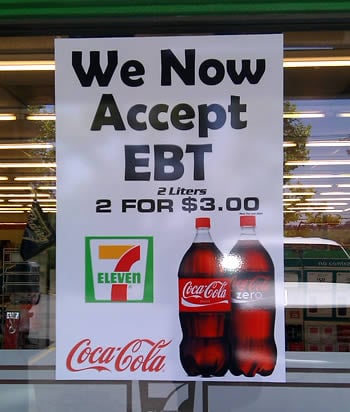 The Supplemental Nutrition Assistance Program (“SNAP”, formerly called “Food Stamps”) serves nearly 46 million Americans a year.  That means about one in seven Americans are now getting government assistance to buy food through this program (the number has been climbing steadily, up from about 27 million around this time in 2007).

The average monthly benefits per person are now $133.80.  Multiply that out and it means we’re spending over $65 Billion a year on SNAP (and the numbers are growing every month: It’ll be over $70 Billion for 2011).

I’m certainly not opposed to ensuring that nutritious food is available to every person, but it sure seems to me that the entire SNAP program is a band-aid, not a solution to the underlying issues. But that’s a topic for another time.

The part that I am opposed to?  Of that $65 Billion, about $4 Billion goes to buy soda and other sugar-sweetened beverages.

So first we subsidize the production of corn, which allows us to produce high fructose corn syrup at an incredibly low cost. Then we turn it into nutritionally-devoid sugar-water, and give people money to buy the stuff. About half of that money goes back to the manufacturers — so we’re subsidizing these companies on both ends, and all the while we’re in the middle of an obesity and health crisis!

Last October, New York asked the USDA (which administers the SNAP program) to try an experiment. They wanted to disallow the usage of SNAP benefits for purchasing sugar-sweetened beverages.

A few days ago, the USDA rejected their request. The primary reason?  “Too complex.” (I’m paraphrasing). Their rejection letter [PDF] does go on to make some valid points, but in my opinion, none of them should have been dealbreakers.

It’s important to note that there are already other limits on what can be purchased with SNAP benefits (alcohol, cigarettes, foods that will be eaten in the store, and more).  Many of the rules don’t make much, if any, sense from a nutritional standpoint. For a great first-hand example of this irony, read this incredible story of Chicken vs. Twinkies from Kimberly at Poor Girl Eats Well.

I also dug up this 2007 PDF, in which the USDA makes their case against restricting the use of food stamp benefits. So it seems the USDA had already dug their heels in on this issue awhile back — and still took nearly a year to reply to Mayor Bloomberg’s request.

Interestingly, in their rejection letter, they point out that they prefer incentive-based solutions, and specifically reference a pilot program in Massachusettes that “increases SNAP benefits when fruits and vegetables are purchased.”  (Great!).  Implementing an incentive program such as that sounds about as complicated as the one Mayor Bloomberg proposed — which pretty much invalidates their “it’s too hard!” argument.

Moreover, the USDA also administers the excellent Women, Infants, and Children (WIC) supplemental nutrition program. WIC participants “receive checks or other vouchers to purchase specific foods each month that are designed to supplement their diets with specific nutrients.”

So it seems the USDA is talking out of both sides of its mouth. They claim that they don’t have the ability to restrict what food stamps should be used for (even though they already do have some restrictions), and that it wouldn’t be effective anyway.  On the other side, they administer the WIC program, quite effectively, which does exactly that.

(In case you’re wondering, in 2010 the WIC program, which is funded differently than SNAP, had about 9 million participants, at a total cost of about $6.7 Billion.)

Obviously, this one change proposed by New York would not have been enough to combat obesity in America on it’s own — that’s just silly. The USDA points out that it might not have a significant impact (or even could have some negative impacts). But when the negative impacts of sugar-sweetened beverages are already so well-known, it sure sounds like lunacy not to at least try it.

Considering that it’s supposed to be “Supplemental Nutrition Assistance,” and that soda has no nutritional merit whatsoever, I’m really struggling to see any valid reason why people participating in SNAP should be allowed to use their benefits to purchase it.

What do you think?

I tried to keep this post brief, since this topic is already being covered quite well. I recommend reading these excellent articles by Megan Cottrell, Tom Laskawy, and Andy Fisher for more.

Want to hear something positive about SNAP?  Recipients can use their benefits to to buy seeds and plants which produce food to eat. Nice.

Photo courtesy of The California Center for Public Health Advocacy, on Twitter at @CCPHA.

The author and commentators fail to point out that food stamp program is for adults not infants and children and WIC. What determines the value of food stamps, the thrifty food program along with deductions. The thrifty food program publishes statistics, however the value used is adult males between say 19-50. Women generally need less calories than men, should women get less food stamps or the eldery? The maximum SNAP benefit is based on the 19-50 male diet. The problem with the definition of “healthy” is that it varies by gender,occupation,age,etc The “Soda ban” would allow diet sodas, concentrated food juices that basically have most of the nutrition of the fruit removed such as the fiber, and chocolate milks, which may have more sugar than many sodas. However, the soda ban would not allow gatorade and vitamin water which is more healthy than concentrated fruit juices, in the minnesota case,… Read more »

“Considering that it’s supposed to be “Supplemental Nutrition Assistance,” and that soda has no nutritional merit whatsoever, I’m really struggling to see any valid reason why people participating in SNAP should be allowed to use their benefits to purchase it.” I totally hear you. But basically Andrew, it boils down to only this… NO ONE should drink soda. It isn’t good for us. Period. End of sentence. However, if you and I as people (presumably) living above the federal poverty line have the OPTION of purchasing it or not (hopefully the latter) then so should someone that is accessing government programs to help supplement their low income. Its that simple. Its their right to choose. People are people no matter what their income, and should have the freedom to make their own choices regarding what they consume. This is why education about nutrition, and incentive based programs like Double Up… Read more »

I worked in a grocery store as a cashier when I started college. I saw people abusing the system by buying $50 of meat like chicken from the meat department at a time and could easily overhear them talking about reselling it, which is ILLEGAL. Some customers did buy soda like some other said as a little “splurge.”

I now am on SNAP myself because I have become so disabled I can’t even stand in a long checkout line and waiting on disability appeal. The problem also is high school home ec kids are taught how to bake sweets instead of shown how to eat well on the budget. I learned a lot on how to eat better on a budget thanks to shows like Guy’s Grocery games on food network.

I know this is an older post, but I really wanted to comment, as this topic is one that I have a very strong opinion about! I am a young wife and mother and our little family is currently on SNAP benefits due to the loss of my husband’s job. We GREATLY appreciate the benefits we’ve received thru the program and we plan to repay, in a huge way, what we’ve had to use during this short time – my hubby just signed a 6 year contract with the Navy. Anyways. I am EXTREMELY passionate about healthy foods and healthy eating!! My hubby claims that if the rest of the world hated HFCS as much as I do, we’d put the HFCS companies outta business in NO time!! LOL We receive $234 a month for a family of 4. With this amount of money, we eat an entire REAL foods… Read more »

Using this logic, one would not help but wonder your stance on purchasing refined sugar with food stamps? Brown sugar? Both of these items have no nutritional value.

Soda, cigarettes, and alcohol. All of them are known to cause disease, but only two are regulated. As the poster in the pic above indicates, the soda industry leaders are trying to manipulate people with SNAP benefits into buying a product that is harmful to your health. Cigarette and alcohol advertising is restricted by the government, so why is the soda industry allowed to be so strongly linked with efforts to reduce hunger? The scientific evidence against daily soda intake, even diet soda, is clear. I agree we should ban soda from SNAP benefits, but allow any food with nutritional value. This is not blaming the recipients of SNAP benefits, but instead the shameful practices of the soda industry.