By Andrew in Happening Now; Strategies
Published on January 25, 2011 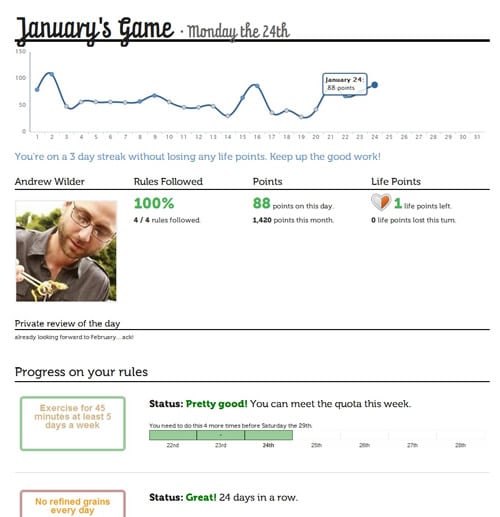 Buster Benson has created a website (webgame, really) called Health Month, in which you choose the healthful living and healthful eating rules you want to follow for the month, join a team, and then “play the game” by checking in each day and reporting how you did the day before.

Okay, I’ll admit it. it sounds kind of dorky at first, but Buster has designed it in such a fun, whimsical, and interactive way, that you can’t help but want to play around on the site and check in each day.  I’ve been playing for the month of January, and it’s definitely got my thumbs up.

What I like most is that it emphasizes the social aspect of achieving your goals.  There’s a team “Game Wall,” in which you can leave comments (such as: write support and encouragement for your friends, go on tirades about how hard it is to avoid high fructose corns syrup, or just shout from the rooftops that you lost two pounds that week!).

You start by defining your rules for the month.  There are dozens of predefined rules you can select from in a variety of categories (“Exercise!”), or you can make up your own.  You then specify exactly how many days a week you’ll follow that rule (“Exercise four times a week!”)  and how hard you think it will be for you to follow the rule (“Damn near impossible!”).

Depending on the number of rules you set up and their difficulty, you’ll be placed in a bracket.  You can also join a Team, and that’s where we come in!

Here’s your chance to join Team Eating Rules for the February game — and play for free!

1. Go check out Health Month and decide if you want to commit to playing in February (and I hope you will!)

3. I’ll email you a private access code so you can sign up and join the team for free.

Buster has generously offered free games for our first 25 players, but even if there are more of us, you can still join! (I think it’s $5 for the month).

I’m also going to send a prize to the winner at the end of the month… I haven’t figured out what it will be yet, but rest assured it’ll be cool.  Promise!

So what are you waiting for?  Leave a comment below and let us know you want to play!

Guest Post: A Quick Primer on Trans Fat
Dance with me

I am so into this! Great idea! My sister and her husband and I loved Unprocessed October, and I am currently sticking to January Rules, so this is a great continuation!

I found your website a few weeks ago via the What’s Cooking with Kids site and I love it! So many great ideas here. I’m in for joining the challenge. I will be adding my own New Year’s food resolutions too (or a least a couple of them–I had eight to be exact!) So count me in!

I want to play!

I’m in. A huge step for me, but February is my birthday month and what better way to celebrate than by eating healthy. Thanks for offering this!!

Hey! I just found this website! I have started eating clean and avoiding processed foods since the beginning of January and I love it! I want to join the team! Sounds like fun!

Yay! Congratulations on the switch to clean eating. Awesome! 🙂