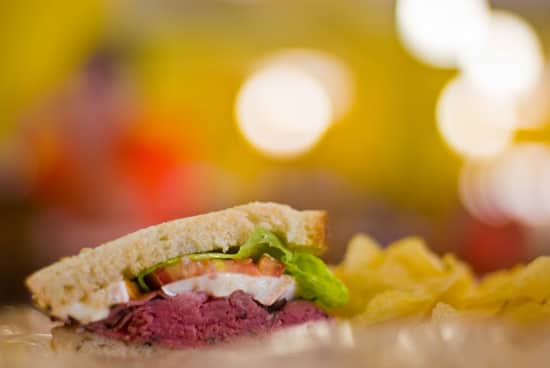 Eating Rules reader Katherine recently asked me to make suggestions for healthier options at Au Bon Pain, a “fast-casual” soup-salad-sandwich chain with over 250 locations around the world.

Over the past few years when I have eaten at Au Bon Pain, it’s always been at airports — you’ll find them at JFK, LGA, DFW, MIA, BOS, and more. Since my personal experience lately hasn’t been at their full locations, which feature many more options, I’m basing my recommendations on the nutrition information provided on their website and my own best estimates. Conveniently, their website lists all their locations, and will show you the menu for each one separately — including the airports, so you can plan ahead a bit when you’re traveling.

You can only glean so much from nutritional numbers, so it’s good to see what kind of ingredients (additives, preservatives, flavorings) a chain may or may not be using. They reveal their ingredients on the website, though it takes a few clicks and scrolls to drill down to a specific item.

One big caveat, if you’re poking around on the specific items on their website: All of the items from their “Hot & Cold Lunch Bar” are listed per ounce, so it takes some work to figure out what a reasonable serving size is and then how many calories, etc., you’d end up eating..  For example, I checked out the Macaroni and Cheese, and was surprised to see that it only has 100mg of sodium. Then I noticed that the serving size was for one ounce…  so that’s 100mg per ounce. A tennis-ball-sized scoop of Mac & Cheese would be about eight ounces (and therefore 800mg of sodium)… and that’s not very  much Mac & Cheese.

I’m not going to review every single menu item — I’m skipping the desserts and pastries.  I’m also skipping the “Blasts” and smoothies — which all have quite a bit of added sugar. Unless it’s a cheat meal, it’s probably best to avoid all of those entirely.

90 calories, 230mg sodium, 6g fiber.
This is by far the best bagel choice. The first ingredient is whole wheat flour (nice!), though some of the fiber is from added cellulose. Meh.

Honey 9 Grain Bagel
310 calories, 480mg sodium, 6g fiber.
Although it’s about 30 calories more than than the plain or onion dill bagels, at least there’s a bit more fiber. It’s also a little larger, which means at least you’ll be a little fuller for those 30 extra calories.

Any of the bagel sandwiches will be vastly improved (nutritionally speaking) by getting them on a Skinny Whole Wheat Bagel.

230 cal,  510mg sodium, 6g fiber.
I’m not in favor of egg whites over eggs — but this is a standard menu item that’s an easy choice, since it’s on a skinny bagel by default.

Eggs (or Egg Whites) with Cheddar and Avocado, on a Skinny Whole Wheat Bagel, hold the Lemon Aioli

Approx 280 cal, 510mg sodium, 9g fiber.
This is what I would order for breakfast.  The avocado adds extra (good) fat and fiber, both of which be satisfying. Skip the Lemon Aioli, though, which as far as I can tell, just adds unnecessary salt, sugar, and canola oil.

Bacon and Egg Melt on Ciabatta

The best choice would be to get a half sandwich. The suggestions below are all 550 calories or fewer and under 1,000mg of sodium.

Some of these are here for the high calories, but most are because they’re so high in sodium.

Both are over 1,000mg sodium, and both include partially hydrogenated oils in the seasoning.

Nutrition numbers below are for a 4 ounce portion (they list 1 ounce portions in their nutrition info, which makes it somewhat tricky to compare).  Also, it’s a shame how much salt and oil they add to their veggies.

Pearl Barley with Vegetables
200 cal, 225mg sodium
Note, this is made with chicken.

These numbers are without dressing (see below for dressing info).

Thai Peanut Chicken Salad
200 cal, 300mg sodium
Careful, though, the Thai Peanut Dressing is one of the worst!  It’s only a good choice if you skip (or minimize) the dressing.

None of the dressings are great.  The Raspberry Vinaigrette is the only one under 100 calories, but comes at the cost of being mostly sugar.  The best choice is to use the dressing very sparingly — and not eat the entire 2 ounce serving.  Ask them to give you the dressing on the side for any salad, and then you’ll have more control.

I’m listing the info for small (8 ounce) servings of soup, which would be a good choice to accompany a half-sandwich.  As with most restaurant soups, calories are less of an issue than the high sodium content.

45 shares
Your Mitochondria and You (My #FHBC12 wrap-up, Part 2)
A California Avocado Tour