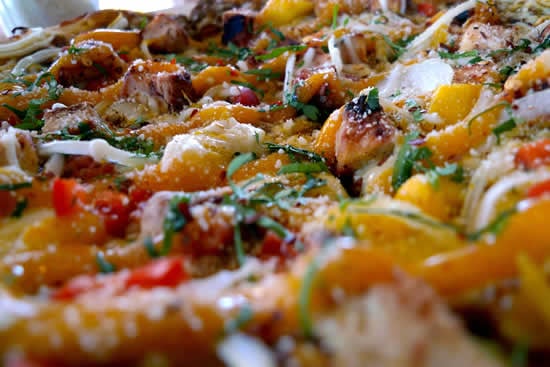 Last week I reviewed the Healthiest Appetizers, Soups, and Salads at CPK.  I had suggested skipping the appetizers altogether, but after going through the rest of the nutrition information, I now think it might be a better strategy to order solely from the appetizers menu, and avoid the pizza and pastas.

All but two of their pizzas have calorie counts in the four-digit range (the Traditional Cheese, at 998 calories, and the thin crust Roasted Artichoke & Spinach, at 985 calories, are the marginal exceptions). Their most-caloric pizza, the California Club, tops out at 1,515 calories.

Perhaps even worse, all but one pizza has over 2,000 mg of sodium (the exception is the thin crust Tricolore Salad Pizza, without meat, at 1,911).  The worst offender?  The Jamaican Jerk Chicken, at a heart-stopping 4,056mg of sodium. (Consider: Just the dough has around 1,000 calories). Even if you split it, you’ll be getting nearly a full day’s max of salt in that half-pizza.  Yikes.

So, what to do? Well, if you’re going to indulge with a pizza, here are some ways to mitigate the calories and sodium:

Even thought the Honey-Wheat has whole grains, and nearly three times the fiber, it’s probably better to stick to the thin crust and thereby cut down on the already-high calories.

I’m highlighting the worst offenders here — over 1,400 calories or over 3,000mg sodium.  (These are on the “traditional” crust, unless noted, to help convince you the better options above are the way to go!)

The pasta options are very high in calories and sodium, though I suppose sharing a pasta dish could be better than sharing a pizza.  You can substitute “multigrain penne” for any pasta, saving up to 121 calories (I’m not sure how you’d substitute ravioli…)

I’m not really a fan of any of these pastas, since they’re just huge bowls of refined carbs and salty sauces. (I didn’t find any details on the “multigrain penne,” but remember that “multigrain” just means “more than one grain,” and not “whole grain.”)

Some examples of the dishes with the most calories and sodium…

Every single option in this category is over 1,000 calories or over 1,100mg of sodium, except the Chicken Milanese.  Nevertheless, there are some choices that are significantly lower in calories than the rest of the menu’s options — so relatively speaking, they’re better choices.

Wild Caught Mahi Mahi with Wok-Stirred Vegetables
586 cal, 1,591mg sodium
Ask them to go easy on the sauce and you’ll likely save a lot of that sodium.

All the sodium counts are in the four-digits, whether you choose the Herb Onion or the Garlic Cheese Focaccia.  Even so, the Herb Onion is a significantly better choice, saving you about 70 calories and 200mg of sodium.

The sandwiches come with a choice of soup, Caesar salad, or Szechuan slaw — see below for details on those.

Turkey Stack Sandwich with Herb Onion Focaccia
745 cal, 2,225mg sodium
This is the lowest-calorie sandwich option, but one of the highest in sodium.

I can’t really imagine feeding my kid a 700-calorie and 1,400+mg sodium pizza but hey, at least they’re smaller than the full-size pizzas.  Here are a few of the best options from the entire Kids’ Menu.

258 cal, 251mg sodium
Take a reasonable salad, and then douse it with nearly 200 calories of fatty, salty dressing.  Ugh. (Still better than a pizza, though!)

1,088 cal, 750mg sodium
Don’t fall for the “health halo” of Edamame.  This still over one thousand calories!

In what world is an ENTIRE CPK pizza the correct portion size??? It’s at least twice what most adults should be eating as a portion. So cut all these numbers in half, or a third, and you have a reasonable meal!

Although I don’t eat at CPK, ugh, I am astounded at the calorie content but the sodium is beyond belief!

Yep. It’s really amazing just how much salt is in typical restaurant fare… and CPK is really a typical chain, not an exception.

Makes me long for the good ol’ days, when dining out used to be a once-a-week treat.

After I saw this, I had to go back to Part 1 and see my worst Thai Chicken Spring Rolls and sorta-awful Thai Crunch Salad. I do alright in the pizza department… Again, such a great break down. I’m sending this to my family members that “eat there all the time.” I always learn something when I’m here. Thanks, Andrew!!

Glad this is helpful and/or enlightening… And I hope your family gets a lot out of it, too! (also, thanks for the tweet a moment ago… you rock.)

Those sodium numbers are crazy. Someone needs to email this blog post to the company!! Insane that they think that is ok — don’t they have nutritionists?

Sadly, this is pretty typical for this type of “chain casual” restaurant. I cc’d CPK when I tweeted (on both posts), so if they actually watch their twitter mentions, they should have seen this by now. Haven’t gotten any sort of response…