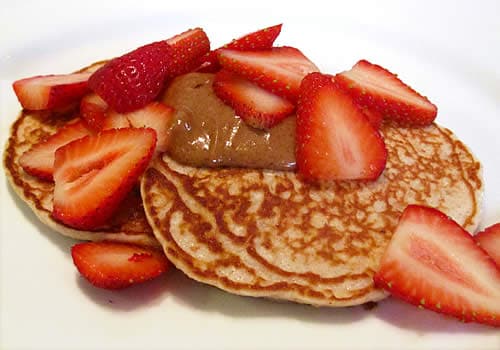 I love pancakes, but I usually avoid them because they’re a total carb overload, leaving me feeling bloated and lethargic for the next several hours (I know I’m not alone in this, thankyouverymuch).  However, I recently came across a terrific recipe for “protein pancakes,” by way of a friend’s girlfriend’s friend’s blog.

Dani Spies is a culinary nutritionist who offers up tons of wonderful recipes on her site.  She’s posted two of her own versions, a blueberry protein pancake and an original.  Her pancake recipes, in turn, are based on Bill Phillips’ Golden Pancakes.

Phillips uses artificial sweetener in the pancakes (but recommends maple syrup on top, oddly).  I prefer to use honey — the small amount of sugar is okay in my book, since it’s less than a teaspoon (3 grams) of added sugar per serving.

I’ve also put my own spin on them, swapping Greek yogurt for the original cottage cheese, since, as you know, I’m a fan.

These deliciously healthy pancakes have so many modifications that can personalize these to be your dream pancakes without the guilty aftertaste!

I topped mine with strawberries and almond butter, though these pancakes are pretty dense to begin with, so you may want to trade the almond butter in for some low-sugar preserves or -- what the heck -- even a drizzle of maple syrup.

I’m experienced at making pancakes and working with grains. I’m pretty fearless about changing recipes. I do often lack common sense. Generally my experiments turn out well, but sometimes ….

I decided to cut the recipe by 2/3. No big deal. I decided to substitute my breakfast grains mix for the oatmeal. The mix does have oats in it. Plus NF died milk, chia seeds, nutritional yeast, hemp hearts, plus about eight other ingredients. Berries even blending with the yogurt, I decided it needed a good splash of milk.

The mixture was liquid, very liquid. I didn’t want to add more oats. So, I added baby carrots, also chopped in the blender. I also added some salt and spices.

Next time? I think I’ll make it about the same, but more spicy. Maybe some Sriracha

Healthy pancakes that are actually good! Yes, they are dense. Normal pancakes I usually eat 3 but with these I ate 5. They don’t give you that bloated, full feeling. I used 3 whole eggs instead and added strawberries and mini chocolate chips (dairy free brand). They tasted delicious! I’m so glad I found this website. Thank you!

These are amazing! Thank you.

My partner can’t have dairy. Can I use soy milk? If so, how much approximately?