Amy Holan is the author of Seasonally Seattle, a blog about eating within a 250 mile radius of the Seattle area for an entire year — on a budget. Her blog covers the span of their journey, including recipes, DIY tips, and her diary of the impact on their lives.

Through this experiment, which began on September 22nd, they have been discovering the unexpected benefits of eating locally, including baking bread from scratch using local wheat, and knowing where all of the food on their table comes from. As part of her project, she’s been researching Heirloom varieties of fruits and vegetables, and today she shares some of what she’s learned. 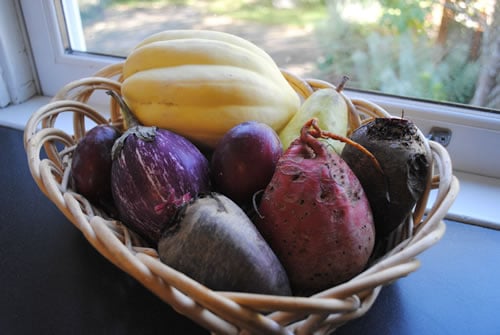 Buying fruits and vegetables from the grocery store can sometimes lead to disappointment. We’ve all been there – you buy a tomato, only to get it home and find that it’s bland and grainy. I always assumed it was the season. While that might have been the case, it could have also been the breed of tomato I was buying.

I had seen the “heirloom” varieties at the store before, but they were so expensive it was hard to rationalize. Instead, I opted for the perfectly-formed, albeit tasteless, fruit, and patted myself on the back for saving a couple bucks. It wasn’t until I committed to eating locally for a year that I discovered what I was missing out on.

An “Heirloom” varietal is grown from a seed that is known to be cultivated for at least 50 years. Heirlooms aren’t only for tomatoes, either. Melons, potatoes, squash, onions, beets, spinach — you name it, you might just find an heirloom in the midst. These ancient fruits and vegetables are grown from seeds that are often handed down from generation to generation. The older the seed, heirloom purists will tell you, the fuller the flavor, and research is mounting about the health benefits, too.

These days, biotechnology is used to alter the genetic makeup of seeds for a variety of reasons. Making them more resistant to insects and viruses ensures larger yields, leading to larger profits. And the more durable the vegetable, the less likely it is to go bad on those long international journeys to our local grocery stores.

Seed suppliers are also modifying the seeds to last only one season, forcing farmers to buy seeds year after year. Through all of this modification and cross breeding, some fear, we are losing more than just flavor from our veggies — vitamin and mineral content is disappearing too.

In a USDA study, nutrients in vegetables studied during a 50 year period declined considerably: 17-30% in protein, 30-40% for calcium, vitamin A, thiamin and riboflavin.

Seeing some of this data, you might think farmers would be excited about tapping into the blossoming heirloom market. But most farmers need to focus on mass production to stay in business, and growing only heirloom crops is risky.

First, they are open pollinated, meaning it’s up to the wind and good ol’ Mother Nature to determine what their crop will yield. You may have a successful season, and you may not, which is fine for small farms or personal growers. But when it comes to paying the rent, heirlooms aren’t that reliable. Since there is usually little pesticide use with heirlooms, they also have a greater chance of catching a virus that could potentially take out an entire crop.

While it’s risky, there are some farmers who are raising dynamic gardens, yielding plentiful supplies of heirlooms for you and me. A good place to look is at your local farmer’s market. After understanding the background on heirlooms, the risks involved for the farmer, and the higher nutritional content for me, I’ll definitely be able to justify the cost.

But the best way to ensure a healthy dose of heirlooms? Grow them yourself.

You can buy seeds to get you started, and in the fall save your seeds to use again the following year. Seed Swaps are also popping up around the nation, where you can trade your own heirloom seeds for other varieties with people in your own area. Even if you have a tiny plot of land, or no land at all, you can grow a small vegetable garden focusing on heirlooms. Your taste buds will thank you.

Thanks for all of the great comments! Andrew, thanks for the opportunity to post–it was fascinating to discover so much about Heirlooms! I can’t wait to plant mine in the spring. Thanks for the well wishes on Seasonally Seattle–it’s a work in progress! 🙂

Winnetka Farms: Thanks for chiming in with your advice! Sorry I missed Artisanal LA – had I been in town that weekend I would’ve been there, for sure!

Xan: Thanks for the nylon stocking advice. I’ll file that away for when I have a backyard and room to start growing more!

Johanna: I agree, I’m not growing my own (yet!), but Amy’s post definitely helped open my eyes to what “Heirloom” means and now I can apply that knowledge as a more savvy consumer!

Amy: Thanks again for this great post! I hope your local eating challenge continues to go well!

As a newbe to learning about heirloom veggies beyond tomatos, I really appreciate this article and your advice. While growing my own seems to to be a little advance at this stage, I will now keep a lookout for other variaties of squash and melons.

It’s easy to isolate tomatoes and peppers to avoid cross pollination. Since they are self-pollinators (don’t rely on insects), once the flowers start to color up (i.e. just before they turn yellow for tomatoes, or white for peppers) simply bag them with the toe of a nylon stocking and cinch it. Once the fruit has set, you can unbag it and know that the seeds from those fruits will be true (unbagged fruits are at risk of crossing, but frankly I’ve never had this problem with tomatoes). The benefit of saving your seeds is that after a few years, you’ll have bred your own plants that are successful in your specific micro-system, namely your own backyard.

For those of you, check out Artisanal LA! Today is the last day, downtown LA at the Cooper Building. Winnetka Farms will be there selling Heirloom Italian seeds! (Also on our web page http://www.winnetkafarms.com)

Artisanal LA celebrates LOCAL producers of food and food related items. The Backward Bee Keepers are there, as well as Lindy & Grundy, a new butcher shop on Fairfax that specializes in humane, grass fed pastured animals… (NOT CAFO), run by two women! And they are awesome! The event is busy and there is a lot to see, taste and learn from!

(Sorry for the plug, but Artisanal LA was so much fun yesterday, people should know about it! )

Great article! I began saving squash seeds a couple of years ago, but will be looking for my more of my seeds in the spring from heirloom sources. I rarely buy strawberries any more. The flavor has been bred right of them as they got bigger and more beautiful every year. I love garden surprises so it will be fun to see what I get the following year. Of course, I will still plant some of my favorite seeds that aren’t heirloom just to be sure we have the full benefit of a home garden.

Remember, that even if you save heirloom seeds, they may not come true! For example, if you grow a beautiful heirloom tomato (let’s say a red pear), the seeds for that tomato could have been pollinated by a bee that just visited your neighbors “cherry” tomato next door…

The result? Maybe wonderful, maybe awful…. so you need to also understand what is called “Isolation distances for pollination.” Corn, for example, pollinated by the wind, can be pollinated from up to 3-5 miles away!

So, yes, by all means, save your seeds… but if you want that specific variety of tomato again, the purchase of the seeds from a reputable seed company is well worth the cost.