This homemade dip is a delicious replacement for the instant packages of junk. Trust in this dip, it’s the real thing! 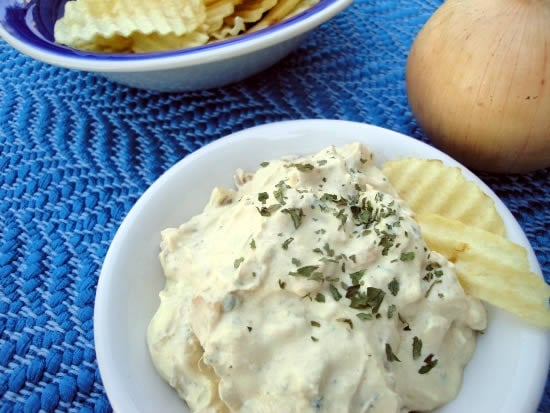 Which of these ingredients from this box of processed “food” do you have in your kitchen?

If you have an average home kitchen, you probably have the first four on hand and wonder what exactly the last four mean (and are they really food?).

When cooking “unprocessed,” many of your favorite recipes may have to go by the wayside because they use a processed food (Kraft Foods and Campbell’s cream of soups are famous for their delicious and easy recipes, right?).

My goal today is to help you “unprocess” those recipes that use ingredients that are already found in a box or a can.

I find that when I’m trying to reverse engineer something, it’s an exercise in common sense most of the time.

The ingredients I listed at the top are from a box of “onion soup mix.” When I first tried to replace the mix with real food in my husband’s favorite pepper steak recipe, my thought process was something like this:

Working from those Q&As, I kept it simple. Using real onions almost exclusively really does do a pretty good job of replacing onion soup mix when used in beef recipes.

I use lots of onions and cook them well, and the caramelizing adds the flavor that is perhaps lost with the chemically enhanced ingredients.

Other than that, a generous dash of salt and a bit of molasses (which I like in savory dishes in small amounts) completed the meal without any additional seasoning.

When I’m feeling more creative, I might try adding other spices such as fresh garlic, parsley, and other herbs I know we like. It might not be exactly the same as the old favorite, but sometimes it even gets better.

How to Reverse Engineer ANY Box

Got a recipe with undesirable packaged food? You can probably make it even better yourself. Grab the recipe and ingredients and get to work:

When I told Andrew I wanted to share a reverse engineered onion soup mix, he immediately rejoiced in the fact that he might be able to have a real food version of that chip dip made with sour cream and a packet of onion soup mix.

I could practically hear him jumping up and down through the computer screen text.

How could I tell him that I had no idea how to do that and had only used onions to make pot roast and pepper steak that tasted pretty good?

I couldn’t break his unprocessed heart, so I gave it the old college try with three different versions.

And the verdict from my college sweetheart (aka the Husband)?

He says if he had this dip and “the real thing” (meaning from the store) to choose from, or even the second best attempt, he’d choose the homemade version.

And he’ll tell you without batting an eye that there are plenty of packaged things he’d choose over my “real food” versions, so don’t think he’s just being romantic. 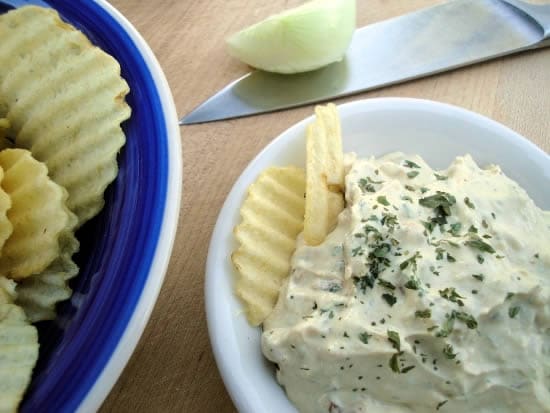 This homemade dip is a delicious replacement for the instant package items able to be purchased at the store, trust in this dip, it's the real thing.

* Be sure to watch the ingredients on the sour cream, which can have as many unknown processed components as the soup mix if you're not careful. Daisy brand has cream, salt, enzymes. That's as close as I can find to making my own (there are other brands that achieve it, including Aldi brand). If the dip seems lacking in something, try adding more salt (up to doubling it) or a bit of sweetener to truly mimic the processed foods. For different textures and flavors in the base, try using yogurt cheese or homemade mayo or some combination of the three including the sour cream. Barefoot Contessa's original recipe called for ½ cup of each but far less seasoning overall. Something to try: mix into Greek yogurt if sour cream is still too “processed” for the challenge. Shortcut tip: Cook the onion in a pan as you're prepping dinner, then use that pan for dinner. Saves on dishes! The no-cook version: This one isn't quite as amazing, but it's as good as the processed version and quicker in a pinch. Add to one cup sour cream: - 1 1/2 Tablespoon dried minced onion - 1 teaspoon dried parsley - 1/4 teaspoon black pepper - 3/4 teaspoon salt (or more) - 1/4 teaspoon onion powder (or more) - 1/4 teaspoon turmeric - 1/8 teaspoon celery seeds (or celery salt) - dash cayenne

What I love most about this recipe, beyond the fact that my husband loves it, is how it knocks the chip dip in the store right out. Check out these ingredients:

If you ask me, that’s 7 actual foods plus 18 chemicals, non-foods, and food-like products.

The terrible irony of this post is that in order to test the chip dip, I bought a bag of chips.

Probably the first bag I’ve purchased in a year (hmmm, maybe that’s why the husband was so agreeable to the dip!).

If you make this chip dip during October #unprocessed, you’re going to need to make homemade potato chips, too.

But (crunch)…it will be worth it.

Katie Kimball is a wife and mother to four thriving kids who eat their vegetables.  She writes the blog Kitchen Stewardship, where she offers weekly “Monday Missions” with practical baby steps, healthy recipes, green living ideas to help her followers reach their healthful goals.  She has spent 10 years on her real food and natural living journey and shares her tips and strategies along with her prayerful encouragement.

Turned out great. We use it for veggies and skip the whole chip issue.

I make homemade chips now. Yummo!!! I read old cookbooks and get general premise for recipes. Most of old ones made everything from scratch. No boxes…maybe a can of something since canning is old.

There’s one distinct problem with this recipe. I can’t stop eating it!

And waiting an hour to let the flavors blend….that’s some serious self-control! 🙂

Oh, wow. Second day yumminess! It gets better with age.

Super article Katie! I think this is my favorite part of unprocessed cooking…taking something processed, breaking it down into it’s simple ingredients, and voila!!! My own creation is usually much better than processed and I feel like MacGyver in the kitchen (grin).

I’m having a definite impulse to just make and eat a batch of this for lunch today with as many vegetables as I can get my hands on. Sounds so good!

Why would you use unhealthy butters, dairy and oils?

Nancy,
If one is allergic to milk or lactose intolerant, sure, it’s unhealthy – but people have been drinking milk for many 100s of years, and I for one count well-raised animal products among the healthier foods we can find. REAL butter (mine is organic and grassfed) rather than “butter” made in a lab by scientists has been demonized, but mostly by the companies that sell fake butter. There weren’t any oils in this recipe…I don’t trust industrial oils like corn, soybean, etc. any farther than I can throw them. Probably less.

There’s always someone who says something bad about every food out there (even water!), but for me, I measure health in large part by what humans have thrived on for 1000s of years, rather than 50-100 years.

Thanks for the good question!
🙂 Katie

A little while back I wrote a post about milk which you may find interesting. It’s a difficult topic, and people seem to be incredibly passionate about milk in particular.

This is fantastic! I’m hosting Thanksgiving this year and a staple of my family holiday meals is celery stuffed with cream cheese mixed with onion soup mix. I’m totally going to do the filling this way. Just use cream cheese instead of sour cream right?

I love your tips to un-process packaged food! This onion dip sounds heavenly and I’ll be making it this weekend for a football crowd.

I tried making a ranch dressing because I normally add it to the miracle whip when I make devilled eggs. I was going to omit the miracle whip but found it to be bland. I’m not good figuring what flavor/seasoning is missing. I ended up not eating any of the finished eggs because of the Miracle Whip, but I did have to taste the yolk to be sure it was ok. I sprinkle tops with Salad Elegance for extra zap of flavor.
I’ll keep trying to get it right, I keep trying to cut out sodium & that may be my downfall.
My Quick salad dressing or dip recipe is Greek Yogurt & juices from tomato or diced up tomato. When I cut tomatoes up for my salad I squeeze the juices into the Yogurt! Mix it up & the pour it on the salad.