Christina Le Beau is a journalist and blogger who writes about raising food-literate children at Spoonfed: Raising kids to think about the food they eat. Her goal with Spoonfed (and its companion Facebook page) is to raise awareness of our food system, make kids part of the conversation and, importantly, encourage people to rethink their assumptions about kids and food. 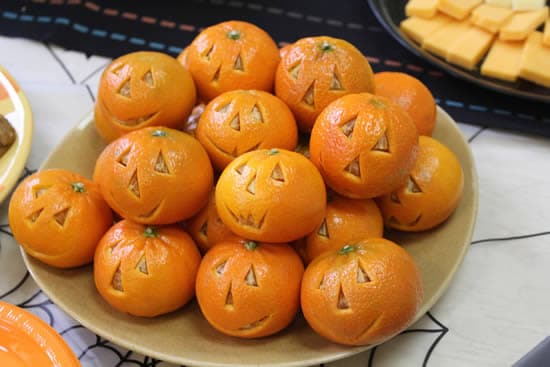 My almost 9-year-old trick-or-treats. She roams the neighborhood with friends. She collects candy. She eats a couple pieces. But after the fun is done, we have another Halloween tradition: Divide and conquer. Anything with artificial colors, fake sweeteners, trans fats, high-fructose corn syrup and chemical preservatives gets tossed. Right in the garbage. (Or saved for gingerbread houses.) What’s left (and there’s not much) goes in a candy jar. And that’s often the last we see of it. Out of sight, out of mind, and all that.

When Tess was in preschool, and we visited just a few neighbors’ houses, we’d let her pick a piece, dump the rest and call it a night. Now she helps me sort. We talk about why the ingredients are bad, how they affect our bodies, and how there are better (and tastier) alternatives anyway. We do the same with birthday-party goody bags.

Some people rely on Great Pumpkins and Halloween Fairies and Switch Witches and other magical creatures that come in the night and swap candy for toys. But I’d rather have Tess involved in the process than avoid the conversation by letting some nighttime sprite do the deed. I want her to understand why we make the food choices we do. I want her to know that we can participate in cultural experiences like Halloween or state fairs or amusement parks without the obligatory bad food. I want her to know that the tired phrase “everything in moderation” is meaningless in a world of ingredients that shouldn’t be consumed at all.

Kids can enjoy Halloween without stuffing their faces or making it all about the candy. Their childhood won’t be ruined. They won’t turn all binge-y and weird and scarf every multicolored sugar nugget the minute they get the chance. Really. They won’t. That’s a myth.

What if Tess wants to eat something we’ve put in the toss pile? We let her. Because the surest way to get a kid to appreciate real food is to let her taste the opposite. The only chemical candy that has ever survived this test is Smarties, which I give a pass for food dye because they’re so pastel I figure it can’t be that much. And she eats, what, like a roll a year?

And what about the candy we toss? Isn’t that wasteful? Shouldn’t we just skip trick-or-treating altogether? Yes, it is. And no, we shouldn’t. Childhood is short, and I’m not going to deprive my daughter of this fun tradition with her friends. We don’t canvass the entire town or collect a huge haul. And we not only use some candy for gingerbread houses — we’ve also done candy experiments. But, in the end, if it’s a choice between trash in the can or trash in her body, well, there’s no question for me. (Which is also, BTW, why we won’t donate candy to food pantries.)

Now. Wait. Listen. Someone, somewhere, is saying some variation of this: “Sheesh. It’s Halloween. It’s one day a year. Lighten up and let the kids have their candy, already!”

But, see, that’s the problem. It’s not just one day a year. It’s Halloween night and class parties and community events and then the winter holidays and Valentine’s Day and Easter and birthday parties and swimming class and soccer games and the bank and the shoe store and restaurants with kid menus and the grandparents’ house and anyplace else kids set foot, including, of course, school. The sugar culture is so strong, the highly processed foodstuffs so epidemic, that we no longer have the luxury of viewing these things in isolation. It’s not just a few Halloween treats or one blue cupcake. It’s a crushing pile of chemical-laden pseudo food. And at some point we just have to make it stop.

And what say you? How do you handle Halloween at your house?

My kids are now getting older, so I involve them more and more in the process. Literally not a week goes by that somebody else isn’t feeding junk to my children at Bible study, homeschool co-op, sports teams, church, youth group, or at friend’s houses. We finally decided that we will allow our children to say, “Yes,” anytime they are offered junk, but we will give them a greater reward if they say, “No.” If they all choose to say, “No,” the whole family celebrates with a greater reward. We found a real-food, non-GMO candy brand that we like (Unreal candy) that I’m willing to trade out with the kids on candy-centered events like Halloween, but I still educate them how sugar lowers the immune system and point out how they argue more when their blood sugar drops.

Loved this post! We’re due with our first in March and while we have some time before worrying about trick-or-treating, I still wondered how we would handle it. I love the ideas that you use with letting your daughter enjoy the fun with friends, have a couple splurges and then toss the rest.

Brilliant way to handle the artificial stuff. I don’t think I’d go there, simply because our household is only somewhat clean eating. If I get rid of a candy I might conceivably buy them some time, I’m sending a mixed message and stressing myself out unnecessarily. At this point I do the absolute best I can, but I just have to let it go sometimes. Perpetual cortisone overload due to stressing too much about toxins is toxic, too.

I can’t see disallowing trick or treating, because it’s fun. You get to dress up in a cool costume and run around outside after your bedtime and ring peoples’ doorbells and see everyone else’s costume, etc. One of my neighbors led a “Thriller” dance in the street last year; it was great fun. So I let the kid trick or treat, but I limit how much he consumes in the end. In the past I’ve been able to just dump 3/4 of it in the night and he was no wiser, but now that he’s six, I don’t think that will fly. I’ve set aside a small container, about a 10 oz jar with a lid, and intend to say whatever you would like to keep put in this jar. Whatever does not fit is “too much.” I try to talk with him about what foods are good for us… Read more »

Thank you, everyone. So glad the post has struck a chord!

What a great post!!!
My husband and I where just talking about this. A friend invited us to go trick or treating with them. They said that we needed to bring a pillow case so we can empty the kids bucket.
WHAT!!! REALLY!!!
We decided once their buckets are full that is that..
I think it is a wonderful idea to talk to the kids about the candy and sort it. That is going to be a new tradition of ours!!