It’s the end of October and you are probably thrilled that you survived October Unprocessed. Survived? Heck you probably thrived during this month, making more food at home, watching what you eat, and realizing that not only is unprocessed food better for you but it’s also been fun! But the end of October comes one holiday where unprocessed food is hard to avoid – Halloween. Or is it? Why can’t you have a fabulous sweet filled Halloween, one that would make your kids smile with sweet happiness, while still being completely unprocessed? Make these completely unprocessed maple peanut nougat chocolate clusters and prove to everyone that you can have your treat without any tricks!

Now I’m not going to lie. These treats have scant nutritional value. There’s not hidden kale or secret quinoa in them. Sure you can pretend that the dark chocolate you enrobe the candies in is fully of anti-oxidants but you’re pretty much just trying to justify the fact that you’re eating candy. The reality is that this treat is a sugary treat, plain and simple. BUT it does follow the rules of October Unprocessed, in that every ingredient is utterly pronounceable. In fact it passes the kitchen test in that every ingredient can be made in the kitchen, including the chocolate.

In truth, after a month of eating unprocessed, you (and your family) deserve a sweet ending. Happy Halloween everyone and Happy October Unprocessed! Until next year! 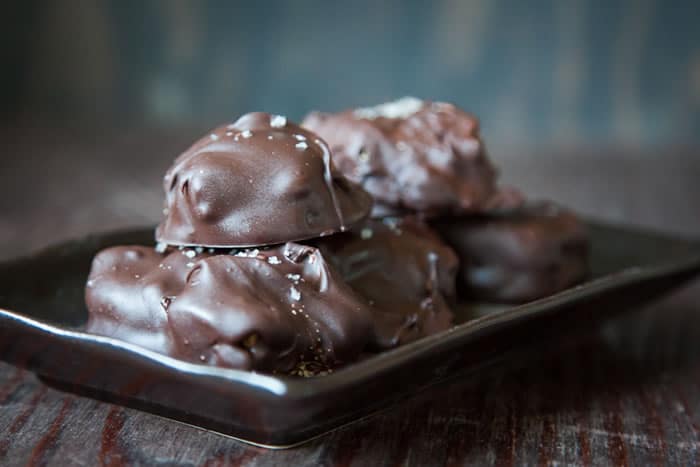 Make these completely unprocessed maple peanut nougat chocolate clusters and prove to everyone that you can have your treat without any tricks!

There are a number of relatively unprocessed and raw chocolates out there. Do your research and find the one that you are comfortable with and when in doubt, check the ingredients list and look for ones with minimal ingredients (preferably one that doesn’t have lecithin in it, an emulsifier that probably doesn’t qualify for the “unprocessed” tag).

You can use any nut butter (your own homemade kind or a quality store-bought one) and your own choice of nuts in this cluster, but I went old school with the peanuts because I thought they were a classic flavor.

I did use two whole vanilla beans in this recipe. I know vanilla beans are expensive but I was trying to keep it to whole ingredients as much as possible. If you don’t want to splurge on two beans, just substitute in 2 teaspoons of vanilla extract in place of each bean.

Finally, though it probably goes without saying, don’t use pancake syrup, but use real maple syrup. But you already knew that, right?

Irvin Lin writes the award-winning blog Eat the Love, a 2011 finalist in Saveur magazine Best Food Blog Awards in the category of Best Baking and Dessert Blogs. His blog has been recognized by numerous outlets, including PBS Food, Bon Appetit’s Daily Links, Food52 News, and Slow Food San Francisco’s newsletter. He has also had his work featured in the premiere issue of the US Masterchef magazine, Yum Food & Fun, and is a contributor to the Good Eggs blog. Irvin lives in San Francisco, a block away Dolores Park, BiRite, Delfina, and Tartine with his partner of more than 20 years, AJ. You can also find him on Twitter, Facebook, Pinterest, and Instagram.

This look amazing! However, quick question: Will the nougat still come out if you skip the peanut butter? Or something else to substitute? I’m willing to use a processed sub (eeek!) if i must. There’s a nut allergy 🙁

Oh my goodness, Irvin, these have my name all over them. I am putting this on my holiday gift giving list!

Loretta | A Finn In The Kitchen

This is more my style than those fancy truffles that seem like they must have a perfect chocolate coating. I can’t pull that off. But these look more rustic and delicious! Something I can sink my teeth into…

YUM! Is there a trick to pouring the hot maple syrup down the side of the bowl, since tipping the stand mixer isn’t doable?

Also, can you recommend a good candy thermometer?

You don’t need to tip the mixer while pouring the syrup. I just aim for the side of the bowl, right above the whipped egg whites, about 3/4 down, where the bowl starts to bend into the bottom. The syrup hits the side of the bowl and trickles down to the egg whites. Basically you want the syrup to hit the side of the bowl and not the wire whisk, as it will just whip and splatter the syrup onto the side, where it will immediately cool and harden (something I learned the hard way – it’s really tough to clean up!). As for a candy thermometer, I’ve used digital ones which are great because they are instant read, but my favorite one in my drawer is actually from Sur la Table. I like it because it has a really large dial and is easy to read (easier than the… Read more »

I kinda want to jump up and make these right now, Irvin. Thanks for giving us an amazing alternative to all the crappy-crap candy out there.

Yay! As I get older, and my taste buds get a little more “sophisticated” I find that I can’t really eat that crappy crap candy anymore. But I can easily scarf one or two of these without thinking…

Wow!! These sound amazing. Maybe there’s still time to make these before tonight.

I’ll admit they are a bit time consuming to make because you have to let them chill in the fridge… BUT totally worth it!

i had no idea that you could make nougat at home either. how very intriging and i would be interested in trying but my mixer doesn’t have a whip attachment. it is just a beatable old hand mixer – can one do it w/ that?

You should be able to do it with the beatable old hand mixer! The only problem is that it’s can be hard to juggle both the hand mixer and the hot maple syrup at the same time, as you sort of need to have the mixer on and working, as you add the maple syrup. If you’re coordinated though, here’s what you could do. Place the heatproof bowl with the egg whites on a silpat, silicon heat proof pad or a damp towel, to keep it from sliding around. Start beating the egg whites a little earlier than I suggest (maybe at 250?F) keeping an eye on the maple syrup so it doesn’t scorch or boil over. If you want to cheat a little, you can start even earlier, and add a touch of cream of tartar (technically not unprocessed, but just a pinch will do) to help keep the… Read more »

Whoa, I had no idea you could make nougat at home! I think I always just thought it was some magical combination of high fructose corn syrup and fairy dust or something. I’m way to untalented to attempt something that requires a candy thermometer, but I’ll book mark it in case I have a rush of daring one of these days 🙂

Yep! Most people don’t realize that nougat is totally doable at home. And yes commercially it is probably made with HFCS, but the nice thing about making it at home is that you can control what goes in it. I worked with maple syrup because it’s unprocessed, but most recipes at home call for white cane sugar and a little regular corn syrup. You can swap out the corn syrup for honey if you go that route.