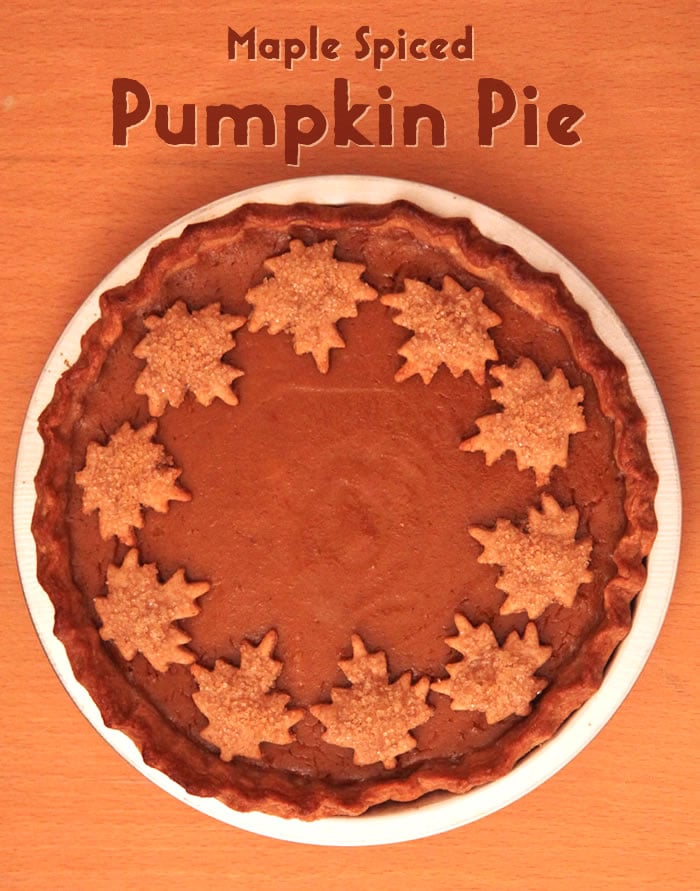 The first time I tried to make a pumpkin pie truly from scratch, as in cooking an actual pumpkin for the puree instead of using a can opener to get some of Libby’s finest, I killed my microwave.

I’m not sure how I did it. I cut up the pumpkin into slices as the recipe directed, put them in the microwave, and hit 15 minutes. I watched the pumpkin slices slowly rotate on the shiny white plate I had placed in the microwave moments earlier and then went back to doing some other kitchen prep work.

When the microwave dinged, I pushed the black button to open the door, tried to stick a fork into the slice, and noticed the pumpkin hadn’t softened at all. So I closed the door, pressed 5 more minutes and walked away, a little annoyed that the recipe would be as off in its timing as it was. The microwave dinged again, and the pumpkin slices were still hard as a rock. I did this two more times until I realized the microwave wasn’t working anymore. And that’s when I started to panic.

See, AJ and I were prepping for our annual Thanksgiving feast. We made a pledge years ago to always throw our own Thanksgiving feast after a miscommunication with a friend left us high and dry without a Thanksgiving dinner to go to. Yes, that was a dark year for us: No turkey, no mashed potatoes, no stuffing or pumpkin pie on the last Thursday of November. As we sat on my studio apartment floor, with a couple of steaks and frozen broccoli we had scrounged up from the local corner store (desperate times called for desperate measures…buying meat from a corner store) we vowed that no matter who came to our Thanksgiving dinner, whether it was just the two of us, or a grand party of all our friends, we would ALWAYS make a Thanksgiving diner, completely with roasted turkey, stuffing, mashed potatoes, green beans, sweet potato casserole, gravy, cranberry sauce, and pumpkin pie.

We’ve stuck to that plan, though the menu has shifted now and then (a few extra desserts, a vegetarian main course, a brussels sprouts & cauliflower au gratin that I tried out one year and fell in love with and have since made every year). We’ve made the feast in AJ’s apartment when his roommates were out of town, leaving us alone to try to eat the turkey with all the fixin’s (talk about leftovers), and we’ve made Thanksgiving dinner for 13 people crammed into our tiny little one bedroom apartment in San Francisco, two of whom were vegetarian (and one of whom had never actually had gravy in her entire life, something I made sure to fix at that meal).

And here we were prepping for our Thanksgiving party of eight people. And our microwave just died. And though people have been making Thanksgiving dinner without a microwave for years, we were not ready to make that leap of prepping ALL the food at the same time, hoping it would be hot enough to serve.

On top of which, I did NOT have any back up plans for a dessert. All I had was a very hard pumpkin and a ticking clock.

I was eventually able to salvage the pumpkin by roasting it in the oven (it took longer but in the end, I realized that I liked that method better anyway so it probably worked out for the best). We borrowed a microwave from a friend that lived a couple of blocks away the next day so the dinner went relatively smoothly without any more bumps.

That year, I discovered that making your own pumpkin puree is actually pretty darn easy to do. Slice the pumpkin, brush it with melted butter so it doesn’t dry out, and stick in the oven until soft. It’s about as “unprocessed” as you can get. I’ve never gone back to the canned stuff, which often times tastes metallic and pasty to me after tasting the homemade stuff.

On top of that, one of my go-to recipe for pumpkin pie is sweetened with maple syrup, one of my favorite unprocessed sweeteners, which lends a wonderful deep autumn flavor to the pie, evocative of yellow, red and orange leaves turning on the trees. Turning the crust into something “unprocessed” is pretty easy too, substituting white whole wheat flour (an albino varietal of wheat grain that has a more mellow flavor than regular red wheat flour, the predominant wheat grain, and is used to make white and whole wheat flour and that is becoming easier to find) for the regular white flour. I’ve often substituted white wheat flour for plain white flour in recipes when I want a little more texture or nuttiness, but not the same pronounced bitterness that whole wheat flour can lend to the baked good.

October Unprocessed is nearly coming to an end, but that doesn’t mean you have to immediately run out and eat a huge slice of sugary dessert. With a little adaptation, baked goods and desserts can be made with unprocessed ingredients. I am firmly in the camp that desserts aren’t supposed to be “healthy” or “low fat” as I would rather eat a satisfying smaller slice of something rich and decadent than a large slice of something “low fat” and mediocre that leaves me unfulfilled and wanting more. However, decadent and rich doesn’t necessarily have to mean processed and empty calories. Try this pumpkin pie. I doubt you switch back to the Libby’s and condensed milk version. I know I didn’t. 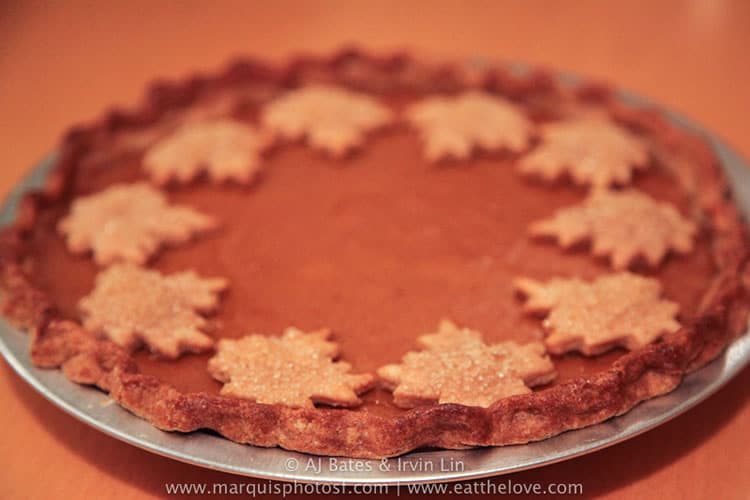 Pie crust is adapted from More Best Recipes from the Editors of Cook’s Illustrated This recipe makes two crusts. You can split it in half or you can just make two and freeze the second one for later use (frozen pie dough is awesome to have on hand).
Course Dessert
Cuisine American
Keyword maple dessert, pumpkin pie, thanksgiving desserts
Prep Time 20 minutes
Cook Time 50 minutes
Total Time 1 hour 10 minutes
Yield 12 servings
Calories 336 kcal
Author Irvin Lin

Irvin Lin writes the award-winning blog Eat the Love, a 2011 finalist in Saveur magazine Best Food Blog Awards in the category of Best Baking and Dessert Blogs. His blog has been recognized by numerous outlets, including PBS Food, Bon Appetit’s Daily Links, Food52 News, and Slow Food San Francisco’s newsletter. He has also had his work featured in the premiere issue of the US Masterchef magazine, Yum Food & Fun, and is a contributor to the Good Eggs blog. Irvin lives in San Francisco, a block away Dolores Park, BiRite, Delfina, and Tartine with his partner of more than 20 years, AJ. You can also find him on Twitter, Facebook, Pinterest, and Instagram.

How will the pie be of made the day before?

Definitely trying this with the whole wheat crust and maple syrup. I plan to substitute sweet potatoes for the pumpkin, since I use similar ingredients for both. Thanks for this awesome recipe.

So yummy! I used almond milk instead of the cream and cow’s milk because of a milk allergy but will definitely try it again as written. I served it with whipped cream from those who aren’t allergic and chopped Sahale dried cranberry/black pepper/orange zest pecans.

Ooh, how beautiful, and it sounds delicious!! I am a big fan of Irvin’s; where he leads, I will follow.

I am increasingly interested in unprocessed everything. I am super glad to find out about this and will check the other recipes out! Thanks!!

ooohhh… i love irvins (aka mr.jack honky’s) recipes!!! What a great idea ‘Unprocessed October ‘ is! Glad i jumped over. cheers kari

Definitely glad you c licked through! I haven’t had a chance to try the Irvin’s recipe yet, but looking forward to giving it a shot over Thanksgiving. 🙂

Thanks for the kudos on October Unprocessed… It was an enlightening month for many of us (self included)! Although I’m not spearheading an unprocessed November, I certainly encourage you to give it a shot on your own (or better yet, with some close, like-minded friends). Hooray for real food!