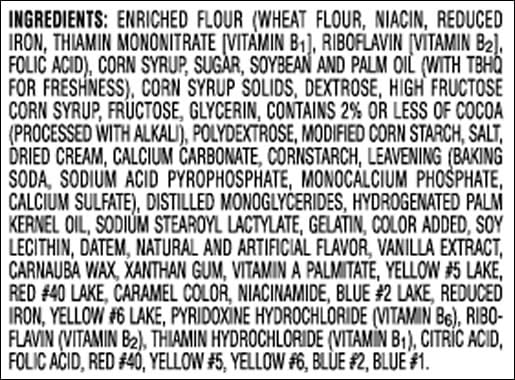 Want to know the single post powerful tool you have for making healthful food choices at the grocery store?  You probably already guessed from the picture above –it’s the ingredients list!

About 60% of people completely ignore this little gem of information, usually tucked away in small print on the back of the package.

I’m not talking about the complicated “Nutrition Facts Panel.”  I’m talking about the basic list of ingredients that’s usually just below it. This is what tells you what’s actually in the food product that you’re considering eating.*

Here’s the most important thing to know to help you decode the list: The ingredients are listed in order of predominance by weight. This means that the product contains more of the first ingredient than any other single ingredient.

So if the ingredients are “oats, honey, peanut butter, water, salt” you know that there are more oats than honey in the box (even if only by a teensy, tiny bit).  It also means there’s more honey than peanut butter.  But if you combined the honey and peanut butter, it’s possible they would actually outweigh the oats (which, in this example, may not be a big deal — but read on.)

Now take a look at what happens if the ingredient list is just a little different: “oats, honey, sugar, peanut butter, water, salt.”  Odds are good that if you combined the honey and sugar, there’d actually be more total sugar than the oats.

The conspiracy theorist in me would even go so far as to say that they are deliberately using two different types of sugar (and putting the more wholesome-sounding “honey” first) specifically because they are required to list the ingredients in order. If honey were the only sweetener in that particular product, the ingredients list would probably look more like “honey, oats, peanut butter, water, salt” — and that means people might be tipped off to the fact that sugar is the main ingredient.

But wait — there’s more!  Sometimes ingredients are made up of other ingredients, such as the “Enriched Flour” at the top of the list. At that point, they create parenthetical lists, in which the sub-ingredients are also sorted by predominance by weight.  You can see how this is a bit of a rabbit hole, and can make reading the list really hard to decipher. (The small font and lack of good punctuation don’t help, either).**

Let’s take another look at the same exact ingredients list from the image above — but this time, with the first eight ingredients highlighted: 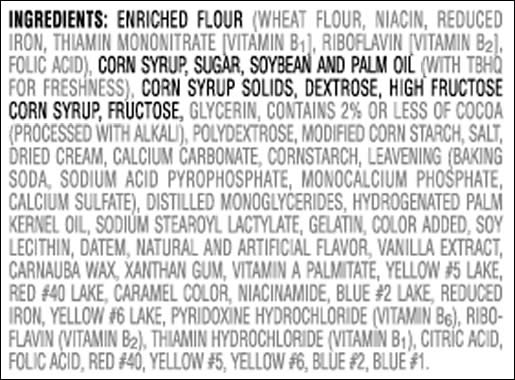 Six of those eight ingredients are sugars! If they used only one type of sugar in this product, you can bet they’d be listed before the “enriched flour.”

That also means that 98% of this food is refined flour, sugar, oil, and glycerin (with a pinch of vitamins and a preservative).

Now, let’s compare those lists above — which happen to be for a breakfast product (not made by Attune Foods) — to the full ingredient list in Attune Foods’ Uncle Sam Original cereal:

Those sure look more like real ingredients to me! (Yes, barley malt is a type of sugar, but since it’s listed last — and after salt — we can tell there’s very little of it in the cereal).

Which would you choose to start your day?

* There are some instances where they aren’t required to list all the ingredients used to make a food, particularly when it’s considered “trace” amounts. Also, alcoholic beverages (including things like margarita mix with the booze already in it) don’t usually list ingredients or nutrition facts.

** If only all sugars were required to be grouped together and counted as one ingredient! On a related note, check out the work that Center for Science in the Public Interest is doing to try to improve food labels.

What I’m Reading Now
Consumers are people, too