Jan Hoadley is the owner-operator of SlowMoneyFarm, a very small operation in northwest Alabama that is working towards being a larger — but still personal — operation in south central Kentucky. A non-traditional family operation, at this point consisting of Paul, breadwinner off the farm working hard to ensure they can pay bills; Connor, their 13-year-old Godson who joined after his mother passed away; and Jan, who grew up on a family farm in Illinois. Currently they raise poultry and rabbits, and grow herbs, peppers, and tomatoes. They focus on rare breeds, heirloom/heritage varieties, and sometimes combine them with commercial breeds.

I “met” Jan during a Twitter #foodchat (which I believe was a small part of the controversial “Food Dialogues”).  That sparked a great email conversation between us about transparency in agriculture, which prompted Jan to write this post and also this post on her blog. I also found it interesting that they’re raising rabbits for meat — which, if you’re a meat-eater who’s concerned about the environment, is worth considering. As a pescetarian, I won’t be eating rabbit anytime soon, and I’m definitely not encouraging additional meat consumption, but I do think it’s important to know and understand as many sides of the story as possible. 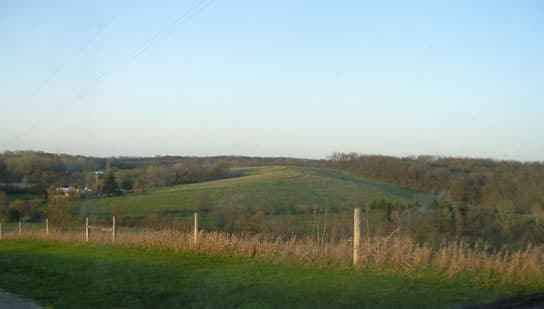 Rabbit meat is a topic that generates great emotion for some people. Some liken it to eating their dog or cat, viewing rabbits as pets only. Others see them as solely a meat animal, produced in volume, white preferred. Still others have an attachment solely from a chef’s plate.

At SlowMoneyFarm we maintain rabbits, specifically Giant Chinchillas. There will be other rare breeds added in time, but for now the Giant Chinchillas have a history. One hundred years ago they were a rabbit being developed for a dual-purpose, producing meat and fur and doing so on less expensive hay rather than a reliance on grains. Today we still embrace that diversity!

We feed pellets and hay, along with clean water. Growing rabbits get as much as they want, while mature ones get a measured amount of pellets along with hay. Like us, fat is not healthy for rabbits. Rabbit meat allows us to select harder for good traits we want to pass on, and provides a market for those animals that aren’t the best.

Rabbit meat is among the highest protein-dense meats you can get. Nutritionally, it ranks highest in protein and lowest in fat, according to a USDA circular. With 795 calories per pound, rabbit beats chicken, turkey and other lean meats for those looking to get more nutrition in a smaller serving. 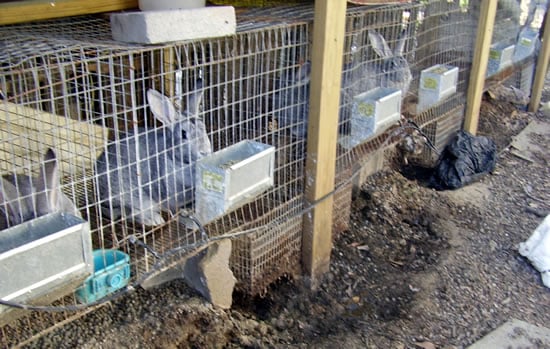 Rabbit meat is all white meat, and when raised off the ground in cages there is no contact with the ground, resulting in a cleaner raised meat. They also can be raised in relatively small areas.

There is also much misinformation about the raising of rabbits for meat. One is that they’re raised in the space of a piece of paper, with photos of animals in shipping crates. The key is those are shipping crates not living quarters! A shipping crate is akin to a child restraint seat. Rabbits without room to move get fat, and fat isn’t muscle. Muscle is where the meat is — our rabbits are selected for a wide frame which allows more muscle. 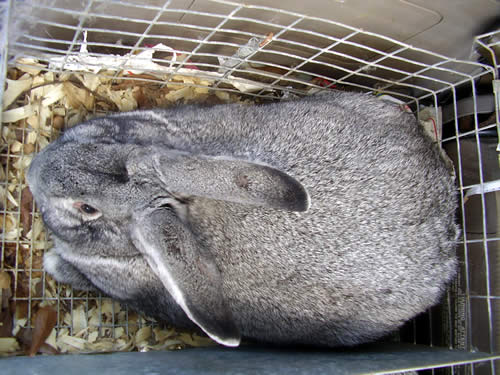 A rabbit’s skeletal system is much finer-boned than other animals, and less percentage of body weight than a cat. However, over 50% of a rabbit is muscle, and that muscle translates to an efficient meat source.

As the world’s population grows there is no more land to expand on. Farmers everywhere must make more efficient use of what we have and for that reason also rabbits make sense. Rabbits can use forages that we cannot use, converting it into meat that we can use.

Rabbit meat, for all its nutrition, does have some challenges. Many say that any chicken recipe can be used for rabbit. In my experience that is setting you up for disappointment. It’s no more similar than beef is to lamb. Rabbit is much leaner, and with that lower fat it can easily be overcooked and dried out. It excels in dishes where it’s braised — some include rabbit enchiladas, stew, or chili. Its fine fibers absorb flavors and seasoning well.

If you’re purchasing rabbit direct there is another note that many rabbit raisers know that is worth sharing. Rabbit has a reputation as being tender and from fryers (young rabbits of about 8-12 weeks), it is! Some prefer to hold rabbits a little while longer, which results in a meat that is slightly more flavorful and “chewy.”

Do be aware when purchasing at grocery outlets much of commercially-sold rabbit meat in the USA is imported from China. This is done because it’s cheaper (due to regulations) to import than buy direct. For those interested in food choices it’s worth the effort to find a place to buy direct. Still other operations will market by saying rabbit is “free of hormones” — a deceptive tactic. The fact is all living things have hormones. There are no added hormones to ANY rabbit meat raised in the USA. Rations are pretty basic!

Here at SlowMoneyFarm a bigger challenge is getting it processed, as selling meat means having a USDA inspected facility. We’ll be using a family-run small business in Kentucky, the closest one that can handle rabbit due to regulations on meat processors.

We welcome discussion from those interested in rabbit meat. We are working on being able to ship, and are eager to share good quality, clean meats with others.

Thank you for the article! As a young woman in my thirties I’ve experienced what mainstream corporations effects on the human body can do. I had to have a surgery that I should not have had to have due to foreign chemicals and free radicals in my body that sparked an overproduction of estrogen. Thank God it was not cancer, but left unattended it could have been in less than two years time. Since this journey, I’ve been challenged to seek out healthy sources of protein that have not been contaminated by large producers and markets. So this is how I have made the decision to raise giant chinchillas. Eating the plant based diet is good and I recommend it to everyone! It has served me well, but the levels of protein that are needed to keep cancer at bay, I needed an alternative source. I hope to keep learning… Read more »

So now we are going after Rabbits? After reading the blog and comments, I can’t help noticing how casually people talk about using living animals as food. Replace any reference to ‘rabbit, chicken, pig, cow’ with the word ‘human’ or ‘human baby’ and see how it sounds. Horrid. What a horrible thing to BREED any animal species for FOOD consumption. WHY aren’t we finding non-animal sources instead of perpetuating the continual USE of living beings as food. This is PREDATORY behavior and so lacking in respect for other life forms. Animals do prey on each other, Humans DO NOT NEED to. When will people start to respect ALL LIFE, develop true compassion, and CHANGE the thinking that WE NEED to EAT Animals. NO, we do not!

rabbidman
Reply to  Babs in UT

When you grow all your own food and help to educate people on how to do so you have no right to criticize anyone on a rabbit breeding site. you will be the first to break into my rabbit cages when walmarts veggies have been recalled for ecoli. i use my rabbit poop to fertilize my garden and feed them veggies from my garden this is my 2nd year. i eat the offspring too, once you eat rabbit you will realize they were put here for everyone to eat they multiply as rabbits do and are a pure non drugged or hormoned food source that after eating you realize the purity is so much better than cow pig and even chicken. Rabbits can be pets hobby and food for all they are amazing animals that failing societies turn to when times get hard being one of the most efficient animals… Read more »

This is quite fascinating. I dont know if at this point I could actually cook a rabbit but no telling how I’ll feel in a few months. I do occasionally feed my dogs raw ground rabbit but that’s different somehow.

Thanks for opening our minds to something not very mainstream.

First of all well done on all of your blog posts! They are always so interesting. About rabbit meat: in Malta rabbit is considered to be one of the healthiest meats to eat. It is low in fat and very tasty. We have a traditional rabbit stew which is simply heavenly! We serve it with traditional Maltese bread so that it is dipped in the delicious sauce. The trick is to keep the rabbit moist in wine and tomato sauce. Also, the bay leaf gives it a kick. Here is a link how to prepare it. http://www.maltabulb.com/rabbit_stew_recipe.html . Nowadays people are also experimenting cooking rabbit with chocolate. I have no idea how it’s prepared but I’ve heard it tastes lovely.

Moist cooking is definitely good! I haven’t heard of rabbit and chocolate – what a combination! The recipe looks awesome – thanks!

One still wonders if the rabbits would be better served in some sort of pasture arrangement where they can balance their own diet on wild greens? Keeping them clean off the ground (and their own feces) is certainly a good thing, but it also saves them from having to develop their own natural defenses against such threats. I know some rabbit can be aggressive so I don’t know if they’d try to hurt each other if asked to share common space. I’ve been reading Food of a Younger Land by Mark Kurlansky, in which he covers a number of not so old American dishes for squirrel and ‘possum. Just read the part where he mentioned it was considered a great honor among American Indian tribes to be offered dog as a meal. Not going there myself. It does suggest there are other things out there to eat than chicken, pork… Read more »

Jan
Reply to  Charles B

Charles, that is an option that some do, but it’s very difficult in some ways. When on the ground they are more likely to pick up coccidia and other ‘goodies’ that we’d rather they not get. It can be easily treated but if you’re raising for meat the withdrawal times and medications may not be something you want to deal with. 🙂 Rabbits certainly can be very territorial. I’ve found if a litter grows up together or are put together when young it’s not *too* difficult. Introducing adults can get dicey – they are prone to fighting and can cause some serious injuries. Good recommended starters for rabbit – rabbit enchiladas or chili. It takes seasoning well. I do plan in the future (when we get more land) to have a top nutrition forage area to graze in rotating pens, allowing for some browse while still offering protection, housing and… Read more »