Rene Lynch is a writer and editor at the Los Angeles Times,  covering both food and national news. She also writes at her blog, I Love Leftovers, and you can always find her on Twitter. 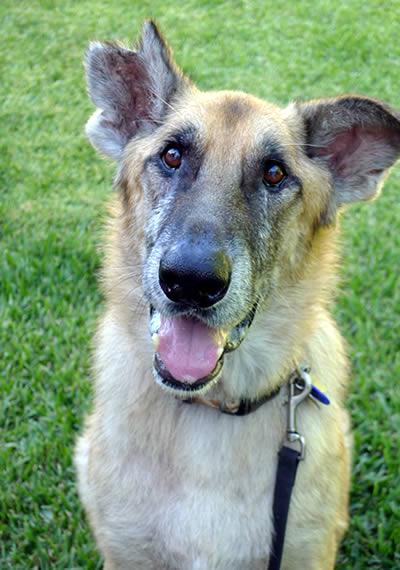 A few weeks ago, I adopted a German shepherd rescue who had been badly abused, and was suffering from a number of chronic health problems. (Since this is a food blog, I will spare you details.) The first thing the vet did was order up a new diet. I was under strict instruction to feed the struggling pup a premium non-allergenic dog food requiring a prescription, and some healthy extras like scoops of ripe avocado and canned pumpkin. But nothing else – no treats. The vet wanted to keep a tight rein on his diet in an effort to pinpoint his problems.

Fast forward to my return trip to the vet. After just 22 days, the dog’s health problems had improved 100%. Truly, night and day. Even the vet was impressed, and chalked it up to the healing properties of food.

And I was left facing an uncomfortable fact: I feed my dog better than I feed myself.

Allow me to explain. When I joined Unprocessed October last year, it helped me make lasting changes to the foods I buy and serve on a plate in my home. (I think my husband has forgotten what white bread tastes like, and diet soda is now a rare treat instead of the routine dinnertime beverage.) However, I didn’t allow October Unprocessed to permanently curb my personal – and largely secret — snacking habits. Fritos, Doritos, Cheetos…if the name ended in an “O” I’d eat it, preferably when no one was around.

As I sat in the vet’s office that morning, I realized that I would never in a million years put a bowl of Cheetos on the floor and let my dog eat that for dinner. Yet there had been plenty of occasions, I’m red-faced to admit, where I made a meal out of a bag of orange food.

In a show of solidarity with my new canine companion, I decided that if he had to go without “treats,” so would I. And that resolve has led me to honor this Unprocessed October by shunning all that junk food, once and for all, no matter what month it is.

Eventually, the vet says, we will be able to add treats into Rambo’s diet. And I’m looking forward to finding healthy ones that he’ll enjoy (like this turkey, rice, and veggie stew).

I’m also going to do the same for myself.

FYI avocado can be toxic to dogs! I’m surprised your vet didn’t tell you about it!

Rene – i love this, and i love your dog! Andrew — this month has been so great to follow! 🙂

What a great angle – bringing the doggie into it! I just met my new “nephew” today – a 9-month old rescue dog that’s part golden, cattle, and something else but net/net, he looks like an adorable fox. So sweet and luckily for my brother and sister-in-law, also healthy. Glad your doggie is doing well, and yes, Rene – stay off that stuff that ends with “o” – stay healthy and hope to see you in Santa Monica in November!

Love this! Thanks Rene! (And Andrew!)

Wonderful reading. This can apply to mothers, too. We take care of others first before ourselves. I’ve been working on that much better now that my daughters are adults.

I know exactly what you mean about feeding the animals better than we eat. My Bengal kitten Lark gets a great diet of 50% Instinct Raw frozen diet (95% meat, organs, and bone, grain free), and 50% either Instinct canned foods (also 95% meats and grain free) or Wellness grain free canned. Definitely better than I have eaten in the past!

October Unprocessed is helping me stick to the healthy diet I adopted several months ago.

Isn’t it interesting what we will do for our pets and not for ourselves? My case – we needed to curb the amount of food our cat was eating. We have just gotten a new kitty – not a year old. Our previous cat self regulated well and had dry food available to him all the time. Our current cat – at everything we put out instantly and had a rapidly expanding waist line. So we needed to cut the amount she was eating and apportion it out at certain times. Not unlike what I needed to do with my diet. So we are on a diet together. We eat modest portions of good food and few if any treats. I think she is losing faster than I am however!

So well said! It’s amazing how easy it is to slip into living by double standards.