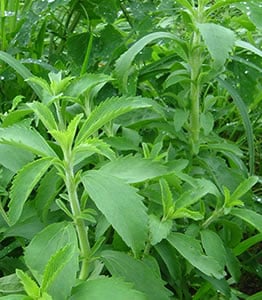 In many ways, nutrition mirrors fashion.  There are recycled trends (before hitting it big in 2003, low-carb was all the rage in the ’70s), media hype (Master Cleanse, anyone?), and up-and-comers with potential to become movers and shakers (as recently evidenced by the massive interest in all things coconut). The world of sweeteners – both natural and artificial – is particularly buzzing with activity; today’s post focuses on one of their more controversial figures – Stevia.

Stevia is a perennial shrub with sweet-tasting leaves that has been consumed by native populations in Paraguay for centuries (the plant’s leaves are dried and ground up into a powder which is then added to beverages).  In that sense, true Stevia has a lot in common with honey or maple syrup – it is a minimally processed sweetener.

Stevia has been used commercially in Japan for decades, but was banned in the USA in 1991 following a complaint by an industry group that, to this day, remains anonymous (some suspect that the makers of aspartame were behind the complaint in an attempt to dominate the alternative sweetener market).  Four years later, as a result of the Dietary Supplement Health & Education Act (DHSEA), Stevia was allowed to be sold in the United States as a supplement (rather than a food additive). It’s worth pointing out that between 1991 and 1995, manufacturers submitted various requests to overturn the ban, all of which the FDA struck down citing concerns over Stevia’s safety in some rat studies, which have since been called into question.  More recent studies have shown beneficial effects.

Fast forward to 2008.  By that time, aspartame had been around for a while and concerns about its safety and sketchy approval process had started to make the rounds.  Splenda (sucralose) had been out for a few years, but it too had been hit by some negative press. Case in point – the market was ready for another sweetener. Coca-Cola and PepsiCo, inspired by Stevia, petitioned the FDA to approve rebaudioside-A (Reb-A), an isolated extract from the plant, as a “Generally Recognized As Safe (GRAS)” food additive.  The FDA quickly granted approval.

And, so here we are.  Consumers can now choose between pure Stevia, products like Stevia in the Raw (corn-based carbohydrate dextrose + Reb-A), Coca-Cola/Cargill’s Truvia  (Reb-A + erythritol), and PepsiCo’s PureVia (Reb-A + erythritol + isomaltulose + cellulose powder + natural flavors).  Why the added elements in Stevia In The Raw, Truvia and PureVia?  Well, true Stevia – which, in powder form, looks a lot like catnip — does not taste or look like sugar, and we all know Americans want their sugar substitutes to resemble the real thing as much as possible (at least that’s what market research says).

It is important to point out that the only true natural sweetener is pure Stevia.  All other forms consist of a Stevia extract with added ingredients.

As a nutrition professional, one of my goals is to get people accustomed to lower levels of sugar in their daily life.  Although it has no impact on blood sugar levels, Stevia is 30 to 40 times sweeter than sugar, whereas Reb-A registers as approximately 300 times sweeter.  In that sense, simply replacing a high intake of sugar with an equal amount of Stevia misses the point. I would much rather people train their tastebuds to get used to less sweetness, so they can appreciate the depth of flavors in whole foods.  It takes our tastebuds three to four weeks to get used to lower levels of sweetness (and saltiness); certainly not an overnight change, but one worth making.

Additionally, it is one thing to add some true Stevia to coffee or tea, but processed foods sweetened with it (or its inspired trademarked products) are nevertheless processed foods that offer minimal nutrition.  I find it more beneficial to approach nutrition from a big picture standpoint (ie: a plant-centric, whole-food approach) rather than zoning in on specific sweeteners.

Addendum, October 22, 2011: Here’s Coca-Cola’s patent for manufacturing Reb-A, in a 40+ step chemical process. Hat tip to Bruce Bradley for finding this one!

I have chronic lyme disease.
I just read that stevia leaf extract could help destroy biofilms,
so that my antibiotics could be more effective.
Could you please suggest which brand is best.
Nutramedics was mentioned
Thanks so much,
Judi

It doesn’t contain any fillers, just pure Stevia. I find the ‘stevia’ sweeteners with fillers have a very nasty chemical taste, while this is very pleasant (and potent).

I have found that PURE-VIA packets are not as sweet as SPLENDA packets. Two and a half PURE-VIA to one SPLENDA.

100% agree with you that it’s better to simply reduce the amount of sweeteners in general rather than just replace them with something like stevia. I think the key problem with stevia is still not well researched. We did an article on stevia recently and looked at some of the available research http://rejuvenatedforlife.com/stevia-safety-healthy-sweetener-or-hidden-nasty/ and it really also depends on what your specific situation is.

I prefer a 100% Pure Stevia Extract with no other ingredients. Reb-A must be over 97%. Then it has no bitter aftertaste. It is a little more expensive but is worth it.