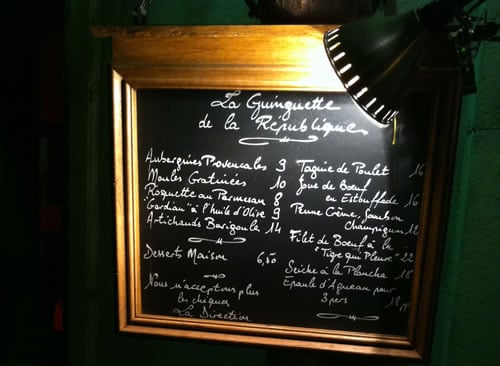 Matty and I just returned from a wonderful week in France, celebrating our first anniversary and enjoying some much-needed R&R. I decided not to blog much about the experience while there (and to avoid Twitter almost entirely), partly because I was on vacation, and partly because it felt exceedingly rude and awkward to be whipping out the camera and taking pictures of my food (something most of us have no qualms about doing here in the States!).

We spent the first few days in Paris with our friend Piper, an amazing photographer, host, and tour guide, then took the train down to Montpellier. From there we rented a car and drove to the charming and romantic, 7oo-year-old walled city of Aigues-Mortes (thanks for the recommendation, Mike!).

Naturally, we explored some of the wonderful gastronomy that France has to offer, from fine dining to the best falafel I’ve ever had (really) to the requisite Nutella crêpes on the street.* The food is incredibly rich across the board, but everywhere I look people are fit and trim – at least compared to the U.S.  I’m not the first to take notice, of course, as it actually has a name: The French Paradox.

This phrase was first used about twenty years ago, and it primarily refers to the fact that the rates of heart disease are lower in France than the U.S., even though the diet is high in saturated fats. Indeed, everywhere we go there are tons of full-fat cheese and butter (oh, the butter!). According to Wikipedia, the French consume about four times as much butter as we do, 60 percent more cheese, and about three times the pork.

If you Google “French Paradox” you’ll come up with a variety of explanations. Some think it’s the resveratrol in the wine. Some think it’s three meals a day with virtually no snacking in between. I doubt it’s the reseveratrol (the quantities are too low), and you probably already know my feelings about eating less food, more often.  Here are my theories as to what’s going on.

Paris reminds me of New York in that there’s a fantastic subway system and the streets are always bustling with people walking with deliberate intention. The streets are also uneven – since they’re hundreds of years old – which requires a bit more agility to get around.  (Also helping the parallel: People in New York are doing better than the rest of the U.S.).  Even while it was snowing last week, the streets were filled with people navigating the slippery, slushy streets.

Gas is also expensive – about $8 a gallon – and taxis aren’t cheap, either.  (One short, seven  kilometer cab ride cost us about 25€, or $33).  Both are great incentives to use your feet instead of your wheels.

Meals are slower and smaller.

When we did eat, meals were at a much slower pace, often with multiple courses of small portions.  This, of course, gives you more time to enjoy your food, taking pleasure in what you’re eating.  Perhaps more importantly, it gives more time for fullness signals to travel from your stomach to your brain (there’s generally about a twenty minute delay, so eating slower allows this process time to happen before you’re totally stuffed).

The food is less processed.

Sure, you can find processed food in France, but it’s the exception, not the rule. Evidence is mounting that ultra-processing is a likely contributor to obesity. Once again, fresh, whole foods tend to be better for us overall.  Even Weight Watchers recently revamped their points system to incorporate this newfound understanding!

People don’t drink 64-ounce Big Gulps in France – it just doesn’t happen. Soda is a treat, not something to be guzzled with every meal. It also tends to come in much smaller bottles. Sodas are significantly more expensive here, too – a great deterrent. One restaurant on our trip – not a particularly fancy or expensive place – charged 8€ for a Coke.  That’s an $11 Coke!

Most juices that I saw for sale were actual, bona fide fruit juices — not juice-flavored sugar water — and again, in much smaller bottles.

Weight is a bigger factor than saturated fat intake.

This is the big one, I think. As the stunt-pulling, twinkie-eating nutrition professor (sigh) recently demonstrated, if you eat nothing but junk food – but still lose weight by keeping your calories down – your cholesterol levels will go down, too.  I’m not a fan of his experiment since it could be easily misinterpreted (here’s a great article on Civil Eats about that; well worth the read), but the bottom line is that when you lose that excess 30 pounds, your health will improve across the board.

I’m not saying that if you’re skinny you can eat anything you want… but it sure as heck helps.

This is the one where I’m really not convinced that the French diet is superior. There’s a huge amount of white bread (I have yet to see any 100% whole grain breads here, though I’m sure they exist) and high-fat, rich cheeses  (and let’s not forget the butter!) — all of which are low in fiber. But when we want a salad? We’d end up with a plate of romaine lettuce doused in creamy dressing. Maybe they think that’s what we Americans wanted, but it sure was hard to find much roughage in our meals.  Considering all of the benefits of fiber, I’m a bit stumped as to how anybody in this country manages to stay regular.

What happens from 6pm to 8pm every night?

I’m stumped on this one, so if you know the answer please help me out. Shops and businesses generally close around 5:30 or 6pm, yet even an 8pm dinner reservation is fairly early.  What are people doing for those hours in the evening before dinner? Naptime? Facebook?

All this to say…

There’s a lot to be learned from the way the French eat. The biggest difference, beyond all the measurable criteria, is the relationship the French have with food.

Food is something wonderful in France, something important. In the States, food is something that we have to deal with to survive. The need to eat gets in the way of our busy lives, so we eat standing in the kitchen, we eat over the keyboard, and we eat in front of the television.

The French, instead, have an hour and a half lunch. The first hour is spent enjoying several small courses, and the rest of the time is spent drinking coffee and socializing.

Food is respected there, too. Nearly everywhere we went the quality and taste of the food was outstanding. At the Montpellier train station, for example, we purchased two sandwiches to go from a small pastry counter.  They were made fresh to order, not like here, where it would be a pre-made sandwich, pulled out of the glass case and tossed into a 45-second-super-fast toasting oven.

Of course, the culture of work is different in France, too, and that enables much of what I’m talking about. Shops are open for a few hours in the morning, closed for a long lunch, and then open again in the afternoon for a few hours.

There’s not much of a 24/7 attitude here, so everything is slower.  It reduces stress.  It leaves time to savor, to digest, and enjoy.

* Culinary highlight of the trip:  Afaria.  The food was creative yet unpretentious, and downright heavenly. If you’re in Paris, don’t miss this friendly, neighborhood gem!