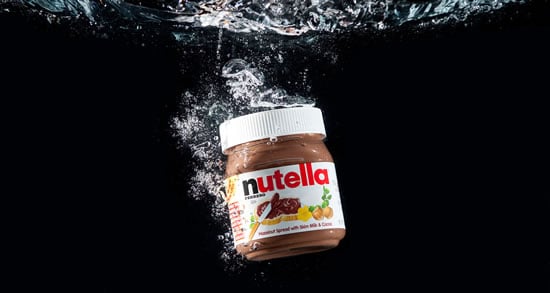 My friend Caroline, an attorney, recently brought to my attention a lawsuit that’s against Nutella (well, more accurately, against Ferrero, the makers of Nutella.  They also make Ferrero Rocher Chocolates, Kinder Chocolates, and Tic Tacs). Here’s the full complaint.

Caroline thinks the lawsuit is frivolous, and if you read some commentary on it around the ‘net, you’ll see that a lot of other folks think it’s frivolous, too.

But before I get into that, let me take a step back. Last October I attended the BlogHer Food conference. One of the sponsors was Nutella, and — full disclosure — the “goody bag” that I took home included a free jar. A few weeks later, I received an email from a marketing company that represents the Nutella brand.

They touted the Build Your Own Breakfast gimmick tool on the Nutella website, which is “an interactive exercise that lets consumers experiment with various breakfast combinations and compare basic nutrient values.”  Presumably, Nutella thinks their product should be a part of that breakfast.

This wasn’t an email blast; it was a hand-crafted message sent from the contact form on my site. They asked if I would be interested in collaborating on any projects with them.

Although I think Nutella is a delicious treat which I may enjoy on occasion, I strongly disagree with Nutella’s encouragement of including your product in an everyday breakfast. As I’m sure you’re aware, the first ingredient in your product is sugar, followed second by oil.

If Nutella were made only of Hazelnuts (as the first ingredient), and a low-sugar chocolate (as the second ingredient), that might be a different story.  But as it stands now, the product, in my opinion, is candy — and should not be considered a healthful food nor should it be encouraged as part of a “balanced breakfast.”

See, here’s the thing. Food companies spend billions and billions of dollars advertising their products, which, of course, they have the right to do.  But when you look at the advertising, it’s often misleading (at best) and can be downright lies (at worst).

I’ve said before that personal (and parental) responsibility is absolutely important — critical, even — but that can’t possibly be the end of the story. People need to be empowered with both tools and knowledge to be able to take responsibility. There’s an enormous conflict of interest when the manufacturers of “junk food” are the ones supplying those tools and knowledge. There needs to be a level playing field, and right now the odds are tipped far, far away from the consumer.

My belief is that legislation and regulation isn’t working well enough to change the food/business landscape. Other consumers agree, and they’re turning to the only other option available to them: Lawsuits.

If that’s how things have to get done in America, then so be it.  The health and the future of our nation is at stake, and that’s anything but frivolous.

I used to work for the company it’s completely true it is not good for you at all.let me explain how this process is and how their standards are very low I used to be in the hazelnut department first thing first hazelnuts come into big large bags that are from other countries hot countries when they come into the hazelnut dept its filled with mold lots of mold with strange insects that some staff don’t even know what it is? It’s transfers into the oven temperatures has to be very hot to kill any mold and insects but many times the ovens are not working properly hazelnuts go through our line while we sort the bad ones out the problem is when the ovens don’t work and the product goes to us.we can’t stand the smell that goes through I have seen and experience the staff to be gravely… Read more »

The day someone successfully sues the Fools who Decide what is Allowed on those labels is the day I start cheering.

Meanwhile, I’ll stick to things without labels, or with fewer than five recognizable, specific ingredients. “Spices” is not specific.

Nutella just settled! $3 Million ain’t much, but it’s an admission of guilt — which is worth far more.

Anyone who purchased Nutella between August 1, 2009 and January 23, 2012 may be eligible to receive a payment from the class action settlement.

What are the ingredients in a jar of Nutella in Europe? I’ve heard they’re quite different than the Nutella we get here in the states.

And because it’s normal in Europe that makes it “good”? I wouldn’t use Europe as the benchmark for anything. That’s just plain silly.

Haven’t tasted Nutella before (think I’m the only one on the planet!) but think that since labels have been on food for quite a long time listing ingredients, people should read and judge. Do we really need more laws for something we should be able to decide for ourselves?

I saw a Nutella commercial the other day and I was dismayed that they could promote it as a breakfast choice. Nutella – I love you, I keep you on my shelf for a quick and easy treat, but my goodness, you are essentially cake frosting.

I don’t like that lawsuits are the answer, but I do wish that we could stop deceptive commercials like that. Of course, I’m not qualified to judge whether a toaster tart is any better for breakfast than a slice of toast with Nutella and I think that is where the problem lies. We have a hard time admitting the nutritional vacuum of many American breakfast foods.