Home » Strategies » What’s in a gram?

By Andrew in Strategies
Published on August 5, 2010 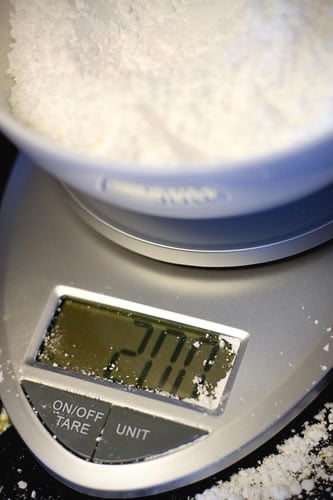 For those of us in the United States, grams are not as common a unit measurement as, say, ounces or pounds.

Food labels frequently list the total amount in grams — and grams are always the unit of measurement on nutrition labels.

I think it’s helpful to have a tangible sense of what you’re looking at on those labels, so that grams aren’t just an abstract, meaningless number.

Simply put, a gram is a unit of mass.  Get 1,000 grams together and you’ve got a kilogram, which is right around 2.2 pounds.  Divide a pound by sixteen and you get one ounce, which weighs a little over 28 grams.*

That knowledge might give you pause when you pick up that twelve-ounce can of Coca-Cola:  It contains 40 grams of sugar, or a whopping 10 teaspoons’ worth.

Or how about this:  You are deciding between two types of crackers at the store.  The first says that one serving of eight crackers weighs 40 grams.  Looking at the nutrition information, you see that (among other things) those crackers contain 1 gram of fat, 4 grams of protein, and 2 grams of fiber.

But then you pick up the second box of crackers, and notice that one serving is also listed as eight crackers, but those crackers weigh 70 grams.  Curiously, though, they contain the same amount of protein and fiber as the first box.  Since these crackers weigh more per serving, you know that they’ve got something else in each serving — and most likely many more calories.

If you keep a keen eye on those grams, you’ll  have a better sense of what you’re really eating — a useful skill for both your belly and your budget.

* I’m using the terms mass and weight interchangeably, since I assume that most of your snacking will be done right here on Earth.