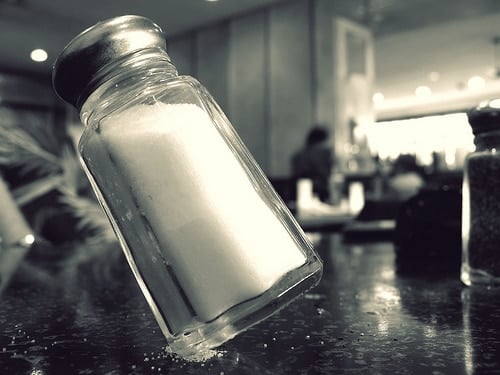 If you’ve been following my restaurant menu reviews recently, you’ve probably noticed that I’ve been harping on the extreme amount of sodium in many of the foods.

That’s led a few people to ask me, “What’s the big deal?”

The recommended upper intake limit of sodium is about 2,400mg a day (which is the equivalent of about 1 teaspoon of table salt).  For people with already-high blood pressure, the recommended limit is 1,500mg a day.

In contrast, most Americans consume about 4,000mg a day.  77% of that comes from foods eaten outside the home, either in prepackaged foods or at restaurants.

High intake of sodium increases blood pressure, which, over time, will lead to an increased risk of heart disease, heart attack, and stroke.

There are other problems likely associated with high salt intake, too.  It causes the body to excrete more calcium, which may lead to osteoporosis and the formation of kidney stones.  It impairs lung function and worsens asthma symptoms.  It may increase the rate of stomach ulcers (due to increased rates of infection with Helicobacter pylori).  It may also increase rates of stomach cancer.

In one sodium factsheet from the Center for Science in the Public Interest (PDF), they go so far as to call sodium “perhaps the deadliest ingredient in the food supply.”

About 65 million American adults have high blood pressure — and we collectively spend about $15 billion a year on blood-pressure-lowering medications.

Reducing sodium consumption by half would save an estimated 150,000 lives per year, and would reduce medical care and other costs by roughly $1.5 trillion over 20 years.

Another issue with salty foods is that they increase thirst, which of course leads people to drink more.  If you’re drinking water, that’s no big deal.  But if you are drinking soda, you’ll likely drink more soda, which means your sugar (and therefore caloric) intake increases as well… so it can lead to weight gain, increased risk of diabetes, and on and on.

Another question I was asked recently was, “Can’t you just drink more water?”

I’m still trying to find the answer to that question — I’m not yet sure if that would be sufficient.  (I wonder about increased strain on the kidneys?) Can anybody point me to the answer to this question?

Facts in this post are from CSPI’s report Salt: The Forgotten Killer (PDF).  Also check out all their sodium info.

Sodium leads to water retention, a deadly factor for people with congestive heart failure. So in those cases, more water is NOT good. Less sodium and strict water restrictions to avoid fluid build up is the rule of the day. If sodium doesn’t outright kill, it will make any CHF patient’s breathing VERY difficult and them, by extension, uncomfortable.