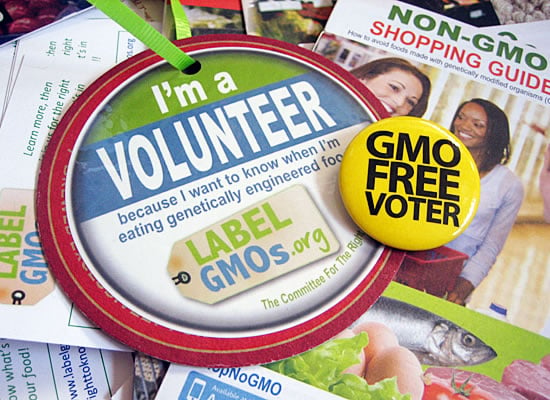 I was standing with my clipboard at the farmers market when she walked by.

“Would you like to sign an initiative to get labeling for genetically modified food on the California ballot in November?” I said.

“Don’t you want to know what’s in your food?” I asked.

“We don’t need to know everything.”

I paused, in holy crap mode.

“They tell us too much already,” she announced.

I could see her reasoning-impaired mind was made up, and like they told us in signature-gathering training, when someone is not going to budge, just move on. So like a good volunteer, I let her go.

We don’t need to know everything? Sheesh, lady, since when is a measly sentence fragment that says either “Genetically engineered” or “May be partially produced with genetic engineering” everything? It’s a few syllables and a splash of ink. They have to print the labels anyway. It’s not like I’m asking these food companies to give up their precious high-fructose corn syrup or anything. What about the labeling of tree nuts? People who go into anaphylactic shock from peanuts don’t need to know everything?

Lady, do you even know what a GMO is? A Genetically Modified Organism is when a crop’s DNA is artificially manipulated by inserting genes from other plants, animals, viruses or bacteria into it so it can withstand large doses of pesticides and herbicides. These gene sequences don’t occur in nature, and GMO crops have never been proven safe to eat.  Did you know that GMO corn is engineered to produce its own pesticide—so if a bug bites it, its stomach will explode and die? Lady, if you want to eat bug-busting bacteria bathed in toxins, knock yourself out. But let me pick my own poison.

Lady, did you know that all these pesticides are polluting our food, water and air, and the FDA has never even done any long-term safety testing on these experimental crops? Well, the very first peer-reviewed, long-term animal study just came out linking GMO corn to mammary tumors, kidney and liver damage and other serious illnesses. Monsanto, the largest maker of GMO seeds and pesticides, also made Agent Orange, DDT—and for years, covered up the dangers of PCBs—another one of their greatest hits. So why should we entrust our health and planet to these poison profiteers who are raking in billions? How can we track the health effects of all the GMO soy, corn and canola we’re eating if we don’t know we’re eating it? Don’t you think they owe it to us guinea pigs to tell us we’re being used as subjects? Hello? Am I still in America or did I accidentally stray into Corruptistan?

Lady, if you can see Russia from your house like some people, squint real hard and you’ll see that they’ve got GMO labeling on their food. China too. In fact, nearly 50 countries demand it. American companies like Coke, Pepsi, Nestle and Kellogg are required to label genetically engineered food in all of those countries, but nope, not here in the good ole U.S. of A. What are they trying to hide? Are they banking on all of us being just like you? Well guess what, lady. It turns out about 90% of us aren’t like you. We’re nothing like you. We want to know what’s in our food!

Yes, lady, the alarm has sounded, and it’s called Prop 37 – the California Right to Know Genetically Engineered Food Act. Is it any surprise that those same American corporations have poured millions of dollars into defeating it? But that won’t stop us because this is about ordinary Americans standing up to the biotech and pesticide industry and asserting our basic rights as citizens and consumers. And since the FDA doesn’t require GMO labeling, it’s time for someone else to come along and get the job done this November. Because whether you’re a Democrat, Republican, Independent, Libertarian, Tea Partier, Green or Whig, we have a right to know what’s in our food. So thanks, FDA and USDA, but California can take it from here.

Lady, it was nice chatting at you. And don’t forget to vote Yes on Prop 37! 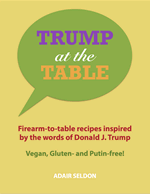 Adair Seldon is a humorist and clean-food advocate who has parlayed two of her greatest pastimes, overthinking and overeating, into the blog, Lentil Breakdown. She is also an award-winning advertising copywriter and creative who works with major brands at her company Copy Farm.

Adair is the author of Trump at the Table, a hilarious eCookbook that features healthy recipes based on Donald Trump quotes (16 tasteless remarks, 16 tasty recipes). You can follow Adair on Facebook, Twitter, and Instagram.

Ugh, we had the same initiative in Washington. I proudly voted “no.” I like the idea of having more information about food before I decide to buy it, but I don’t think it should be forced by the government. If you don’t want to buy GMO, then just don’t buy anything that doesn’t say it’s not GMO. Why should there be an added burden to GMO food producers because some people don’t want to eat GMO? It’s simply that you want to punish producers of GMO food because you think it’s wrong. Everyone has the right to their own opinion regarding the food they eat, both people who are and aren’t OK with GMO. Until the government gets involved and starts regulating it, that is.

Haha ‘punish’, that word’s a little light compared to what I would want. Destroy is more like it! ALL products should be labeled if they are a product of a GMO. That way the people who are reading labels can identify. I know the system wouldn’t be perfect because these greedy, untrustworthy companies would find ways around it and cheat to make a buck. Wake up people, look at statistics, do your research.

“Did you know that GMO corn is engineered to produce its own pesticide—so if a bug bites it, its stomach will explode and die?” – I laughed at this..so ill educated. These are called Plant incorporated protectants. It allows plants to produce molecules that fight off pests. These molecules have high specificity, which means that the molecules can only affect certain pests. Again..explode and die?? HAHAHA.

I commend you for attempting to inform the public, but you should really get the facts straight before spreading misinformation. Try to do your own research by looking at peer reviewed sources for once.

You do realise, your first paragraph merely restates how modified gene sequences are _not_ found in nature, but are artifically introduced into the genome of the modified plant.

Maybe I’m in the minority here but I actually found the tone of this post to be offensive and insulting. And anyway, while more information can be a good thing, it is only good if the increase in information is actually useful and meaningful. As someone pointed out, there are a ton of exceptions to Prop 37 which may render it less useful. There is also the danger of a proliferation of CYA warning signs which ultimately are not very helpful. And, the blog post didn’t address a serious problem with Prop 37, which is that any consumer can bring an action against any retailer (including a small grocer) without having to prove damages. This could be a huge strain on small businesses who may face lawsuits which could very well be without merit, but will be forced to settle to make the problem go away. I’m not necessarily voting… Read more »

^^^ At this point ANY labeling will HELP us!!! Unfortunately there will be some kind of problems with 37 BUT the message we will send is HUGE!! There are so many unaware people, people who have no idea what a GMO is. I’m terrified of what I’ve been feeding my children! Our public needs to know!

Jen, it’s not necessarily true that ANY labeling will help. If there are ANY exceptions, it will make people stop paying attention, assuming everything without a label is safe. The more the government “protects” us, the more we stop watching out for ourselves. And do you really think the government will watch out for you and your family better than you would?

Also, making companies label products “GMO” doesn’t teach them what GMO is. It would just be another meaningless phrase on a label to them. That’s why it’s good for individuals to keep communicating the importance to others. If the market demanded information – or complete non-use of genetic modification for that matter – then it would happen.

I would want to suggest to this lady that if she has any digestive problems right now, that they could well be connected to the processed gmo foods she if probably eating now, and ask her whether she would like to develop some mammary tumors, which she is encouraging, by eating processed gmo foods.

I think the cost issue is just a red herring set up by the gm community to take the focus off of the real issues. As you say, buying stickers that say ‘contains gmos’, or adding it to the labels is not that big of a deal. Nobody is asking them to reformulate their products.

Thanks for your work getting signatures for the cause, and for your post!

What a title 🙂 And so Adair! You’ve got style and the goods to back it up, girl. Excellent post!

so well written! love this!