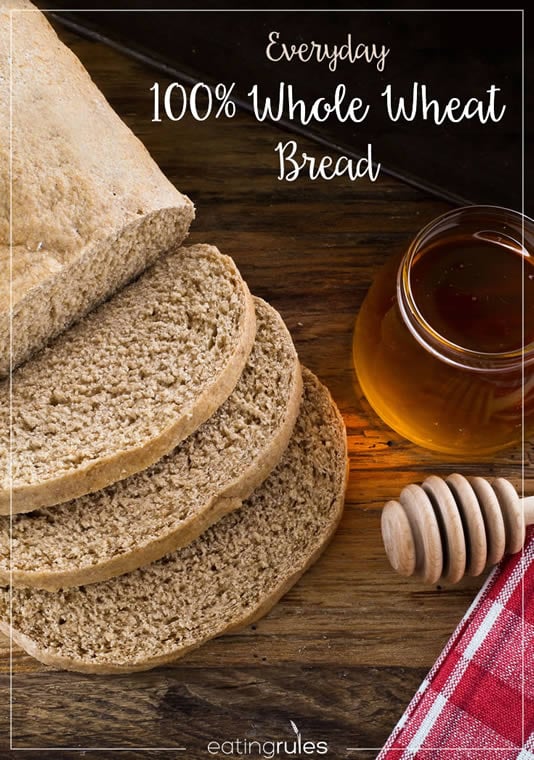 This Everyday 100% Whole Wheat Bread calls for coconut oil, which conventional wisdom says is high in saturated fat and therefore should be avoided. When I expressed that concern, she pointed out that there is increasing evidence that coconut oil has many redeeming health properties: It has high antimicrobial properties, is quickly used for energy, and contributes to the health of the immune system. She suggested reviewing the information and links at www.coconutoil.com.

Fast forward a couple of years, and Andy Bellatti and I gave unrefined Coconut Oil a high ranking on our Cooking Oil Comparison Chart. It’s especially good for high-heat cooking, since it has a much higher smoke point than most other cooking oils.

If you don’t want to use coconut oil, this recipe can also be made with butter (choose organic from grass-fed cows).  Or, you can omit the fat altogether and this 100% whole wheat bread will still turn out great. It’s very simple to put together and you can have fresh bread on the table in just two hours (most of that time is inactive, letting the dough rise).

For a vegan option (without honey), try this 100% Whole Wheat Bread recipe instead.  (And in case you’re wondering, Carrie shared this recipe before she went grain-free — for those of you who still enjoy grains, this recipe is well worth a try!) 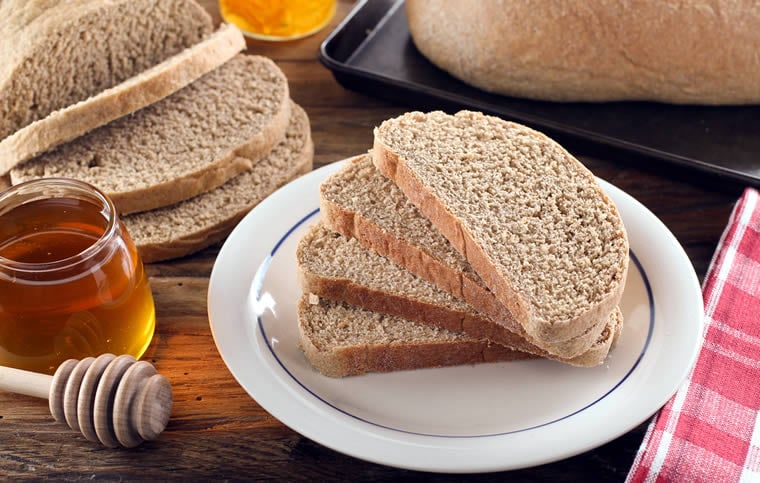 If you've been intimidated by homemade bread then this is the recipe for you. It's very simple to put together and you can have fresh bread on the table in just two hours. Makes 2 loaves. 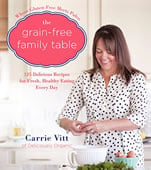 Carrie Vitt is a Nutritional Therapy Practitioner, the author of the successful cooking blog Deliciously Organic, and has authored two cookbooks: Deliciously Organic and The Grain-Free Family Table. After struggling with health issues for years, she turned to an unprocessed, grain-free diet and has been able to overcome Hashimoto’s disease, chronic migraines, IBS, and eczema. You can also find Carrie on Facebook, Instagram, and Pinterest.
2.2K shares
Easy Egg Drop Soup
We have a theme song!

been making this every week for the past few months. It really is good. She has been on this vegan kick but this was healthy enough to get her to eat it. I could replace the honey with agave nectar but na.

Hi! Thanks for sharing.. I just made this bread and it tastes amazing. It didn’t rise much tough. I mean, it rose when left to rise, but when baked it went down again. =( I don’t know what happened. The only thing I could think of is to mill the wheat more. Could you show me a picture of the bread? Mine are at http://gabhousewife.blogspot.mx/2012/10/100-homemade-whole-wheat-bread.html

I made this bread last night and it was delicious! I halved the recipe and baked in a bread loaf glass pan. My husband who doesn’t usually eat as healthfully as I do (I’m working on him!) even loved the bread. I’ll be making this bread for the next month and beyond the challenge.

I made this today using White Whole Wheat Flour (made from spring white wheat instead of red wheat) and put it in loaf pans. It tastes amazing! I’m hoping it holds up well for the next few days for sandwiches.

You really have to be careful with the kneading…it can make it tough , I can tell when I am going to have a great loaf….it feels soft like a new born babies behind….

Made this today and it’s so delicious! Really chewy. I may bake it a little longer next time though because it came out a little underdone after 25.

I made it today and I simply love it!

Hey would this work for freshly white hard wheat? im new to fresh ground grains and looking for recipes that will work with it. Thanks so muh, email me if you can 🙂

I made this bread and although my husband said it was good, I felt it was lacking “something.” I thought it was bland. It needed some oomph! Suggestions?

Not that it would change the taste, but can this be made in a loaf pan instead of on a cookie sheet?

You can add your favorite seeds. I use flax for a change. We find the bread is great with butter and jelly , what more could you want : )
….at least Rosie ( dog) thinks so !!!!