Home » Happening Now » Bee Safe! A Tale of Tainted Honey & How to Avoid It 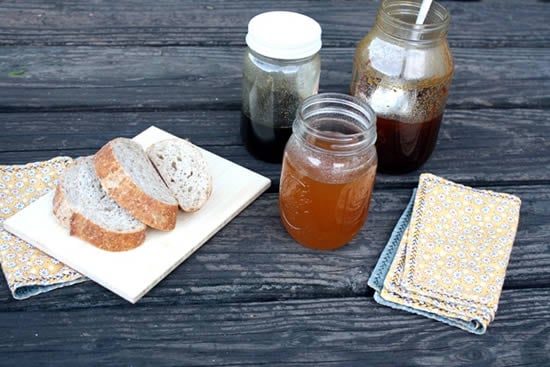 Eighty percent of the food we eat relies on pollination. One of the most glorious treats we consume comes straight from the pollinators themselves: Honey. While the problem of colony collapse disorder has received widespread attention, not many people know about the toxic result of this problem in our food supply.

In recent years, studies have reported the rapid collapse of honey bee colonies. What’s killing the bees is as widely debated as the methods used in attempts to fix the problem. Bee keepers’ methods range from organic to pharmaceutical, and it’s the latter that’s cause for food safety alarm.

In China, beekeepers are known to use a quick cure to fight bee disease through the use of ciprofloxacin, also known as Cipro. This potent antibiotic was used to treat anthrax in 2001 — it’s scary stuff. The FDA does not allow the use of this antibiotic in American food because there’s a real threat that it will cause bacterial resistance. Chinese honey has also been found to contain another harsh antibiotic, chloramphenicol, which has been linked to DNA damage and carcinogenicity.

According to Rowan Jacobsen’s Fruitless Fall, in 2006, “a random sample of Chinese honey, taken from a Florida honey packer . . . found 48 parts per billion ciprofloxacin in it.” He also writes that “an estimated 70 percent of Chinese beekeepers use antibiotics.”

There are additional reports that have found Chinese honey to contain heavy metals, like lead, from storage containers.

Furthermore, Chinese honey, when packaged for sale, rarely contains much of that thick syrup produced by bees. Instead, any number of products including corn syrup, rice, or barely products are combined to create “funny honey” — far cheaper to produce than honey. It looks and slightly tastes like the golden syrup — but there’s not much honey to it.

But that’s honey in China, right? What’s that have to do with you and me?

Sadly, according to a Food Safety News report, America’s top honey packers are using tainted Chinese honey, despite a ban, by “laundering” the honey. Chinese honey is shipped to other countries like Thailand or India, relabeled, and imported to America. The FDA is largely ignoring the problem.

So, that bottle of honey you just purchased from your big chain supermarket? There’s no way of knowing where that honey came from — and packagers are not required to list its country of origin. You won’t find a “made in China” stamp.

From a consumer standpoint, there’s almost no way to know whether your honey is safe. Almost. The one surefire way to ensure that you’re getting 100% pure, contaminant-free honey is to shop locally. According to a Grist.org report, “four or five of the 12 major U.S. honey packers are responsible for most of the illegal purchases.” Find a local beekeeper and buy directly from them.

In Illinois, beekeepers joined forces to improve legislation making it easier for small-scale producers to sell their honey to the public. At many local farmers markets across the country, you’re likely to find local honey for sale.

Of course, this only solves part of the problem. In the U.S., 65% of our honey consumption comes from sweetened, processed foods like cereals and breads. If you want to be certain your honey mustard, your bread, or your breakfast don’t contain “funny honey,” you’re better off making them from scratch.

Hungry for honey? Here are some great, unprocessed recipe ideas:

Amber Stott is the founder of the nonprofit Food Literacy Center, whose mission is to inspire kids to eat their vegetables. They teach low-income elementary school children cooking and nutrition to improve our health, environment, and economy. Amber was named a Food Revolution Hero by the Jamie Oliver Food Foundation, and of course grows her own groceries at home in Sacramento, California. Learn more about the work the Food Literacy Center is doing on Instagram, Twitter, and Facebook.

You can find the Bar Codes of an item that was bought. This site has a list of countries with the first 3 numbers, that are at the beginning of the bar code,: https://www.snopes.com/fact-check/country-home/

I have some oil that accidentally got mixed in some of our honey. Is there anything we can use it for?

Excellent article. Only buy honey from local beekeepers. Better yet, raise your own! We can’t have too many beekeepers.