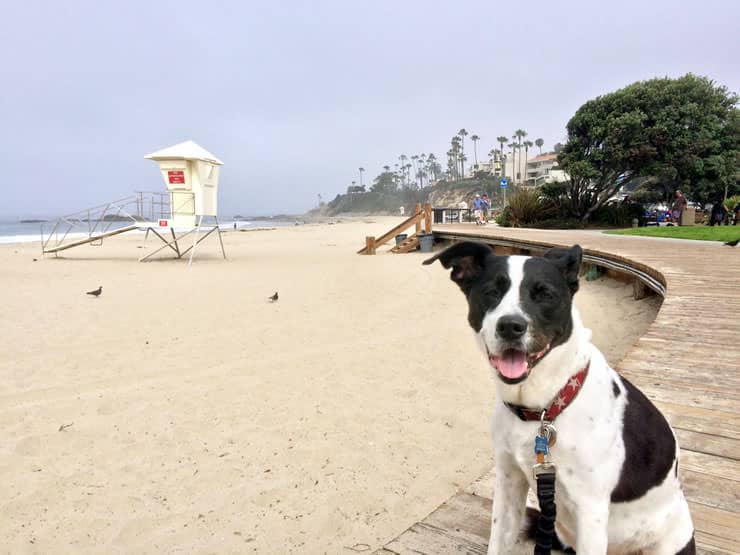 Just chilling on the boardwalk at Laguna Beach

It’s an unsettling feeling, when you realize that people have stopped asking about your dog because they’re afraid she’s dead. Then again, considering that in February we thought Molly only had one or two months to live, it’s not all that surprising.

So let me give you the good news right up front: Molly’s alive, and thriving. I’ve taken to calling her The Miracle Dog.

A quick recap: Back in February, Molly was diagnosed with a gastrinoma, which is a rare and aggressive neuroendocrine cancer. It started on her pancreas, and spread to her liver. We discovered it while she was in surgery to have gravel removed from her stomach (long story). After she recovered from the surgery (and severe anemia from an ulcer, requiring a blood transfusion), she started to rebound and regain her strength. Even so, Dr. Chretin, our oncologist, estimated that without treatment for the cancer, she might only be with us another month or two. 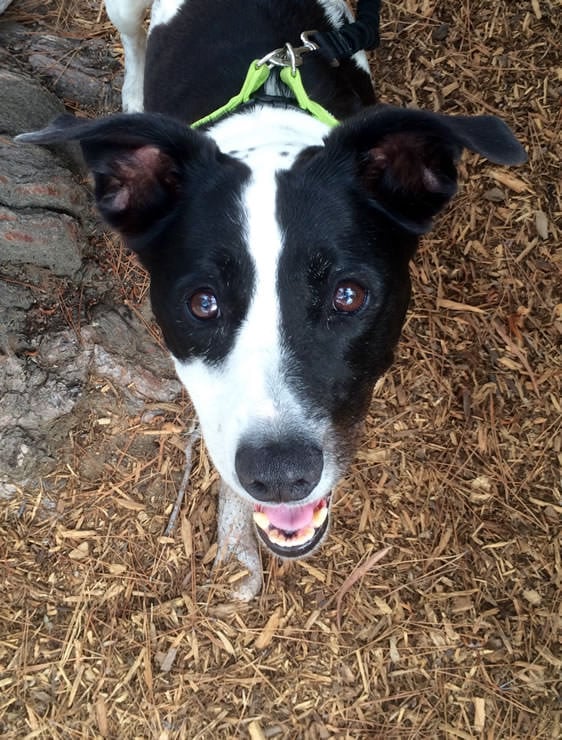 I had to pretend to be a squirrel to get this picture.

After telling her story here in early March, several of you chimed in with some suggestions that quite literally saved her life (I will be forever grateful. Thank you.). Two people suggested we stop feeding her rice (we switched to pumpkin), and one nearby reader referred us to another oncologist for a second opinion, who in turn referred us to Dr. Palmquist, a holistic veterinarian. He’s been amazing — for his medical advice and wisdom (blending Eastern and Western medicine), his dietary guidance, and most of all, for his incredible support.

I last posted an update in June, after Molly and I had taken a weekend trip to Catalina island. Since then, we’ve had some ups and downs, but she’s still going strong.

I’m continuing to share the nitty-gritty details of Molly’s story because one of you might be in a similar situation, and perhaps it will help. If there’s anything I’ve learned over the past year, is that these things require putting out a lot of intense, positive energy to the universe — and you never know how you’ll wind up connecting the dots. 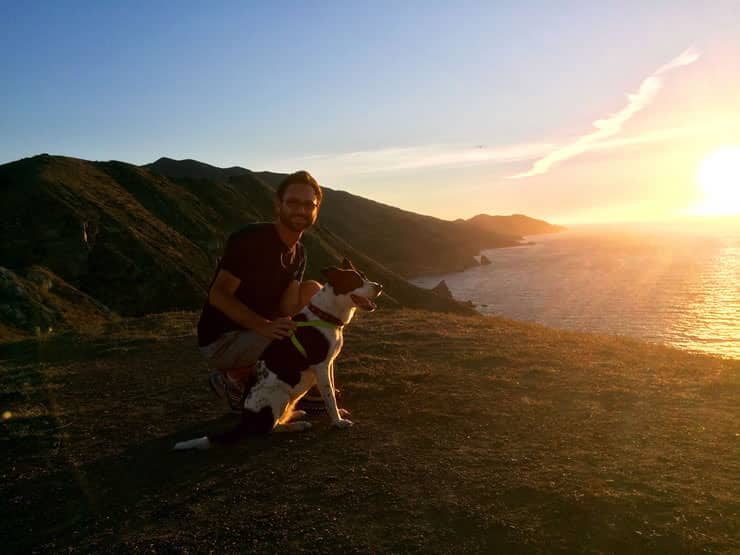 Enjoying the sunset on Catalina Island

This is a good spot to mention that we had been struggling with two ongoing issues, that may or may not have been directly caused by the cancer. She had developed urinary incontinence and a mild cough. I’m pleased to report that both of these problems are behind us! For the incontinence, we started giving her Proin, which I’ll say is quite possibly the most wonderful drug ever. After three days, the incontinence vanished, and our rugs and furniture are safe again. As for the cough, we switched to walking her with a harness so she wouldn’t pull on her collar (another reader suggestion!), and, after a few weeks that seems to have made the difference.

In mid-August, we decided to try treating her with Palladia, an anti-cancer drug usually used for mast cell tumors in dogs (it’s a pill given at home, so it’s a lot more manageable than chemotherapy). It was a long shot, and we had been particularly hesitant to try it because the most common side effect can be gastric upset and bleeding — which are the exact problems we had been facing earlier, particularly with Molly’s irritable bowel disease and the ulcer. Nevertheless, there are very few treatment options available for gastrinomas, and we felt she would be strong enough now to try it — her blood work was even “amazingly normal” according to Dr. Chretin.

About a week after we started the Palladia, we went to visit my friend Jim at his new farm. Molly had a ton of fun, running around, sniffing everything, and just being a dog on a farm. 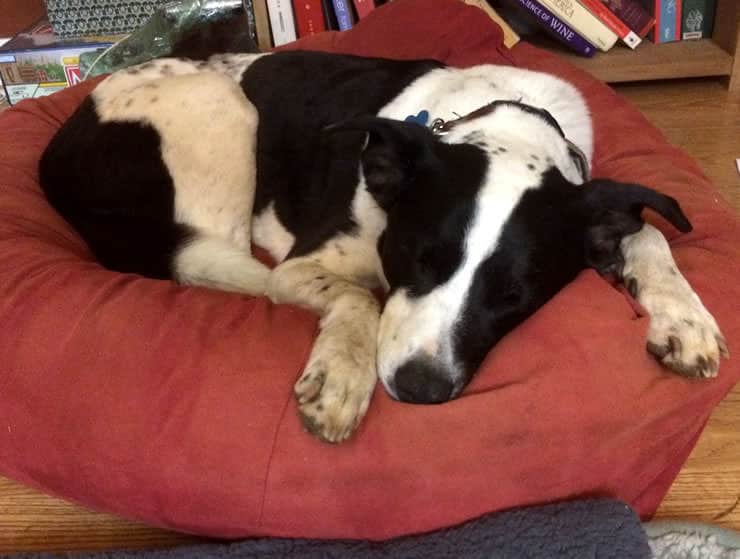 All tuckered out at the farm

Unfortunately, a couple of days after we returned home, she started to have another bout of diarrhea. But it was different this time. It was much worse. Two days of blood instead of poop, and we started to get very scared.

Dr. Chretin thought it unlikely that it was from the Palladia, but we temporarily discontinued it anyway, just to be safe. After about a week, it cleared up, only to come roaring back again. By mid-September we put her on a lengthy course of Metronidazole and Drontal Plus, in case it was a parasite or worms. We also did another ultrasound around that time, and saw that the tumors had grown slightly since the previous look, unfortunately. From that, Dr. Chretin felt it was not worth continuing with the Palladia.

At this point it felt like we were completely out of options, and were doing nothing. We decided not to do chemotherapy, because it seemed very unlikely that it would have actually helped, and we didn’t want to put Molly (or us) through the weekly treatments. 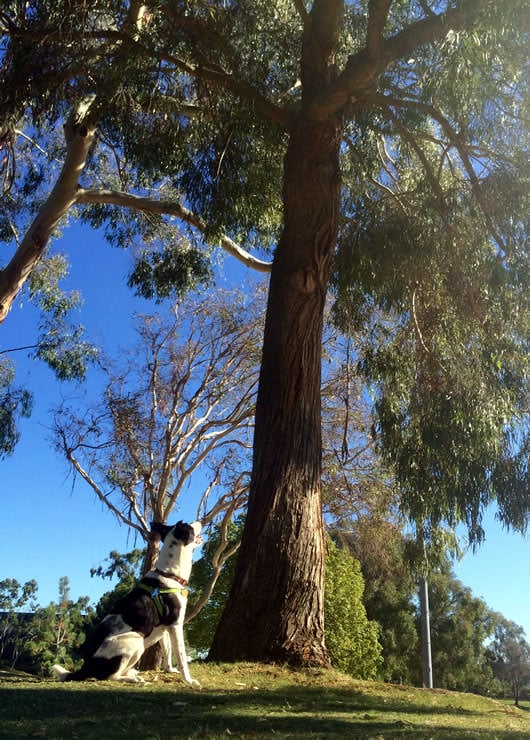 Yep, there’s a squirrel up there somewhere.

But Dr. Palmquist reminded me that we were not doing nothing. We were showering her with love, taking her on two long walks each day, traveling with her whenever possible, cooking for her from scratch (trying different things, including scrambled eggs and yogurt), and we are still giving her Chinese herbs to help fight the cancer.

By October, the diarrhea had come and gone a few times. We started to realize that this was probably due to her irritable bowel disease and not the cancer (if it was the cancer, I figure it would only continue to get worse). That was a relief, but we still didn’t have the diarrhea under control, and in an effort to eliminate variables, we were feeding her the simplest possible diet: scrambled eggs, plain cooked chicken, turkey, or pork (depending on what we could get her to eat! When her IBD is flaring up, she’s a very picky eater.).

Later in that month, we started including probiotic supplements in her diet. We had some VSL #3 still in the fridge from trying it last year (it’s for people with IBD and ulcerative colitis; it didn’t seem to help then, though now I realize we may not have had her on it long enough). At the recommendation of our friends Rene and Ron, who had also struggled with diarrhea in their dog Rambo for months, we started giving her Florastor as well. 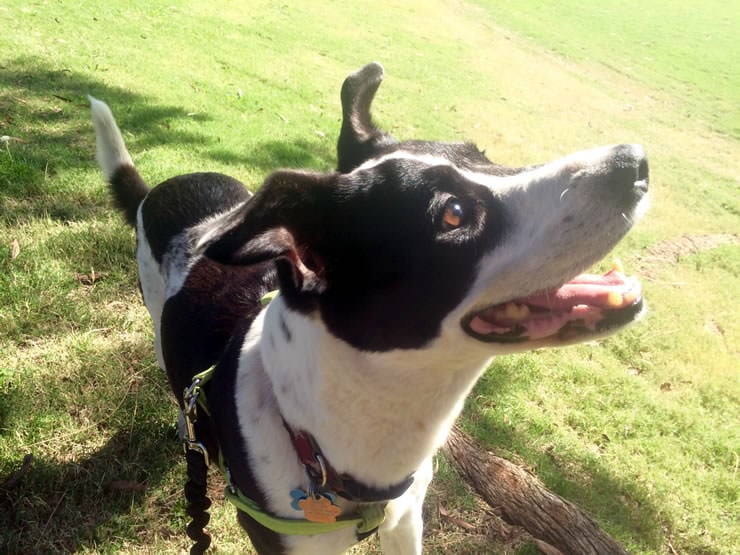 The diarrhea continued, and I started wondering if that perhaps she’s malnourished, even though her weight is stable. We’ve been cooking for her from scratch since March, could micronutrient deficiencies be contributing to her digestive woes? Dr. Palmquist had originally mentioned that she’d be just fine “for months” on meat alone — and of course, when he originally said that, she was expected to live just a couple more, so it really didn’t matter (just getting her to eat and keep food down was the priority then!). But here we were, many months later, and we were still feeding her only chicken or turkey — we had even stopped adding pumpkin, squash, or sweet potato, since she was turned off by them.

On a trip to Whole Foods, I took a look at the ingredients in the Freshpet Turkey dog food. It is basically the same ingredients we had been giving her: Turkey and sweet potato, with some spinach and blueberries, plus a dose of added vitamins and minerals (as with all store-bought dog food, they add those to make it “nutritionally complete”).  I picked up a tube of the stuff, figuring it was worth a try.

I gave Molly some that afternoon. A few hours later, she was the most playful I’d seen in weeks. Her puppy-like personality reappeared, just like that. There’s no doubt in my mind that there was something in that food that her body was desperately needing.

Over the next few days, we transitioned to meals of half Freshpet, half home-cooked meat (boiled skinless and boneless chicken thighs, shredded). The diarrhea subsided, and it hasn’t come back since the week of Thanksgiving.

We haven’t been to the doctors’ offices nearly as often in the past few months, which is a huge relief. But when we last discussed it, Dr. Bruyette still thought it was a gastrinoma, Dr. Chretin thinks it may not actually be a gastrinoma (though he’s sure it’s a neuroendocrine tumor of some kind), and Dr. Palmquist doesn’t care what we call it, because at this point it’s not going to make one bit of difference.

We’re just going to stay the course, and savor every moment with our girl. 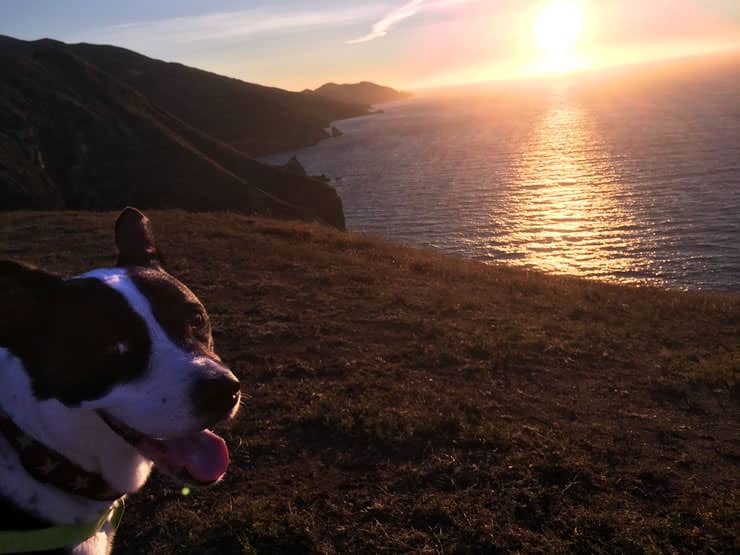 Dr. Palmquist captioned this, “Come run with me and let’s see what fun we can have together.” Indeed.

I'm sharing Molly's current foods and medicines, just in case it's helpful for anyone who has a dog in a similar situation. This is a bit of a moving target - we have to keep adapting as her IBD flares up, but for right now, this is what's working!
Author Andrew

Happy to see your love towards Molly. Molly is so cute.

Thank you for sharing your story with us. Is Molly still with us I hope? I have 2 boy afghans with cancer i lost a female afghan to cancer in February. My dog wont eat anything so i feed him meatballs made of biljac

I’m so sorry for your loss. Sadly, we also said goodbye to Molly, in February of 2019. But she was with us for almost exactly three years after her diagnosis, and as far as we can tell she wasn’t suffering – so I like to think we did really, really well. But I also couldn’t bear to write about it on my blog… maybe someday.

We adopted a new boy, Harry, last fall, and he’s fantastic. We think he’s a pitbull-sharpei mix, and he’s the sweetest thing ever. And, it turns out that he likes to eat everything — including lots of fresh veggies (a dog that likes zucchini and carrots? really?!).

For your picky eater, perhaps he’d like bone broth? https://eatingrules.com/how-to-make-bone-broth/ Molly went nuts for it every time…

Arthur In the Garden!

Thanks for sharing. My Pitt bull \ black Labrador went through six months of chemo for small cell carcinoma before it failed then lived for about six months more on diet\NSAIDS…

Author
Andrew
Reply to  Arthur In the Garden!

Thanks Arthur – and I’m so terribly sorry for your loss – but hope you got to enjoy those last months with your pup. It’s amazing what a difference a good diet makes.

Good food can’t solve everything, but it sure can help. Sending you a big hug!

Did you use a particular type/brand of Xu Fu Zhu Yu Tang?

Hi Gary. We purchased it directly from our vet, but I think the brand he likes is Kan Essentials.

As a sidenote – today is actually the one-year anniversary of Molly’s passing. I haven’t seen any comments on any posts about her in quite some time, so it’s poignant that you found and commented on this post today. I hope your dog is doing okay.

So sorry to hear you lost Molly. I hope today brought back many good memories of her

Wow Andrew, so great to hear about your journey with Molly and everything you’ve been doing for her. I know what it’s like to have a dog that people are always wondering about. My family dog was 16 when he died, and my (non animal loving friends) would often make jokes about his age and his inevitable death. Yeah, I really loved that… Anyway, he lived a great life full of love.

Molly is so lucky to have owners who care so much for her! Keep up the amazing work and good luck Molly!