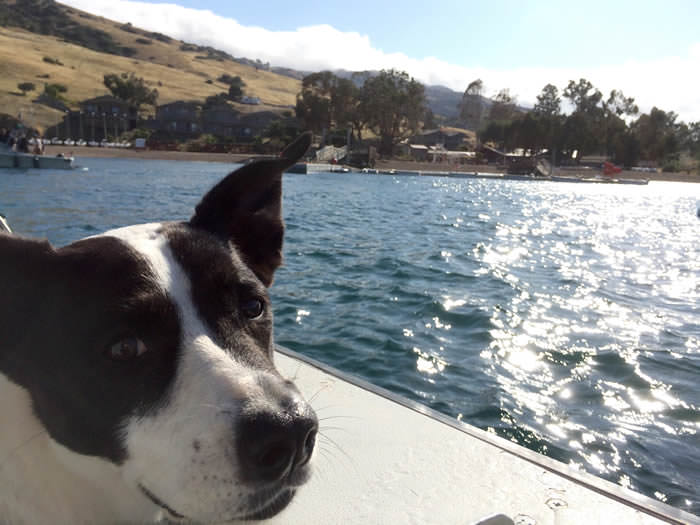 Here is, perhaps, the biggest understatement of the year: I’m pleased to report that Molly is doing well.

Previously, on Keeping up with Molly (insert video montage here)… Our sweet dog Molly’s digestive issues plagued her since the day we brought her home. After about a year of failing to find the right food for her, we found that she had inadvertently been ingesting gravel from our backyard. After three weeks of medication to help the grit move out naturally, which didn’t work, she was down to 36 pounds from her previously healthy 43. So in she went for surgery to clear things out. While there, they found tumors on her pancreas and liver. The official diagnosis is that it’s gastrinoma, an extremely rare neuroendocrine cancer. (We’re talking so rare that Dr. Rosenberg, who heads the Veterinary Cancer Group of Los Angeles, told me she had seen only two other cases in her thirty-plus-year career.)

Not enthusiastic with the treatment options provided by two oncologists — and certainly not content with their estimate of “she has one or two months to live” — we started working with Dr. Palmquist, our hero holistic veterinarian. Our first order of business was getting her digestion under control, since, according to Dr. Palmquist, the tumors were caused by her digestive troubles. We transitioned her to a diet of cooked ground pork, beef bone broth, and organic pumpkin, and it very quickly turned things around. 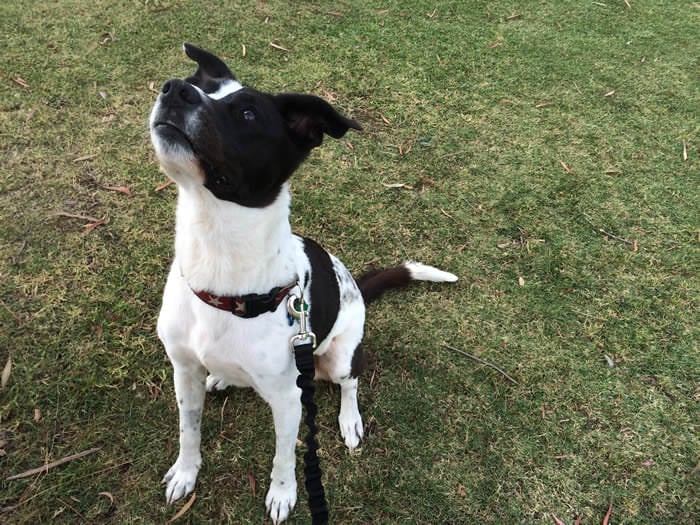 We’ve now settled in to a routine of this combination for breakfast, lunch, and dinner (recipe below). Amazingly, it’s the first time she’s eaten the same food for more than a few weeks…and she still loves it.

At this point, nearly four months after surgery — and two months past her expiration date — Molly has gained all of her weight back. Her coat is soft and shiny. Her eyes are bright and attentive. She is vibrant and full of energy. We now go on two walks a day — typically at least an hour each time. (Most of that time is spent pulling me from tree to tree in the park, seeking out every squirrel. She’d keep going all day if I’d let her. It eats up a lot of time, but I figure it’s good for both of us.) 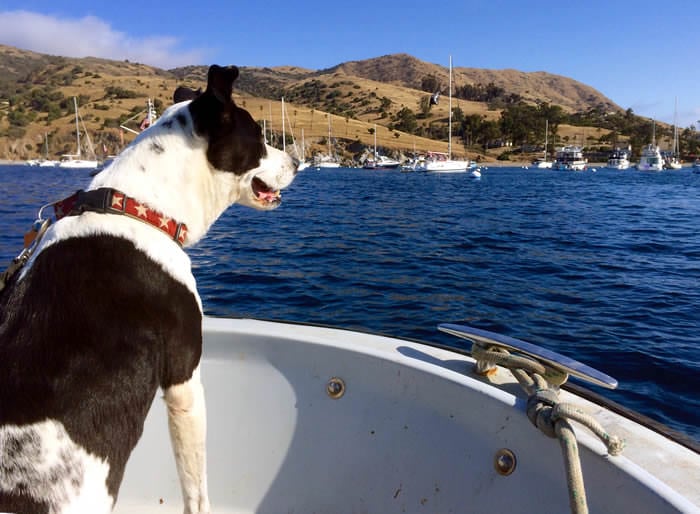 Last weekend I took her to Catalina Island for a quick getaway. She loved being on the boats, fetching sticks in the ocean, and taking in every single scent around camp. She was having so much fun, in fact, that she was clearly grumpy when it was time for bed (late – at 11pm!). She then woke me up at 2:30am, licking my face. She never wakes us up in the middle of the night, so I figured she must have been desperate to go outside to pee. I wearily threw on a jacket and pants and took her outside. And what did she do? She started sniffing around, wanting to look for foxes or cats or, well, anything that smelled good. She totally played me!

Now I was the grumpy one as I dragged her back to bed. She begrudgingly went to sleep — but only until 6:30am, when she decided we had both slept enough and it was time to go out and explore again. She was truly a tireless, super-excited kid at summer camp. 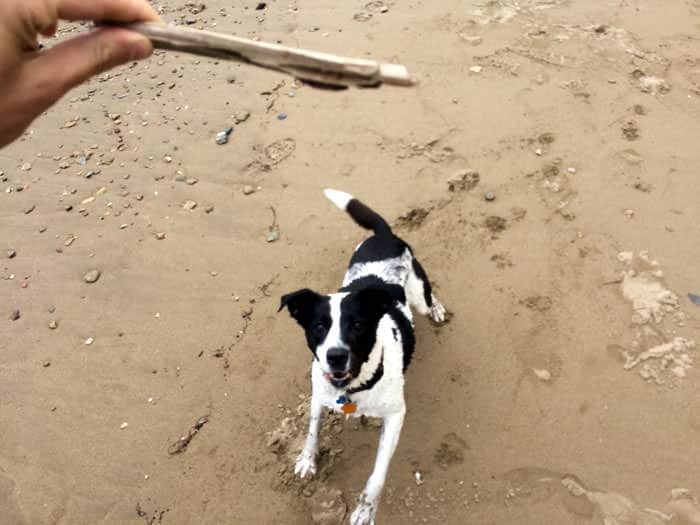 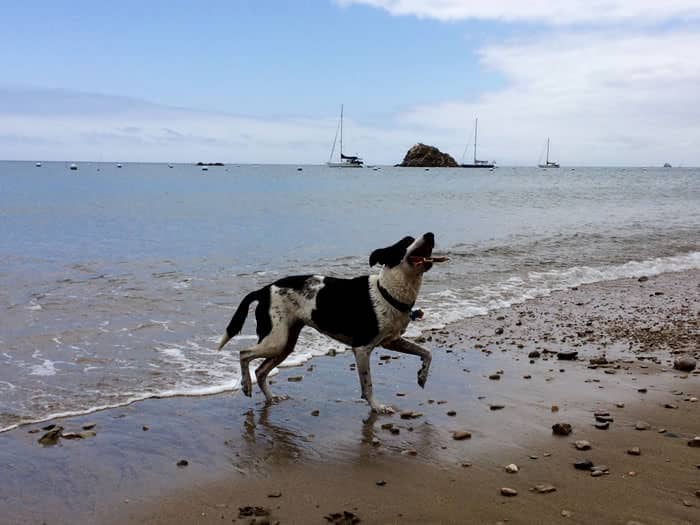 There are still two minor issues that we’re troubleshooting: She has a bit of urinary incontinence and a throat irritation of some kind. I hope they’re unrelated to the cancer, and are a mere annoyance. However, on the chance that one of you reading this has a brilliant idea, I wanted to mention it here. Had it not been for your suggestions of removing rice from her diet, and for the recommendation to see Dr. Rosenberg, who referred us to Dr. Palmquist, I’m quite certain that Molly would be dead right now. This blog quite literally saved her life.

On Dr. Palmquist’s recommendation, we’ve been adding ground, raw pumpkin seeds into her food, and giving her Bladder Strength pills. They may have helped, but neither has solved the issue. I then started to wonder if it might be a side effect of one of the other medications she’s on. Sure enough, after consulting Dr. Google (which I only recommend doing with a great deal of skepticism), I found that incontinence is an uncommon side effect of metoclopramide in people. We’ve reduced the dose to one-third of what we had been giving her, and it seems to have helped…Now she tends to leak only after it’s been hot and has exerted herself a lot, and is then back home and napping. Next week I’m meeting with Dr. Palmquist and I’m hoping we can discontinue the metoclopramide entirely — with any luck, that will solve the incontinence inconvenience.

The second issue is the cough. It’s actually more like a gotta-clear-her-throat kind of thing, and is, as with most things Molly, intermittent. We have had her on one Chinese herb, Er Chen Tang, for a while, which we give every third day with lunch. It’s supposed to help reduce phlegm and balance the Qì. (She also gets Pepcid twice a day, to help reduce stomach acid levels — possibly elevated by the activity of the tumor — and manage gastric reflux.) We don’t know if the phlegm is related to the cancer, or if she just, well, gets phlegmmy sometimes. 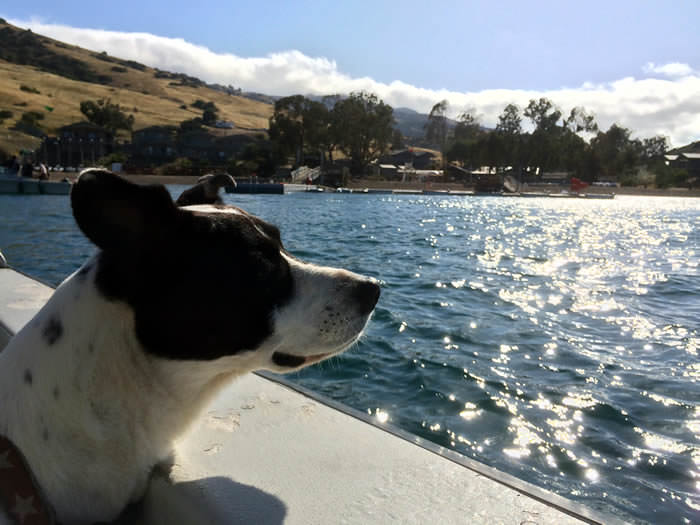 So that’s our life right now. Molly is the most energetic and happy she’s been since we adopted her. We walk a lot, and we cook a lot of ground pork (it’s impossible to buy ten pounds of ground pork at Whole Foods without being asked, “Whatchya making??” And then when you tell people, “It’s for our dog,” they definitely raise an eyebrow…).

At this point, we have no idea what the tumors on her liver are doing. They could have grown, they could have spread to other areas, or they could have — dare I say it — disappeared. I don’t want to say she’s “cured” or “healed” because we really don’t know, and I do get a wee bit superstitious about these kinds of things (who doesn’t?), but I like to remind myself that the liver is the only organ that can regenerate; it’s possible that the tumors are actually gone.

We haven’t done another ultrasound yet because we’re not sure we want to know the answer. If we do, what will we do with that information? If the tumors have grown, we’ll be tremendously deflated, and Molly will certainly pick up on that. If they’ve stayed the same, we’ll be disappointed, but will likely just stay the course. And if they’re gone, then we might become complacent and not be as meticulous with her food, walks, and playtime (and if we stop any of the medications and herbs, might the tumors return?).

So I don’t know what the future for our sweet girl will bring, but I sure do hope that we’ll be spending many more years together, doing our best to keep up with her. 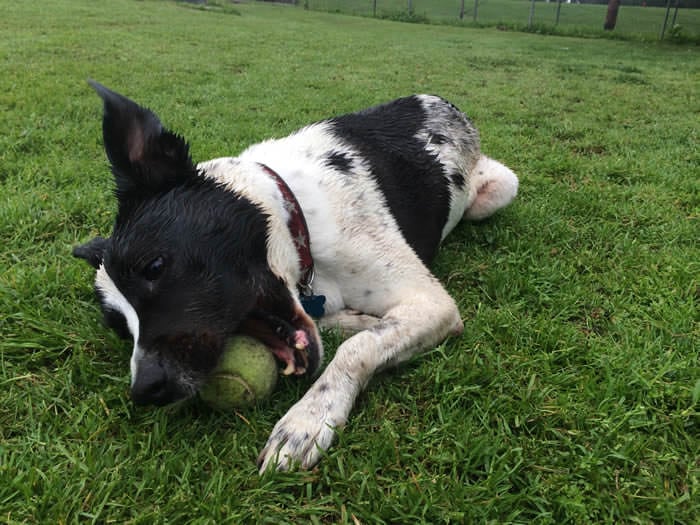 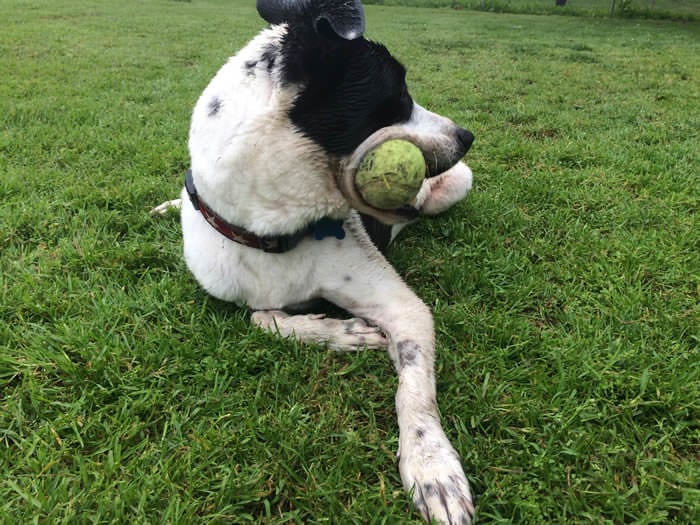 For those of you interested in the nitty-gritty details of what Molly's eating, I'm providing the current recipe that we're giving her. We had been giving her slightly more than this recently, but she's reached her target weight of 43 pounds, so we've reduced it to the quantities shown below. It is working well for her to get this amount three times per day. Of course your dog's needs will vary, and it should be noted that this food is not "nutritionally complete."

We get our pork and beef marrow bones from our local Whole Foods, and always choose the highest "step" rating as possible. I try to buy the most humane, sustainable, healthy meat we can, both for the sake of our dog and for the animals that she's eating.
Course Dog Food
Cuisine Canine
Prep Time 5 minutes
Cook Time 30 minutes
Total Time 35 minutes
Calories 319 kcal
Author Andrew Wilder

I’m so, so happy to hear Molly is doing well. I had a sickly, special needs kitty for 14 years. It took finding the right doctor and lots of experimenting to figure out how to best care for her. Seeing her play and just live to her full potential of “cat-ness” was so rewarding. Molly is so lucky to have found you guys and, I’m thinking, you feel pretty lucky to have found her.

Hi, I have had a cough for over a year that is caused by acid reflux. I’ve gone through several medications before finding one that mostly controls the acid reflux while not causing other side effects. I still cough some but not constantly. Maybe Molly’s cough is being caused by her acid reflux. Good luck and I’ll keep her in my prayers.

I’m no expert in dog health, but the best way to cure cough for people is honey (1 – 3 tablespoons daily) and pineapple juice. I do not know if you can give any of it to Molly, but it won’t hurt to ask her doctor if it would be ok.

I lost my best dog friend due to cancer, so I know how it hurts. I hope Molly will get even better, so you could spend many more years together.

Thanks Dad… and that’s exactly why we’re not saying she’s “cured” or “healed”… even if people keep asking if she’s a puppy. 🙂

Andrew – this is the greatest email I have read in a long time! Serious great teamwork! Kudos to all. Thank you so very much for posting your awesome update. I read and cried while I smiled. Damn, Molly is so happy and so blessed with her fabulous parents. And wow, you are hooked up with extraordinary vets!

(On a personal note, your blog post, in part, makes me so emo because I wasn’t nearly as compassionate as you have been when my mom was dying of cancer and talked about nutritional helps. I scoffed. But that was then. And thank God today my mind is more open.) I am amazed at what a difference good, and bad, nutrition makes to every living thing. Thank you again for sharing your story and educating us all. I am thrilled. Go Molly!

Thanks Jennifer – I so appreciate your kind words. And please don’t be hard on yourself for the past – we’re all on a journey of learning and discovery, and the important thing is how we move forward. Food and nutrition is tremendously important, but it’s also not a cure-all… A big part of Molly’s rebound is that her problems stemmed specifically from the “wrong” foods for her, and finally — down to the last minute, really — finding the “right” foods for her.

Our Boston terrier has mineral deposits on his ankle avheilies tendon, he will need orthopedic surgery if I can’t help him with the pain? Do you have any suggestions. Thanks june….

Hi June – sorry to hear about your pup’s troubles. Based on my experience with Dr. Palmquist, I would definitely suggest seeking a second opinion from a holistic veterinarian. You can use the AHVMA’s search tool to find one in your area: http://www.ahvma.org/find-a-holistic-veterinarian/

Hope that helps and that he gets better soon!!