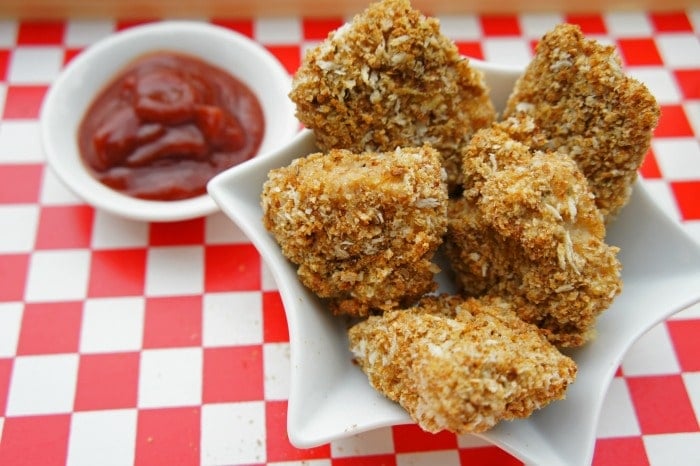 My sister and I developed this recipe as an alternative to the ubiquitous, ultra-processed fried chicken nuggets for my niece, Sarah, nearly two decades ago when she was about three-years-old.

It all started one afternoon after I gave in to Sarah’s plea to go to McDonald’s. She ran around the colorful play area with the other kids, taking a break every so often to return to the table for a bite of food. During one of her absences, I reached over for one of her chicken nuggets. Breaking it in half to observe it, I contemplated the texture. “White meat?Dark meat?” No way to tell. Then, I took a nibble. It had a flat, yet salty flavor and that enhanced chicken flavor associated with powdered bouillon cubes, what people in the restaurant industry refer to as “chicken base.”

I remember wondering, “What’s actually in these nuggets?” I had never heard of mechanically separated poultry (MSP), the pink paste-like goo that Jamie Oliver famously recreated in his Food Revolution show. I didn’t know as much about the complexities of industrial poultry farming in America. But it bothered me so much that I couldn’t identify whether it was dark or white meat that I started to make them myself and took Sarah to the park instead of McDonald’s to play.

Store-bought bread crumbs can be stale and loaded with sodium. They’re not only easy to make, but also a great way to use up leftover bread and crackers. I’m baffled people will spend up to $2.50 a pound for breadcrumbs. For each cup, simply toast two slices of whole grain bread, let them cool, and process them into crumbs in a small food processor.

Cooking the chicken on a cooling rack allows the dry heat to crisp both sides, but if you don’t have one, simply coat a parchment or foil-lined cookie sheet with cooking spray, and turn the chicken pieces over after ten minutes. In place of cooking spray, I use a bit of olive oil in a spray-pump or mister. If you don’t have this, fear not, they will still turn out fine. Makes about 2 dozen nuggets
Course Entree
Cuisine American
Prep Time 20 minutes
Cook Time 15 minutes
Total Time 35 minutes
Yield 6 servings
Calories 298 kcal
Author Kathleen Flinn

Reprinted with permission from The Kitchen Counter Cooking School by Kathleen Flinn, Viking/Penguin 2011.

Her best-selling memoir The Sharper Your Knife, the Less You Cry

is about her experiences training at the famed culinary school Le Cordon Bleu in Paris.

We found this while searching for baked chicken nuggets to make on Halloween for my kids and their friends as a pre-trick or treating snack since we swore off fast food at the start of the school year. Simple, quick and delicious. I didn’t have any problem with sticking, but I made sure to spray the rack pretty well with cooking spray. The kids liked the added flavor of the parmesean cheese in them. We served with my brother’s homemade BBQ sauce and they were a hit. They’ll be something I made again and again, so a big thanks!

I made these yesterday for dinner and my kids liked them! I just have to do one batch without the parm chz for the one kid, but now I have a great alternative to the bagged Tyson pseudo ck tenders!! Thank you so much for this recipe! one step closer to getting the family off processed foods!!

We made these last night and they were universally a hit. Next time I will cut down on the thyme and try other spices. Maybe lemon pepper? Just a personal preference thing. These also stuck pretty badly, so maybe more spray oil? Like the tip above about lentils … I’ll have to try that! These go great with butternut squash “fries.” Now I just need to make a bunch in bulk and freeze them for some quick lunches.

Thanks for the recipe! Just made a batch of these and they were delicious! I put lentils through the food processor instead of using breadcrumbs, though. Gives things a nice crunch.

The last time we were at McD was about 20 years ago too, our family has referred to it as mcboogers since. That wierd not white/not dark meat stuff creeped me out too.

Thanks for your feedback. My husband Mike loves these and they’ve been his go-to thing to snack on when hosting our kids friends or watching football games. One other thing I add is chili powder for a bit of a kick, or a bit of homemade dried porcini salt. We make our own ketchup too (Anna tested that recipe, too! Hi Anna!)

I am a grown up who likes chicken strips, these are going to have to go on the menu this month!

I was a recipe tester for Kathleen’s new book and I tested this recipe last year. They’re GREAT, and my kids love them. I have made them with every possible variation on leftover bread, and served them hot, cold and room temperature. We make our own ketchup, and voila, healthy dipping sauce. The tip on putting the nuggets on the rack is a huge plus because it doesn’t leave part of the breading on the baking sheet and they cook evenly.

Ketchup! I have been searching for a recipe that tastes good. Would you be willing to share? All the recipes I find have poor ratings. Thanks.

I haven’t tried it yet, but I’ve heard good things about my friend Gaby’s Homemade Spicy Ketchup Recipe.

(The brown sugar doesn’t really pass the kitchen test, so you might want to try rapadura or another “raw” sugar in its place — at least during October!)

Those sound amazing. and simple! will try these this week, THANK YOU!
Have some apple chips in the oven right now!!! Smells so good.

We have been making (baking) Chicken Strips, Nuggets and French Fries for years. My children no longer ask to go to McDonald’s or any other processed fast food place.

We use the infomercial NuWave Oven. But, they are equally as good in traditional oven.

Thanks for sharing your recipe.