Andy Bellatti is a registered dietitian and an outspoken critic of the food industry’s influence on the Academy of Nutrition and Dietetics, the trade group that educates and certifies RDs. He wrote the nutrition blog Small Bites for more than five years (his nearly 2,000 posts are still available on his site), and continues to be active in social media and on other sites around the web. Andy and I have also collaborated several times before.

A few weeks ago, Andy created a Facebook page called Dietitians for Professional Integrity, advocating for greater financial transparency as well as ethical, socially responsible, and relevant corporate sponsorships within the Academy. He invited me to join the group, which I enthusiastically did, of course (it’s not just for RDs – he invites all supporters to join). I also asked if I could interview him to help spread the word, and he quickly agreed.  I sent a few questions his way, and here’s what he has to say.

What led you to create this group?

For several years, I was disappointed with — and embarrassed by — many of the actions and decisions taken by the Academy of Nutrition and Dietetics (AND), the professional organization that represents me as a Registered Dietitian. Through social media, I was able to meet other like-minded RDs who also saw the inherent problems with AND taking money from the likes of Coca-Cola, PepsiCo, and Hershey’s.

When Michele Simon’s report on AND was released earlier this year, the issue of these problematic partnerships became a national topic of conversation and helped mobilize many of us who have had these concerns for years.

I thought it would be an opportune time to bring together RDs with similar concerns and create a forum where we can voice our concerns. We are proud of the RD credential, but not at all proud of how we are represented by AND.

It’s also important to note that many of us have written to AND with these concerns over the years, only to never receive a response or receive a form letter stating that the sponsorship model causes no conflicts of interest. In other words, AND has shown — time and again — just how tone-deaf and out of touch they are.

What’s most troubling is that AND has spent years fighting for licensure to protect the RD credential without realizing that one main reason why so many people seek out nutrition advice from non-RDs is precisely because AND’s corporate sponsorship model makes all RDs look like puppets of the food industry. For some reason, AND doesn’t connect those dots. If their concern is showcasing RDs as the experts on nutrition, getting rid of these insidious corporate sponsorships would work wonders.

The name “Dietitians for Professional Integrity” seems a little redundant. Or are you implying that not all dietitians have integrity?

The name has more to do with what we believe to be the Academy of Nutrition and Dietetics’ lack of integrity. This Facebook group was formed solely by Registered Dietitians who want better representation. We are simply calling for more ethical behavior from AND so that the RD credential can be seen as something worthy of respect. I can’t believe this is seen by some as “extreme” (it speaks volumes, if you ask me).

While many RDs have supported this cause (along with doctors, public health advocates, and notable nutritionists like Marion Nestle), some of the most vocal opponents to this movement have been other RDs. Of course, they are either spokespeople for the Academy or work for the food industry, which makes their criticism both predictable and inconsequential.

Clearly, the formation of this group — and the support it has received since its inception — has struck a nerve with RDs who are very friendly with the food industry, which means we’re doing something right.

What are you hoping to accomplish with this group?

Our hope is to help create an Academy of Nutrition and Dietetics that represents RDs with honor and integrity, rather than sell us out to the highest bidder. Many of our colleagues have been working from within to bring about change, and we think that adding this public and external factor can only help to bring about change.

Isn’t corporate sponsorship a “necessary evil” in today’s world? How can it work so that the Academy can get the funding it needs, without being unduly influenced by the food industry?

While going the “zero sponsorship” route is a possibility, we are not opposed to sponsorship entirely. We believe there are ways to receive funding without posing such an atrocious conflict of interest. The American Public Health Association, for example, has some really terrific guidelines for sponsorship.

Also, within AND, the Hunger & Environmental Nutrition Dietetic Practice Group has come up with some really great criteria for ethical sponsorship (note how, based on those guidelines, many of the current AND sponsors would not be considered appropriate).

We also urge AND to think outside the food box for sponsorship. This can be done. 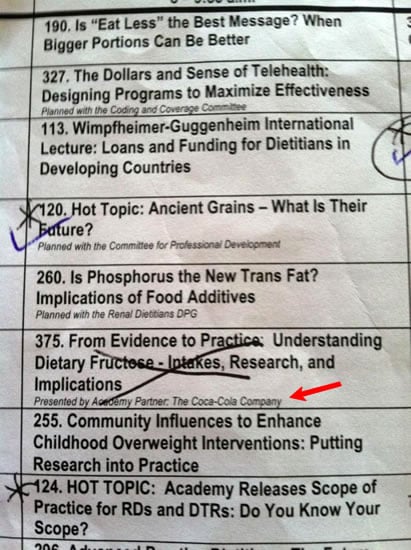 Photo by Debra Riedesel, RD, LD. She says:
“Photo is a snapshot of the Philadelphia FNCE session program at a glance. Sunday, October 7, 2012. A few choices for 8:00-930 a.m. Asterisk indicates interest, check mark indicates session attended. Crossed out session is one I was definitely not attending.”

This may be a little bit of a tangent, but: It seems that all nutrition and health information we receive these days is inherently biased. Studies are paid for by big companies with vested financial interests, or media outlets are alarmist in their reporting, and on and on. How can we restore some sense of sanity to evidence-based research? How do we know who to trust, and who to ignore?

I urge everyone to apply these three tips:

* Always look to see who an “expert” is affiliated with. Don’t just look for food companies or specific industries. Look for front groups, too (such as the International Food Information Council, the American Beverage Industry, or the Center for Consumer Freedom). If someone works for the Corn Refiners Association or PepsiCo, they certainly aren’t interested in an objective dialogue on the issue. Someone with no ties to a company that uses high fructose corn syrup for hundreds of products is much more likely to offer data that reflects actual research, as opposed to corporate interests and spin

* Look for intelligent discourse. I always appreciate experts who ask tough questions and look at food through multiple lenses — social justice, animal and human welfare, sustainability, agriculture, etc. Chances are that someone whose sole preoccupation is how to save 40 calories in a dish by using spray butter from a pressurized canister isn’t a good source to get the latest on nutrition research.

* Look for nuances. While there are some absolutes in nutrition (partially hydrogenated oils are unhealthy, soda offers zero nutrition, etc.) there are also lots of grey areas. Statements like “fruit is fattening”, “high-fat foods are bad”, and “artificial sweeteners are 100% safe” are not reflective of the research that is out there. A reliable expert, for example, will differentiate between fruit juice and whole fruit, between eating an avocado and cooking with soybean oil, and will at the very least point out that artificial sweeteners are under a lot of scrutiny right now for several reasons.

Most of my readers aren’t dietitians. What can they do to help support the cause?

You can help support the cause by Liking the Facebook page and helping spread the word. In the same way that you don’t need to be sitting in the Oval Office to be an agent of change, you also don’t need to be a Registered Dietitian to appreciate how problematic it is for a national nutrition organization to take money from the like of Coca-Cola and PepsiCo. Speaking out and demanding better is enough.

Public pressure is a great agent for change. Staying quiet only perpetuates the status quo. Of course you will have detractors when you speak out, but that comes with the territory (and, remember, critics only come out when the work you’re doing threatens their foundation, so consider their barking a sign that you’re progressing).

I am a registered dietitian and have made comments to AND (ADA) for years about Coca-cola and so on. No response. Locally, I have written several articles on local foods and eating simply; I asked AND to be included in their daily posts…NO. Not evidence-based, my works which target my community, are ‘opinion’. 35 years as a registered dietitian and ‘poster-child’ for good nutrition habits. Also, AND (ADA) have created their own perfect storm…for years RDs were asked to bring more young people into the flock and get them into schools….Oops, not enough internships…no other way to become an RD. So, with all these educated young people out there in this day of social media, what the hell to they expect. I am ‘applying’ for CEUs to a Sally Fallon (Weston A. Price Foundation) conference. I am hoping I get it, but this, although traditional eating forums (eat meat, eat… Read more »

You MUST write a book. You are a man who breaks new ground. GREG