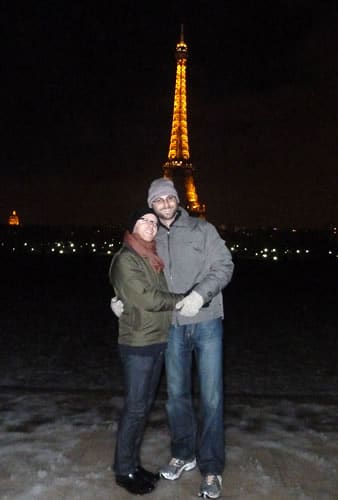 Proof we were there! (and freezing!)

This morning President Obama signed the law to repeal “Don’t Ask, Don’t Tell,” finally ending the failed, discriminatory policy. I believe that this marks an important and exciting turning point in the fight for equality in America.

On the heels of such an important policy change, now feels like the right time to share some personal news. I know I don’t normally talk much about my private life here, but today I will indulge in a noteworthy exception.

It wasn’t until recently that I would even mention my boyfriend Matty on the blog — and even then, I haven’t said all that much about him (other than he’s a terrific dinner party host).

A couple of weeks ago, Matty and I went to Paris to visit a friend and to celebrate our one-year anniversary.  After a few days of gorging at incredible restaurants like Brasserie Lipp, Afaria, and Tan Dinh, we headed south to the 700-year-old walled city of Aigues-Mortes. 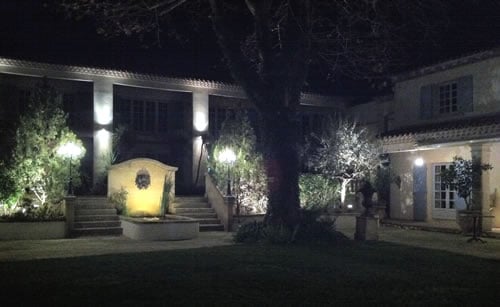 The courtyard of Villa Mazarin the night we arrived.

By the time we settled into our charming hotel, we were exhausted and decided to eat dinner at the hotel restaurant.  It turned out to be the finest dining experience of the entire trip. Distinctively French cuisine, but with a modern bent, it was creative, delicious, and beautifully presented.  When our waiter placed our food on the table, he properly announced its arrival, explaining the dishes and what was in them.  The best part of that was that he didn’t speak any English and our French is practically non-existent — everyone in the room knew that we had barely any idea what he was saying!  It was, thankfully, even more charming than comical.

The next day we were proper tourists, checking out the city walls and the rest of the town. We came across an Indian restaurant, of all places, and decided to go there for dinner. The food was truly superb — some of the best Indian food I’ve ever had. It turned out that the owner, originally from India, had lived in Seattle for a number of years. We ended up closing the place out, but only after he brought over bottles of Jack Daniels and a sweet Cardamom liquor. The three of us drank together for a  few hours until we finally had to call it a night.  Thankfully, the hotel was only a short stumble walk away.

The next day was our anniversary.  We slept late (of course), and then had probably the worst meal of the trip.  The only place that had an open kitchen at 11:30am was a small bar/cafe — it was clearly a local hangout, but nobody seemed to be there for the food.  It wasn’t awful, but by the standards we had quickly grown accustomed in the past few days, we were a bit disappointed. 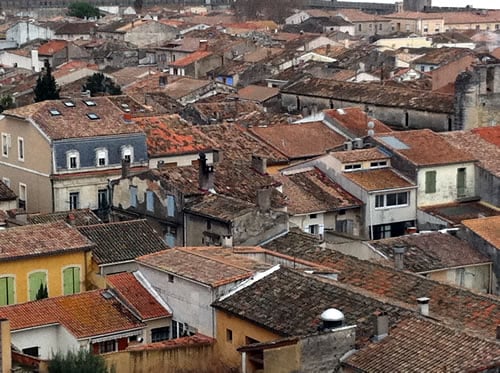 View of the rooftops from the city walls.

A few hours later, we were trying to decide what to do for dinner. We both just wanted a simple meal. So we picked up a baguette from the boulangerie, and some fruit and cheese from the corner store.

As we were walking back to the hotel, I glanced over at Matty and realized that it was a perfect moment.  Here we were, in the South of France, and on the evening of the big day we had come to celebrate, all we wanted to do was to break bread together and have quiet night.  We couldn’t have been any more in sync.

We went about preparing our hotel picnic, spreading out a towel to collect the inevitable baguette crumbs, and using the ice bucket lid as a makeshift plate.  Before we started eating, though, I gave Matty a hug, and told him I had a question for him. I then simply asked, “Will you marry me?”

He said “Yes,” and we proceeded to have one of the best meals of our lives. 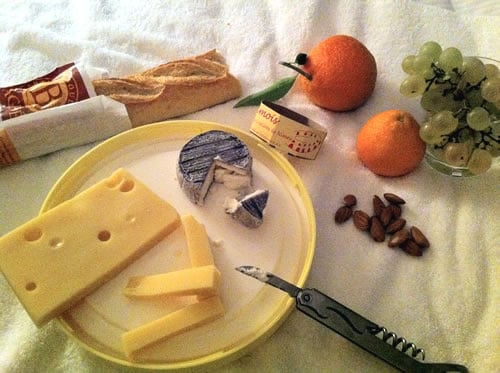 In case you’re wondering, same-sex marriage is not currently yet legal in California, where we plan to get married. Proposition 8, which outlawed gay marriage in 2008, was overturned earlier this year by the District Court of California. That ruling is now being appealed.  The Ninth Circuit Court of Appeals recently heard oral arguments, and we anxiously await their initial ruling. If you’d like to help the fight for equal rights, please consider making a donation to Equality California.

Arthur in the Garden!

Tori @ The Shiksa in the Kitchen

Beautiful!! May you have many, many years of wedded bliss. I’m still amazed that this is even an issue in the United States. I pray for a time when all law-abiding Americans are recognized as equal citizens. I feel like that time is fast approaching. Meanwhile, know that you have my heartfelt support and congratulations. And if you need some beautifully braided wedding challah, you know who to call. 😉

Wow. A huge Thank You to everyone! I’m truly blown away by this outpouring of support. Matty and I are super-excited about, well, all of this.

Baby in the Kitchen

Congrats! I love reading engagement stories … I always get all teary eyed. 🙂 Sounds like a wonderful trip too.

Thank you for sharing such a personal and special moment. Congratulations!

Congrats to both of you! How romantic. And happy holidays as well.