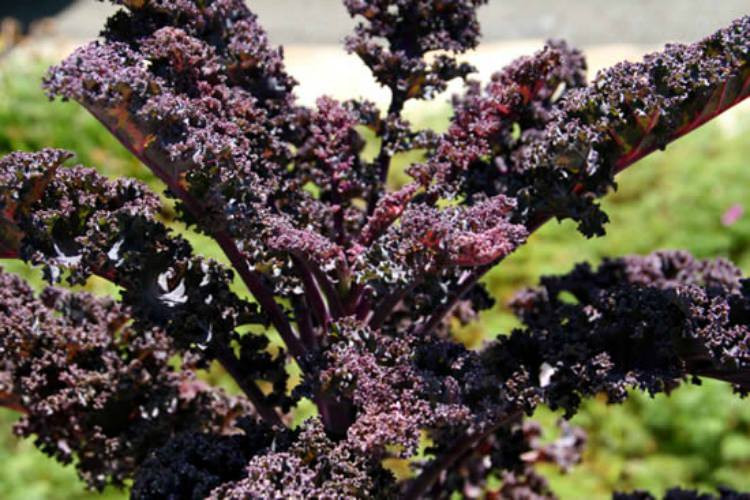 I’m on a mission to get people to think outside the herb box when it comes to their yards.

Sure, it’s easy enough to plunk a basil plant in the garden window for fresh basil nearly all year long, or to sow a little patch of chives in a pot and trim them with a scissors when you need some green confetti to dress up a soup.

And in Southern California and other moderate climates, rosemary grows year ‘round and is used as a landscaping plant, so it’s common for nearly every suburban house to sport a rosemary bush of some kind. This is serendipitous for the enthusiastic home cook.

But I want you to think bigger. Think vegetable garden, think little patch of dirt, and think kale. 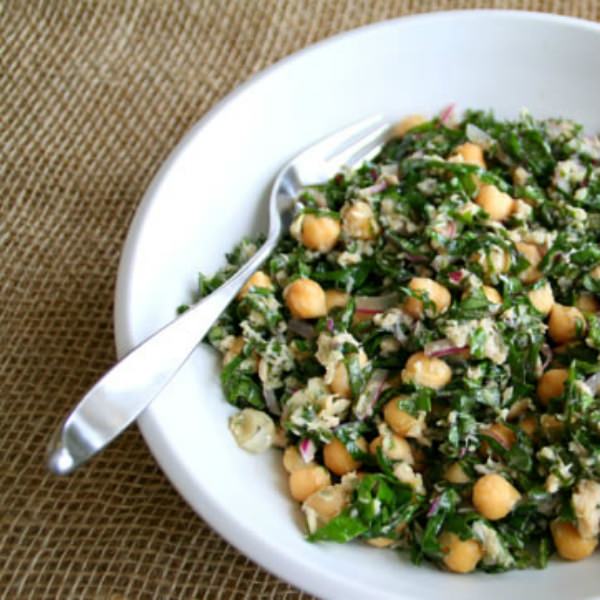 As the weeks wore on, I continued to harvest the lower leaves, making a popular lemony kale salad with garbanzos and tuna, a spritely kale salad with creamy avocado and bright blood orange, and a knockoff of a Trader Joe’s kale salad that is better than the original. I also gave lots away.

I even tied some up like a flower bouquet and gave it to a friend who was having us over for dinner.  She said it was the best hostess gift she ever got, and a day later sent this email: “Sautéed your Kale with Olive oil, Kosher Salt, Currants and Pine Nuts. It is all gone… Yum yum!” 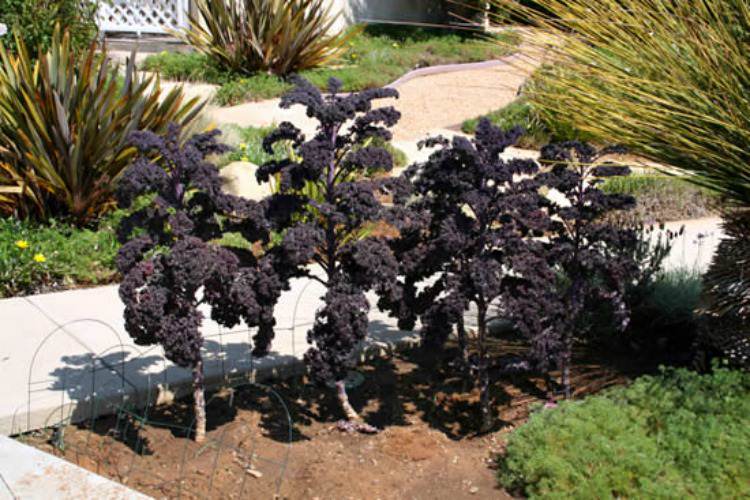 We were on a kale bender! And then a funny thing happened. They continued to grow, turning into veritable small kale trees, 5 feet tall. We were in tall corn..eh..kale! As they flowered, I experimented and left them in the ground, harvesting leaves going on several months. I could have kale in my recipes whenever I wanted, and I threw it in everything – a smoky garbanzo soup, a beans and greens skillet, and morning smoothies.

But my restless gardener soul wasn’t satisfied. Could I perhaps grow different varieties, and where would I put them, anyway? My yard is small, and I thought I was plumb out of room.

One day I was gazing out the front window, though, and looked at my front parkway. You know, the little spot between the curb and the sidewalk, where most of us grow grass. I don’t do grass, but mine is filled with hardy shrubs and whatnot…nothing memorable. It was dirt. Why couldn’t I grow kale there?

I could, and I did. I turned some compost, blood meal, bone meal, peat and other amendments into a patch of parkway dirt, planted a pony pack of a variety called Redbor kale, watered and waited. 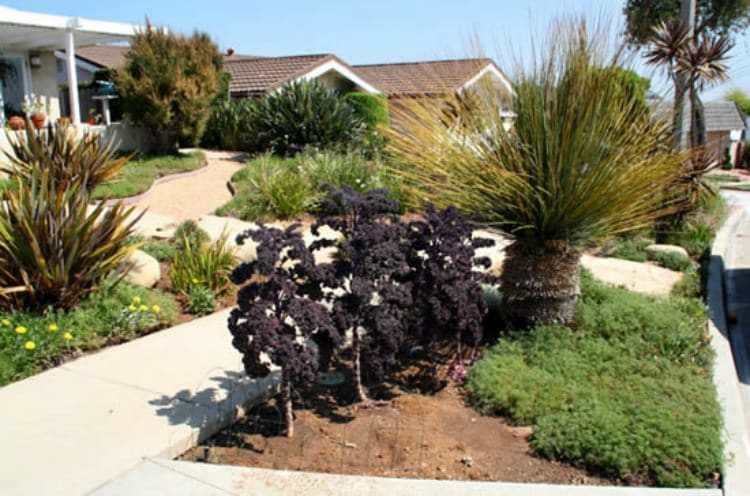 It took off immediately, even in that poor-ish soil, and soon I had a small magenta crop of the prettiest purple kale you ever saw. I put a garden marker sign out there to answer the question of what it was, and a little metal temporary fence to distract any passing dogs who might think it looked like a fire hydrant. It worked!

I say seize your land and use it, wherever it is. My neighbors have embraced my new kale “trees” in the front. I’ve heard some of them comment on it as they walk by on their daily constitutional. Passing dogs are simply bored (thank goodness); there hasn’t been even one sprinkle.

Some cities or communities might not be so welcoming. A man in Missouri had to fight city code enforcers for the right to have a productive kitchen garden (or yarden, as he called it) in his front yard. The city of Oakland wanted to fine a woman $2,500 for growing chard in a vacant lot. And bureaucrats in Quebec tried to shut down a couple who tore out their sod and planted a big kitchen garden; tens of thousands of supporters rallied behind the urban farmers.

The benefits of growing your own are that you can be certain the plants are not sprayed with any pesticides, and you control how long the leaves are on the plant, when to harvest, and which varieties to plant.

The downside, of course, is aphids, and sometimes a cabbage worm or two. Pluck off the worms and dispense with them; let your conscience be your guide. I squish them with gusto. The aphids are a bit trickier – they tend to cluster on tender new growth at the top of the plant, so rub them off with your fingers (gross!), spray them off with water, and use my trick of spraying them with some rubbing alcohol. Don’t mess with MY kale, danged bugs!

But I encourage you to embrace the imperfect leaves, the greenery with a bug hole or two. Who cares? Wash it off, chop it up for your salad or soup, and no one is the wiser.

And let me tell you another secret. Kale is the darling of the moment, for all the right nutritional reasons, but kale is in the 13th minute of its 15 minutes of fame. Waiting in the wings are pea shoots. Pea shoots are the new kale.

You heard it here first, and you know what? They’re even easier to grow!

Dorothy Reinhold is the publisher, food writer, photographer and recipe developer at Shockingly Delicious, where she posts terrific, tried-and-true, scrumptious, “scary good” recipes with big flavors. She has been named one of the Top 50 Mom Food Bloggers by Mom.me, a Top 100 Food Blog by Babble.com, and PBS’s NextAvenue declared her one of the 25 best food blogs for baby boomers. She’s been featured in the Los Angeles Times, Sunset Magazine, Taste of Home magazine, on Yahoo Shine and has written for Huffington Post, America Online, Foothills Magazine, and has had a 20-plus-year food column in Southern California newspapers. You can connect with her on Facebook, Instagram, and Pinterest.

Where do you purchase your kale seedlings or other veggie seedlings?

Angie,
I buy mine at the local gardening store. But you can also grow them from seed.

this article is great. I’ve always wanted to plant kale because my mom and I already have a lemon tree and mint growing nicely.Adding kale would be nice for the cost and being free pesticides for one vegetable.

Shirley,
Exactly right! You can grow kale without pesticides (don’t worry if there are a few holes from bugs…just wash the leaves and carry on). And it is so convenient to walk out to the garden and pick only as many leaves as you need at the moment.

Hi! There is a group working in both the US and Canada to establish (Inter)National Kale Day for October 2. Check it out nationalkaleday.org

Meggie,
That is great to know! Will go and check it out right now!

I love that you’re using whatever garden space you have to grow your own food! I agree that we’re lucky with the mild Southern CA climate… should make the most out of it!

I currently have lettuce growing in my front yard, right next to the roses bushes. 🙂

Kale is in the backyard, right next to where the chickens live.

Beautiful kale and so inspiring! I love the variety of recipes you shared, too – can’t wait to try some. Happy Kale Day!

Hannah,
Thank you for the compliments! Please do try some of the recipes!