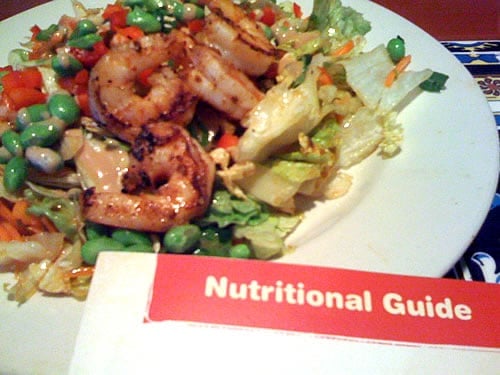 Yesterday I found myself quite hungry and ready for dinner, but the only viable option nearby happened to be a Chili’s.  I hadn’t been to one in quite a few years, and I figured it would be good research.

We walked in and asked the host if they had nutrition information.  He had a stack on the counter, right next to the menus.  As he handed it to us, he quietly said, “Here you go, but you probably won’t stay after you read this.”

We then spent five minutes looking through the pamphlet, figuring out what to order.  I was determined to prove that it is possible to have a reasonably healthy meal at Chili’s.  It wasn’t a perfect macrobiotic plate, but it was relatively healthy, tasty, and satisfying.*

Chili’s has offered “Guiltless Grill” options for a long time — I remember years ago in Chicago they had a separate section on the menu with that title, and also listed the calorie counts right on the menu.  Yesterday’s experience in Southern California was a little different — they had a little chili icon next to the GG items, which indicated that they were under 750 calories, 8 grams saturated fat, and 25 grams total fat.

Even though the GG menu is better, they still don’t limit the insanely high amounts of sodium, so I recommend you double-check the nutrition information and keep that in mind.

Take Note: If you eat three times a day, 750 calories is approximately what you should be eating at each meal…so anything that’s not a “guiltless grill” item is a splurge.

The lowest calorie appetizer is the nutritionally-devoid Bottomless Tostada Chips with Salsa, which clocks in at 480 calories.  The next least-caloric options are the Southwestern Eggrolls with Avocado Ranch (910 cal) and the Skillet Queso with Chips (920 cal).

Every other appetizer is over 1,000 calories. The “Triple Dippers” at first glance look better (410 to 800 calories), but you actually get THREE of them per order.

Most of the salads are high in calories, fat, and sodium – not much of a surprise.  However, the Caribbean Salad and the Asian Salad can both be ordered “Guiltless,” and you can add Shrimp, Chicken, Salmon, or Steak on top, which turns this into a fairly hearty, relatively healthy plate.

We ordered a GG Caribbean Salad with Shrimp, but were served the Asian Salad.  I forgot to ask for the dressing on the side, and it was drowning in it — to the point where it was hard to eat because it was so overpowering.

The soups aren’t too bad, though they’re high in sodium.  These numbers do not include crackers.  Double these numbers for a bowl.

The Smoked Turkey on Chile-Pepper Roll Combo (with Soup or Salad) would be a runner-up here, with 810 calories, except it also has 2,220mg sodium (about a day’s supply).

Everything else in the sandwich category

Everything’s Better On The Grill

Create Your Own Combo

This is where it’s possible to make a plate that’s pretty good, if you’re careful. You get to choose two proteins, and they come with Seasonal Veggies (steamed broccoli) and a side of Mashed Potatoes by default.  Sub out the fatty & salty potatoes for a better side — see below for good side dish recommendations.

Yesterday I doubled up the Shrimp, had the surprisingly good broccoli, and got a cup of black beans instead of mashed potatoes.

All the other combo options

Sadly there are no Guiltless options to be found here. When served on a white bun with fries, they range from 1,260 calories and 62 grams of fat (Oldtimer®) to an it-would-be-funny-except-that-it’s-real 2,130 calories and 139 grams of fat (Jalapeño Smokehouse Burger with Jalapeño Ranch).

Add Spicy Garlic & Lime Shrimp to any entrée (3 each)

The “Sweet Shots” are the lesser-of-the-evils here.  If you’re indulging, three of the four “Sweet Shots” aren’t too bad.  Here’s something to remember:  The longer the name, the worse it is for you.

* After we finished eating, we were quite full and satisfied; however, about 90 minutes later, we both were hungry again and also kind of queasy.  Very strange…

** A note on Salmon: The Salmon that Chili’s serves is most likely confirmed as farmed, and therefore should be avoided.  Check out this important fact sheet on farmed salmon from the Monterey Bay Aquarium (PDF).

175 shares
Fennel, Leek, and Zucchini Soup
Who decides what you can and can’t eat?

If you ask…they have a secret menu…ask For the black bean burger..it’s awesome…they will make it any way with any bread…or substitute it for any meat

I doubt you’ll be able to respond today ;( but does the sirloin calories you posted include sides?! I’m going out with friends tonight and that’s good to know.

Sorry, but the calories listed for the sirloin are without sides. Hope you had a good time with your friends, no matter what you ordered. 🙂

We visited my brother and sister in law they live in Kingsport 2 weeks ago, and now we are in Wailiki just about to go downstairs and order Chillis for the first time.. Life’s great!! Cheers Lindy and Tony from Brisbane Australia

Thanks for this great information! I am actually doing the unthinkable and eating at Chili’s EVERY DAY for a year! Today is day 17 for me, and I have lost 20+lbs so far! I enjoyed your write-up, it will actually help me out. Thanks! -Jared

Just heard back from Chili’s. Best to avoid the Salmon on their menu, unfortunately.

The salmon used at Chili’s is farm raised. We receive product from Chile and Norway.

Sidenote: It’s interesting that they call it “product.” Isn’t it supposed to be “food?”