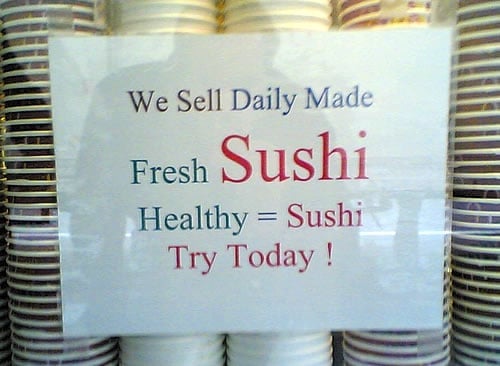 Depending on what you order, Sushi can be a healthful and satisfying meal or it can be a calorie-dense feeding frenzy of fat and sodium.

Beyond your own health, there’s the health of the fish and the oceans to consider. Some seafood species are plentiful and sustainably harvested, others are severely overfished, some species are irresponsibly farmed, and still others contain so much mercury that you should never eat them.

Since those guides are so thorough, I’m going to focus primarily on the personal health aspects of your choices – so here are my recommendations for how to make healthy choices at a sushi restaurant.

Easily the best appetizer.  High in protein, fairly low in sodium (even with the bit they sprinkle on top).

Seaweed Salad
The shredded kind that’s fairly common has some sugar added — so you may want to ask exactly how they do their salad. Depending on how it’s prepared, it can be a great way to start your meal.

Cucumber Salad
You may want to check on the dressing and decide from there.

Miso Soup
Although it’s low in calories, it’s very high in sodium — and not very filling.

I think it’s okay to ask if they’ll make your sushi with brown rice instead. Sushi purists will scream when they read that, though, so proceed with caution.

Skittish about offending the chef?  Simply order Sashimi — sliced fish without any rice. Problem solved, and you’ll look like a pro.

White Rice
Calorie dense, with little other nutritional value.  One cup of rice (which isn’t all that much!) has about 240 calories.

Keeping in mind that almost all rolls are made with rice (see above), most of the other ingredients used in rolls (whether cut rolls or hand rolls) are great for you — so it’s really more of an issue of what type of not to get.  Here are some good choices:

Any fish that’s not overfished or laden with mercury is likely a healthy choice. Some good options: Wild Alaskan or Washington Salmon (Sake), U.S. or Canadian Albacore (Shiro Maguro), U.S. Atlantic or Gulf of Mexico Mackerel (Sawara). Check out the resources in the introduction for more guidance.

Nigiri
Nigiri is the “hand-formed” sushi with a small cube of rice with the topping (usually seafood) on top.  Only reason it doesn’t get a green check mark is because of the rice.

They usually add a little sugar to the egg — but even so I’d consider it a good choice.  I like getting it last because it’s a nice way to finish off the meal and the sweetness adds some nice variety. Get it as sashimi instead of as nigiri and avoid the rice.

Vegetable Rolls (Maki)
Any kind of basic vegetable rolls are great choices. Only reason they don’t get a green check mark here is because of the rice.

That delicious spicy sauce?  It’s made mostly of mayonnaise!

Tempura translates as “Battered and Deep Fried.”  Next!

Rolls with cream cheese add a ton of saturated fat and calories to your meal.  Best to skip those.

Severely overfished and high in mercury, as a responsible diner you should completely avoid this one, sorry.

At the top of the food chain, swordfish is another that’s on the “never” list due to its extremely high mercury content.  Again: Sorry.

Okay, so you ordered the Flaming Dragon Double-Rainbow Roll.  You just paid $18 for one over-the-top fancy-pants roll laden with cream cheese, tempura, spicy mayonnaise, and a sweet brown sauce. It’s the perfect storm. Go simple and traditional and you’ll be much better off!

The green horseradish is great — a little goes a long way.

Pickled Ginger
The ginger is there to cleanse your palate between bites.  As with the wasabi, a little goes a long way.

Lower-Sodium Soy Sauce
There is no such thing as “Low Sodium” soy sauce.  It’s “Lower” sodium — meaning, it still has a tremendous amount.  So dip sparingly!  If there are two bottles on the top, the one with the green top should be the lower-sodium sauce, so it pays to start there.  Also, don’t dip your rice into the soy sauce — dip the fish.  It’s actually proper form, and you’ll soak up significantly less salt.

It bears repeating:  The Spicy Chili Sauces are made with high-fat mayonnaise.  Avoid them!

One tablespoon of regular soy sauce has over 1,000mg of sodium!  Filling that little dish probably  means you’ve poured out three or four tablespoons of sodium —  far more than a day’s worth!

One of my favorite sushi restaurants in Los Angeles serves up complimentary orange wedges (pre-peeled, on a toothpick).  It’s a perfect, sweet bite to finish off the meal.

Mochi Ice Cream
If I really want dessert, I may go for the Mochi, since it’s a more unique flavor and it’s often a smaller serving size than regular ice cream. Careful, though, it’s still high in sugar and fat.

Menu Mondays are my recommendations for the most healthful options at restaurants. Although it may be tough to find “perfect” options when eating out, it’s important to choose “better” whenever possible, and I hope these guides will help make that easier for you.

Hey Andrew, out of curiosity, what do you think about torched sushi? Is it recommendable and healthy? I’ve had torched toro and scallop and I think flavor is elevated.

“Torched,” as in hitting the fish with a blowtorch? I haven’t actually come across that yet, but I’d bet it’s delicious!

My only concern — and this is a very mild one — is that burned/charred bits of food may be carcinogenic. Though I have a feeling we’re talking about such low quantities that it’s not really an issue, so I wouldn’t worry about it too much. 🙂

Thank for the information. I will now make better selection when purchasing maki rolls. I must be careful of my sodium intake. Thanks again!

what an article! so glad to know what my options are at sushi restaurants going forward!

Hi, great post. I am a recent viewer of your blog. Surprised you didn’t add Sriracha as a spicy sauce option. It is extremely low in calories/fat/cabs/sugar per tbsp. Plus, a little goes a long way as it’s SUPER spicy. Just a friendly suggestion for a GREEN check mark option 😀

I actually haven’t seen Sriracha at a lot of sushi restaurants. And it does have quite a bit of sodium. What disappoints me about it more, though, is that they add preservatives. It’s still going to be a better choice than the mayo-laden “spicy” sauces they use in things like spicy tuna rolls!

I don’t like sushi but, I love california rolls and other types of rolls, do you have any information you could provide on that?

Hi Kim, The Nori (seaweed) that they wrap the rolls in is certainly very healthful — it’s just a vegetable. There are two big pitfalls with Sushi Rolls (both “Cut Rolls” & “Hand Rolls”). The first is the white rice — it adds up awfully fast. If you’re in a new-age sushi shop that will use brown rice, then that problem’s solved. More likely, the better advice is not to overdo it on the rolls. The second problem is the various sauces that are often added to rolls. Spicy Tuna Rolls are the most notorious offender — the spicy sauce is mostly mayonnaise. (Though I did have a spicy tuna roll recently that was fantastic — just tuna and jalapeño, the way it should be!). So if you stick to the more basic rolls (yes, even California Rolls), then you’ll do okay. Just avoid anything with the spicy sauce, cream… Read more »

California rolls are mostly made with artificial “krab-meat”, which as someone who avoids gluten like the plauge, I never indulge in. However there is more than a little gluten in your fake crab/krab . . . for those who want more information here are a couple blurbs: Ingredients Fake crab meat contains more than ground fish. To create a paste that holds its shape, food manufacturers also add starch from wheat, tapioca or corn, sugars and poor-quality vegetable oils. If you are gluten- or wheat-intolerant or have celiac disease, surimi is not a safe alternative for you. Imitation crab is a processed food and also contains various artificial ingredients, such as artificial flavorings, as well as sodium and monosodium glutamate, or MSG. Many people are sensitive to MSG, suffering from headaches, fatigue or numbness after eating food containing it. Source: http://healthyeating.sfgate.com/nutritional-quality-fake-crabmeat-1119.html Whitefish, water, wheat starch, corn starch, sugar, crab extract,… Read more »

Ouch. The “spicy” sauce is so good. I’ll just have to “make up for it” somewhere else.

This article is a joke and an insult to the art of making and consuming Sushi.

Ashely I totally agree with you