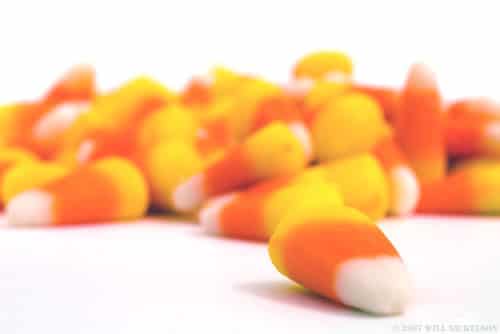 With the recent uproar about the Corn Refiners Association’s goal of rebranding High Fructose Corn Syrup into the supposedly more appealing “Corn Sugar” name, and considering that avoiding HFCS is one of my three cardinal rules, I thought I might spend a moment today to chime in.

There seems to be a lot of misinformation about HFCS out there, and I think it’s time we started looking at the situation with a little bit of perspective.

Unfortunately, trying to determine whether or not HFCS is “evil,” as many opponents call it, is downright maddening.  I’ve spent quite a lot of time trying to find reputable, science-based evidence that specifically backups up claims that HFCS is worse for us than any other sugar, and I haven’t come up with much.

The folks who demonize HFCS can be particularly, well, evangelical. I frequently see people make anecdotal, emotional, and unsupported claims like “the body processes it differently” or “it’s chemically processed, therefore it must be bad for us” or they label it “a scourge” or “an abomination,” and so on.  There are usually a lot of exclamation marks.

The emphatic outrage following a post yesterday morning on the Center For Science in the Public Interest’s Facebook Wall is clear testament to that fact. (The uproar was over a quote in an AP article from Dr. Michael Jacobson, head of CSPI, in which he claims that HFCS is no worse for us than any other sugar.  Here’s a clarification of his position.)

But where is the evidence?

Let me be clear:  I’m not asking if HFCS is simply “bad” for us.  I’m talking about whether or not it’s worse for us than other sugars.

To date, I’ve only found one study, by Princeton University, that draws a conclusion that HFCS is indeed worse for us than regular table sugar (sucrose).  I have repeatedly asked people to send me studies that vilify HFCS — but so far, that Princeton study is the only (presumably unbiased) one I’ve got.

(If you know of any other studies that specifically implicate HFCS over other sugars, please send them my way!)

I was thrilled to read the Princeton article (ah-ha! finally some proof!), until I came across this skepticism of their conclusions by Marion Nestle, Ph.D., M.P.H., Professor in the Department of Nutrition, Food Studies, and Public Health at New York University.  The head of the Princeton lab that conducted the studies posted his rebuttal in the comments section.  So back and forth it goes, between respected experts, with no conclusive proof after all.

Dr. Nestle also posted on her blog yesterday about the HFCS rebranding; it’s worth the read. (In that post, she also reiterates that “HFCS is not poison.”).

It’s important to know that ordinary table sugar — sucrose — is composed of 50% fructose and 50% glucose (they bond together to form sucrose).  Most HFCS is about 55% fructose and 45% glucose (sometimes it’s a slightly different ratio).

Once we consume the sucrose, it is quickly broken down in our bodies to the fructose and glucose components.  Yes, there is an additional metabolic step, but it seems there is not yet any conclusive evidence that the extra step makes a significant difference.

Having said all that, I have seen several reports showing that fructose is indeed worse for us than glucose.  Here’s one story from Time Magazine, and another from Reuters.

But what really gets me frustrated is when journalists (or worse, scientists) jump from a “fructose is bad” finding to immediately singling out HFCS (as the Reuters article implies).

If table sugar has about as much fructose in it as HFCS, shouldn’t we be shunning table sugar with the same passion?

A sugar by any other name

So that brings us back to the recent uproar about the rebranding of HFCS as “Corn Sugar.” The Corn Refiners claim it’s to help alleviate consumer confusion. Although I’m loathe to agree with them, I have to say it kind of makes sense.

Considering the frequency of “fructose is bad therefore HFCS is bad” arguments, it seems there is a basic misunderstanding of the amount of fructose in HFCS when compared with regular table sugar.

Perhaps something good will come from this: Instead of merely blaming HFCS for all the added-sugar evils in the world, people will start to realize that all added sugars pose potential problems.

Seeing the forest through the trees

, wrote on her blog today that focusing on one ingredient over another misses the point.  She writes:

We need to stop obsessing over details like food labels, salt content, carbs, and grams of this fat vs. that fat. Instead, we need to talk about (and get the media to focus on) the importance of eating a whole foods (mostly plant-based) diet. One message scares Big Food more than any other: that people should be eating whole food that comes from nature and not from a factory. Industry really has no solution to offer, because their business model is based on processing nature, packaging it, and marking it up for high profits.

I’ve written before about why I do not eat HFCS — which is actually fairly well aligned with Ms. Simon’s point.  What I haven’t mentioned is that I also eat very little other added sugars.

Bickering over whether or not to avoid HFCS, and what to call it, seems futile at this point. Unless there is conclusive evidence (and perhaps there will be some day), it seems only prudent to try to avoid added sugars of all kinds.

Sure, it would be so much easier to blame all of our problems on high fructose corn syrup, but it seems to me that doing so is just burying our heads in the sand.

If you really want to take a stand, I encourage you to eat as little commercially-processed food as possible.  To get started, take the October: Unprocessed challenge!

Photo by will nickelson.

Jean at The Delightful Repast

Well, I’m not going to let myself be sidetracked by facts (smile), I’m just going to go on limiting my intake of sugars of any sort, natural or refined, and completely avoiding any corn-based sugars, whether high fructose or regular corn syrup.

Author
Andrew
Reply to  Jean at The Delightful Repast

Nice post! I have to say that while I am totally on the NO HFCS bandwagon, I also preach the same thing about other processed sugars.

I was a big advocate for agave for a long time, only to find out now that it’s possibly just as processed as HFCS! (You just can’t win these days!)

So now, I’m going back to maple syrup and honey, although I do only use them in moderation.

I have to agree with you that sugar of any kind (unless it’s a piece of fruit), is most likely not all that great for the body. As a clean eater, I make it a point to avoid processed sugars, but even honey and maple syrup can be damaging in excess.

I guess the point I’m making here is that we need to put down our lumps of sugar and start eating our veggies!

Worrying about (or arguing about) which sugar is “better” is focusing on the minutiae and missing the larger point: It’s much more the sheer quantity of the added sugars that are the problem, not the type of added sugars.

Having said that, I should reiterate that there is increasing evidence that Fructose is worse for us than Glucose. Which means that HFCS and Table Sugar may be equally “worse” for us than, say, regular Corn Syrup (which is essentially 100% glucose). The solution, still, is to eat less of all of them.

A very well written post!!! As for sugar, I am really hoping that this will put to rest this senseless uproar over HFCS. Sugar – whether it’s white, brown or HFCS is fine in moderation. As one of my professors once said “there are no “bad” foods – and she was right. The key of course for anyone is to make sure that they are “budgeting” their calories in such a way that they meet their daily nutritional requirements. If they can do that for fewer calories than they require, then sweets can certainly be part of a “healthy” diet. The problem of course is when sugar (or fat, or anything else for that matter) crowds out other nutrients. Like most things in life it is all about balance!

I’m not sure I’d call the uproar over HFCS “senseless” — my point was really more that the uproar should be about all added sugars, not just HFCS.

The key is absolutely to make sure that it’s all balanced and in moderation — but with the current food system in place, it’s increasingly difficult for people to be able to do that without extra time, resources, effort — and information. We’re up against a lot of obstacles, to say the least.

On a separate note, a few minutes after I posted this article, the Corn Refiners Association retweeted it. On one level, I’m flattered and excited that they noticed. On another, I’m kinda creeped out and feel like I need to go take a shower. 😉