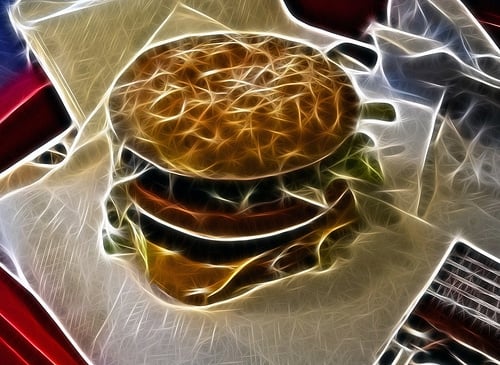 Instead of analyzing one specific restaurant on this particular Menu Monday, I thought it might be fun to make some apples-to-apples burgers-to-burgers comparisons of a few popular fast food chains.

I’m not encouraging you to visit any of these establishments — since only a trivial few of their offerings (none of which are mentioned here) might be worthy of a green check-mark at all — but I do think it’s interesting to see which chains are “better” and which are “worse” when it comes to some standard American fast-fare.

McDonald’s is the restaurant most often vilified when we’re talking about fast food — and with good reason: They pretty much invented it, and are the biggest player by a huge margin. They have more locations than Burger King, Wendy’s, Carl’s Jr., Jack in the Box, Fatburger, Sonic, and In-N-Out — combined.* (They also employ over 1.5 million people worldwide!)

So how does Mickey D’s compare to some of the other chains? The answer might surprise you.

To keep it simple, I’ve picked two options for each of the major chains — their “signature” burger and whatever is the closest I can find to a “regular” cheeseburger.  I’m also including a medium order of fries, so we can see how they stack up.  Frankly, I have no idea what the most popular menu items actually are, but I figure the Big Mac and Whopper (and similar) have to be near the top of the list, so it makes sense to compare them rather than some of the other (even larger) options.

I wouldn’t consider any of these items healthful (unless you’re suffering from kwashiorkor, which, if you’re reading this, I can just about guarantee that you’re not), and in fact this post could easily be read as an indictment of the entire fast food industry.

Nevertheless, there are some significant differences between the chains.  Some cheeseburgers, for example, can be nearly double the calories of others (In-N-Out vs. Wendy’s), and the sodium in the fries can vary by up to three times (Carl’s Jr. vs. McDonald’s).

The lists below are sorted by calories, and in each column the lowest numbers are green and the highest are red.

Although it’s not entirely consistent – and I must reiterate that these aren’t the only options at each chain – I think it’s noteworthy that McDonald’s is near the top of the list in all three categories. If you were to order a Big Mac and Medium Fries, you’d actually do better than a similar order at any of the other chains.

Sadly, In-N-Out performs poorly for both burgers, though their fries are the lowest in sodium which helps them a bit in the final tally.  Burger King may have the most calories (their sandwiches are some of the biggest), but Fatburger and Carl’s Jr. are the only ones over 2,000 mg of sodium (taking it from “too much” to “way too much.”).

One final disclaimer: This is an intellectual exercise — I’m not recommending that you eat any of these food products. Calorie intake should be around 1,500 to 2,500 (depending on your needs), saturated fat should be under 20-25 grams per day, and sodium should be under 2,400 milligrams. Those are totals for your the entire day, so I find it hard to see how any of these can be part of a healthful diet. McSigh.

I can read these blogs all day!! Great info!! Keep them coming :).

Besides fat and sodium, chemicals should be taken into factor too. McDonald lettuce is said to be sprayed with 13 chemicals to keep it green and crispy and their patties are questionable as well. Sadly they seem to be cutting quality with their foods but pouring money into their marketing campaigns. Not a fan, never will be again.

This is article is stupid. Do you people honestly think that McDonald’s is healthier than In-n-Out? In-n-out might have more calories, but at least they use fresher ingredients than any other big chain. Also, you are not require to eat a double double, you can just settle for a cheeseburger. In-n-out uses fresh ingredients and I am sure it is the healthiest fast food option. McDonald’s uses “pink slime” in their meat…enough said.

I realize I’m way late on this but what about a post comparing salads or other “healthier” options at the fast food places? As a recovering fast food addict, I’ve switched to healthier options at many places (like Wendy’s signature salads or McDonald’s Oatmeal). How do these stack up compared to each other?

That’s a great idea, thanks! I’ll add it to my to do list — though I won’t be able to get to it until after October Unprocessed! 🙂

It’s grea to see these stats all put together in one place. I don’t eat beef, but the fry comparison alone is enough to re-remind me why I don’t like to stop at fast food resterants when I’m traveling.

Another vote for Chick-Fil-A comparisons, both healthy and unhealthy. I can eat healthier there, but if I’m going to splurge on something fried, Chick-Fil-A is always my choice. I heard there 8 piece chicken nuggests is one of the lowest calorie fast food fixes?

Thanks for the feedback, and you’re right about the fries! They should be a treat, not something that’s a “given” at nearly every meal… and I’ll add your vote for a Chick-Fil-A review! Will definitely be sure to include their “nuggets.” 🙂

unfort. I cant include Chick Fil A in any of my choice due to their moral and ethical view points, so wont eat there out of principal. No matter how good their food is 🙁

I’m SO with you there. I don’t think their food is any good, of course, and I agree their social and political views (and funding) are even worse.

This is about comparing fast food not about one companys stand on moral issues.

Amanda – It definitely seems like In-N-Out is “healthier” than McDonald’s because their food is fresher. It very well may be, if you’re not looking at it just by the numbers. Fresher food, even at a fast food join, is generally better for you. I don’t know if their beef is any better than their competitors’, but their fries are indeed made fresh from whole potatoes. That should count for something, though at this point in nutritional science it’s impossible to quantify. (But even so, In-N-Out is just as much of a cheat meal as any other!) Michelle – I think you meant 1 gram and 2 grams… One fun way to put this in perspective: A teaspoon of table salt has about 2500 milligrams (2.5 grams) of sodium, about little more than your day’s max. So that BK meal has nearly a whole teaspoonful of salt. Nice, eh? Laya… Read more »

It’s not a big surprise about the sodium. I don’t understand why there is so much salt on everything. If you go a month without eating fast food, then you can hardly eat it at all because it tastes so salty. Not only would it be healthier with less, but it would taste better also.

Personally, if fast food is my only choice (and unfortunately, sometimes it is) my place of choice is Chick-Fil-A. I can get a guaranteed fresh salad (since other fast food salads are very hit and miss) and one of two low fat dressing choices and come away satisfied, while my friends indulge in the fried offerings and full fat milkshakes. Plus sugar free lemonade (if you don’t mind Splenda, that is)!

Interesting to see that all of the burger + fries combos are over 1 mg of sodium, and some over 2 mg! No surprise that one would order a soda to wash that down!

So sad about In n Out, in Cali we tend to snub fast food more than other places I have lived, but In N Out is like this exception everyone makes, and somehow we like to think it is healthier, at least than McDonalds 🙁