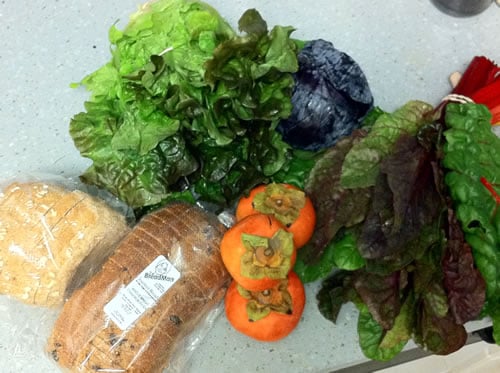 I have something embarrassing to admit. Although I’m a huge fan of farmers’ markets — and have promoted them quite a bit on this here blog — until today I had never actually been to my local farmers’ market.

There, I said it.

Sure, I’ve been to farmers’ markets before.  But after living in the same spot for eight years, I only just recently found out about the nearby Westchester Farmers’ Market — and it wasn’t until today that I actually went.

For the past year and a half, I have been using an organic delivery service, which brings a customizable box of organic fruits and veggies to my door every other week. With that kind of convenience, and with us barely able to get through all that food before it went bad in our fridge, I couldn’t really justify buying more produce at the market.

The delivery service isn’t horribly expensive — $28.50 for a fairly sizable box — but I always had a gut feeling I could do better at the farmers’ market.

Recently I put the delivery service on hold for our vacation, and I kept it on hold this week.  The timing finally worked out: “Today, I will go to the market!” (said the voice inside my head…)

In a total rookie move, though, I forgot to get some extra cash (and I had even stopped at the bank just before! Doh!).  As I got out of my car, realizing I only had $11 in my wallet, I figured I was only going to get a small sampling at best.

It’s a fairly small market, as these things go — maybe about 20 vendors or so.  About half were selling fruits and vegetables; the rest were offering items such as hot foods, flowers, potted plants, crafts, and jewelry. From three different vendors, I purchased:

You might have noticed that this totals $12, not $11. I had purchased the produce first, and then walked over to “The Breadman.”  Although the loaf and a half totaled $7, the jovial baker saw that I only had six bucks left in my wallet, and he said that was fine — I could bring him an extra buck next time I came to the market.

Could you imagine something like that happening at Vons, Ralphs, or Whole Foods? Me neither.

The produce is fresh and crisp, and the bread is divine.  The ingredients in the Cinnamon Raisin Bread are simply: Whole Wheat Flour, Raisins, Honey, Cinnamon, Yeast, Sea Salt. (I’m guessing he also uses some water).  But that’s it!  It’s moist, dense, chewy and I’m having trouble not eating the whole loaf. You can’t get that at a large chain grocery store, that’s for sure!

There was also something incredibly satisfying about picking up some produce from the table and then simply handing over a couple of dollars in cash. It was a personal transaction. No cash registers, no barcode scanners, no credit cards. Reminiscent of a bygone era, it felt incredibly… satisfying.

I’m hooked. It’s time to cancel the delivery service and head out to my farmers’ market every Wednesday instead. I’ll be sure to bring an extra dollar with me next time, too.

Want to find your local farmers’ market?  Check out the USDA’s search tool or Local Harvest.

It’s amazing how far your money goes at a farmer’s market. And the quality is always above and beyond what I find in my grocery store. Once while visiting San Francisco (I live in Kansas City) we went to the big market on the pier. It was amazing. Even as a tourist it was fun to pick up fruit to snack on through out the day and we bought cheese, bread and preserves to take home to our friends as souvenirs.

Definitely! Had I spent all of my $11 on whole fruits & veggies, I would have come home with much more than I could have easily carried.

Did Westchester FM make their hours better? When I was there it was only 8-12. So hard to get there as a 9-5er. Check out the farmer’s market at the Vertern’s place in Westwood. It was on Thursday and always good prices! And they have a parrot rescue in the same spot!

Their website says 8:30am to 1pm, but their weekly emails say 8:30am to 1:30pm. I’d love to go to the one at the VA in Westwood, but that’s actually about a 20 minute drive. And a parrot rescue? Awesome, except I might actually come home with another bird, and I’m guessing Dudley wouldn’t like that too much. 🙂

There’s another in Playa Vista (on Saturdays, I think), but I boycott PV because they’ve destroyed (and are continuing to destroy) the wetlands. I should find out if the evil corporation makes any money from the farmers’ market, or if the farmers get to keep it all…That would certainly change my opinion on it.

Welcome Farmer’s Market newbie! I was a dollar short this Sunday at my Farmer’s Market, but Holly still sold me her beautiful jar of freshly dried herbs. I love the community and relationships you develop from being a regular. Funny, though I just signed up for my first delivered CSA today (just for the experience).

Thanks. I totally need to become a regular… I can’t see a single reason why not! 🙂

From what I have heard, there aren’t too many good CSA options here in Los Angeles, oddly enough. (Someone please correct me if I’m wrong!). Let us know how it works out for you!